“What’s Next for the World Economy” 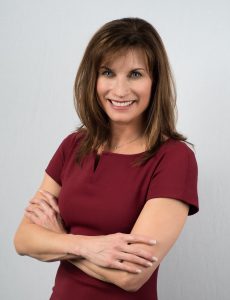 Acting President Chuck Barnes opened the meeting. The invocation and pledge were led by Erik Strom, while the guests were introduced by Kevin Polzin.

Wendi Fischer shared a new hands-on project for BBRC members – collecting toiletries when traveling to put packets together later in the year for the homeless. Items can be shampoo and conditioner, soap bars, etc. from hotels and toothbrushes, dental floss, etc. from your dentist.

And we have three new blue badges for the club – Kevin Klustner, Andrew Face (second time around) and Sam Peterson! Their red badges were turned in as they met all the requirements to be promoted – good job guys!

Erik Strom gave a short introduction/bio so we all know him better. Desiree Yuzawa deftly auctioned off the monthly speaker sponsorships for the upcoming (2019-20) Rotary year. Thank you to all those BBRC members committing to a month for their contributions.

Next Chuck recognized May birthdays and BBRC member anniversaries! And last, that resplendent Cougar in a WSU sweatshirt, Kit Bowerman, reminded everyone to sign up for the Rotating the Wheels Party, to be held on Saturday evening June 29 at Newport Shores Yacht Club! The theme is a “Tailgate Party”! All are invited, not just Huskies and Cougars!

Fred Barkman introduced our speaker for the day, Michelle Mathieu, Chief Investment Officer for Fulcrum Capital. Joining us as well was Darcy Johnson, the Founder of Fulcrum Capital. Michelle’s subject – “What is next for the World Economy?”

Where is the economy today? What is the reality? Are there storm clouds?

The reality is in 2018 almost all asset classes were down. Michelle showed us that only cash had a positive return and it was under 2%. However, in 2019, all asset classes are up and the one up the least is cash. This has been the fastest recovery since World War II and the Federal Reserve since the beginning of the year is on the sidelines,

Michelle then showed a picture of her hero, Mary Lou Retton (US Gymnastics superstar). The quote was “The comfort zone is a dangerous place to be”! When things feel safe, we get over-confident but you do not want to overreact!

Michelle recommends it’s best to ignore the short-term. Why? Since 1990, there have been 17 corrections in total but only 5 corrections coupled with a recession – 12 did not have a recession. That is why you look at the long term!

And what causes a recession? Usually there are 3 risks – consumer spending, a policy mistakes or an outside event that causes external shock. Michelle gave examples to each of these. Consumer spending is about 70% of the US economy. A policy mistake would include interest rates, regulation or trade barriers. The external shock could be caused by a major debt default, currency crisis or a 9-11 type of event.

Michelle shared data that shows the consumer is in great shape – consumer confidence is still expanding; the household debt service ratio remains low and household net worth has increased 54% over the last 12 years. There also are not presently policy or external factors that would cause a recession. And employment is still going up!

Michele than pointed out the drivers over the years of GDP and productivity growth (growth in workers + growth in real output per worker) – from 1968 to 1977 it was women joining the workforce; from 1978 to 1987 it was personal computers and additional women in the workforce; from 1988 to 1997 it was the emergence of the internet; and from 1998 to 2007 it was the growth of E-commerce. However, the GDP growth slowed from 2008 to 2017, believed to be due to the drain of social media. The thought is growth again in 2018 and beyond will be fueled by the sharing economy – Lyft, Uber, Airbnb, etc.

And the cartoon at the end of Michelle’s presentation shows a meeting with your financial advisor – Advisor “I’ve crunched the numbers in your retirement account. It’s time to figure out who will be wearing the mask and who will be driving the getaway car!”

Michelle is a 25-year veteran in the investment industry and has what easily could be called a storied career. Michelle has led three different investment firms, co-managed two equity mutual funds, and served on a half-dozen nonprofit boards. Michelle started out in the banking industry, managing money for institutions and private clients. In 2002 she was tapped to launch the new investment advisor and trust company for the law firm Perkins Coie. Nine years later, she was ready for another challenge. Michelle joined The Rainier Group in 2010, where she served as a Principal and lead advisor until the company was sold two years ago.
Michelle joined Fulcrum Capital as Chief Investment Officer in January 2017. Fulcrum Capital is a comprehensive wealth manager headquartered in Seattle serving about 80 individuals, families and nonprofits. Since she joined the firm, Fulcrum has more than doubled in assets and is now the 7th-ranked emerging wealth manager in the country by growth and assets according to RIAChannel. On that list, Fulcrum is the #1-ranked firm in the country that is women-owned.
Michelle’s accomplishments are all the more remarkable when you realize how male-dominated the investment management industry is. Fewer than 1 in 3 wealth advisors are female, and half of advisory firms don’t have a woman advisor at all. Of independent advisory firms, only about 20% are majority-women-owned and led. Only 16% of CFA charterholders in the U.S. are women, and only 10% of all U.S. fund managers are women.
Michelle studied economics at Whitman College in Walla Walla and international politics in Freiberg, Germany. She is a member and past vice-chair of the Whitman College endowment investment committee. In addition, Michelle is Chair of the Diocese of Olympia Investment Fund and a board member for the King County Library Foundation. In her combined roles, she oversees more than $1 billion in assets for 70 private clients and 10 nonprofits.
Michelle holds the Chartered Financial Analyst and Chartered Alternative Investment Analyst designations. She is also a past president and board member of the trade association CFA Seattle.
Michelle does enjoy wine, but she’s not a snob about it. In her free time, she also enjoys reading, skiing, hiking, fast cars, and especially dance.