“Making a Diamond From a Lump of Coal” 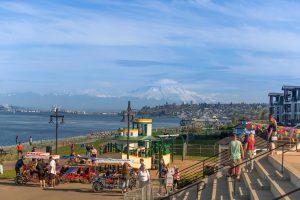 LeiLani Jackson-Lee, a retired school administrator and member of the Sunset Rotary Club of Tacoma, spoke on the development of Point Ruston, near Tacoma, “Making a Lump of Coal into a Diamond”!

Point Ruston was home to a large-scale copper smelting operation from 1890 to 1980. In 1983 after almost 100 years of continuous operation, the EPA declared the smelter a Superfund site. The primary contamination was concentrations of lead and arsenic in the soil, and seepage into the shoreline. The clearest path to harvesting value from the polluted site was to negotiate a clean-up with ASARCO, the owner of the copper-smelting operation. With numerous steps in the process, multiple sites ASARCO was responsible for cleaning up and ASARCO’s bankruptcy, the story of how the developer undertook the challenge and cleaned up the site was central to the presentation.

Thanks to the vision of Mike Cohen, the Founder of MC Construction and now the Managing Partner, Point Ruston LLC, Point Ruston is being developed into a mixed-use community with waterfront and panoramic views of South Puget Sound, the Olympic mountains and Mount Rainier. On the waterfront, the park there will be connected to Pt. Defiance Park. In this resort inspired village are condominiums and a growing number of street level shops and restaurants, including the nine-screen Century Theatre. In the future, additional condominiums will be built as well as a resort-style Silver Cloud Hotel, Public Market and a GenCare Retirement facility.

From “Superfund site to Super-fun site” Point Ruston is an impressive solution for this valuable property on South Puget Sound.

After the meeting was opened by President Chris Boland, Tom Leonidas did the invocation and flag salute while Jonathan Heras introduced visiting Rotarians and guests. Steve Roberts presented David Bowling of Congregations for the Homeless with a check to pay for 5 washers and dryers for their facility.

Colleen Turner discussed the great turnout for the All in For Autism fund raiser along with Girish Bhatia. Congratulations to them both for their great efforts! A story was told how Steve Roberts had his car locked in a downtown parking garage the night before the run with all our signs for the event. John Hall to the rescue as he was able to duplicate the signs overnight in time for the run on Sunday morning. Way to go John!

President Chris reviewed the retreat from the previous weekend as well as some Rotary facts. Last, John Martinka reminded us of the Third Thursday event on Thursday, May 16 at Henry’s Tavern in Bellevue! The fun starts at 5 PM! Fellowship is alive and well!

LeiLani Jackson Lee is a retired school administrator. She has been an educator for over 50 years. She was a principal in Tacoma Public Schools, the Bethel School District, International School of Sacred Heart in Tokyo and the University of Washington, Tacoma. She and her husband, Spencer, live at Point Ruston. She is a member of the Sunset Rotary Club in Tacoma. As a Certified Mediator, she volunteers in Small Claims Court. She is also a Franciscan Hospice volunteer. Hobbies include snow skiing, biking, reading, and traveling.