"The Changing Face of Media" 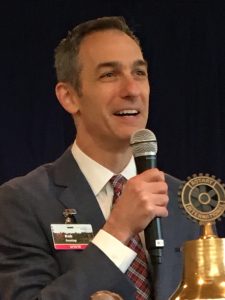 Kicked off the meeting with acknowledgement that out good weather did not follow President Kaj Pedersen from Helsinki, but was in fact thanks to Dick Brown who was with us this morning!

Tanya Franzen-Garrett led our invocation this morning and reminded us about Father’s Day and to celebrate the day.  She asked us to have a brief moment of silence as we reflected on those fathers and father-figures who influenced our lives, before leading us into the pledge.

Steve Szirmai introduced our guests this morning, including Parshanth, a visiting Rotarian from India.  We also had a representative from Microsoft, Alon, who was part of the team that supported our volunteer call in the recent Ai4A event.  We very much appreciated the support from the company.

Steve Goldfarb was called up to provide the vocational minute this morning.  He told us about his journey into the Jewelry business, which include anecdotes about his father decision to open up their shop in Bellevue (in 1980), which was considered a bold move at the time.  Steve showed how, as a small businessman, his involvement within the community and across all levels of the business helped shape his perspective and understanding of the impact his business is making in the community.

President Kaj had the wonderful opportunity to welcome back Andrew Face as a member of the BBRC,  after a hiatus.  We issued him his

membership card and new Rotary pin.  At this point, Andrew Face was invited to provide the club with an update of what has been happening during his time away from the club.  Andrew ended his update with a call out tot he club that there is an opening for a bass played on the house band, which he assured us will be coming back to life.  We are thrilled to see him back in our fold.

Before Andrew was allowed to take his seat, Jeff Cashman awarded him with his Paul Harris Fellowship.  An award that we had not been able to provide him before he left the club.  It is always wonderful to see another member become a Paul Harris Fellow at the BBRC and a belated congratulations to Andrew on his achievement.

with RFH and implementing computers at their food banks. This is as a result of some spare travel funds available through the Computers for the World, which became free as a result of the Antigua government not providing internet to the schools.   So, John has re-purposed the funds to support a project with a local organization that is well-liked within the BBRC.

Next up was Adam Mhilstin who provided the club with an overview of the Community Service team this Rotary Year.  There list of projects and accomplishments was impressive and it is a testament to the dedication of this committee’s members.  Adam finished off with a call to action for the members to join him with a hands-on project this Saturday at the Tavon Learning Center – we donated $2000 district grant to the group this Rotary year to support their efforts.  President Kaj thanked Adam for his leadership for the Community and Vocational Services committee, which had done tremendous work on behalf of the club.

After last minute announcements, included a shout out for the Highland Fling RTW, on 30th June, reminding members that the price was going up this weekend from $35 to $50.  So do not delay to make sure you lock in a great price for what is going to be a big fellowship event for our Rotary year.

John Martinka then introduced our speaker, Rob Dunlop, who

spoke to our club about the “Changing Face of Media” and it was a well delivered speech on the topic, especially in terms of the changes  for our media over the years as the models of consumption have changed. We certainly appreciated the balanced perspective and insights from Rob.

President Kaj finished the meeting by thanking our guests for attending, and delivered a quote from Winston Churchill, whose observation on media were well know, “A lie gets halfway around the world before the truth has a chance to get its pants on.”

Rob serves as President & CEO of Cascade Public Media, serving audiences throughout western and central Washington, and British Columbia. Since joining Cascade in September 2013, he has been focused on redefining the organization’s mission, strategy, resources, and community impact. The company has pivoted from traditional television production to digital storytelling; acquired online news organization, Crosscut; and has opened an innovation center, Hive Media Lab.
Prior to joining CPM, Rob served in a variety of roles at Fisher Communications over his 22 years with the company. Prior to its sale in 2013, Rob was Executive Vice President, Operations responsible for driving operating results from the organization’s television, radio and digital media properties; crafting its strategy and technology path; and overseeing M&A and real estate. In his other capacities at Fisher, he served as Senior Vice President of Operations, Vice President of Developing Media and Vice President of its radio division. Prior to Fisher Rob worked for The Research Group as a consulting, with WSYX-TV as a television producer and with WTVN Radio as an on-air host.
Rob serves on the Board of Directors of BroVo Spirits, a craft distillery headquartered in Woodinville, WA specializing in botanical liqueurs, amaro and vermouth. The company ships to over 25 states in the U.S. and Canada and recently won the 2018 Alchemist Award from the American Distilling Institute. He also serves as the company’s CFO.
He received his BA degree in industrial/organizational psychology from The Ohio State University in Columbus, Ohio and later an MBA from the University of Washington in Seattle, WA.