"Not Just for Games: Virtual Reality and Medical Applications" 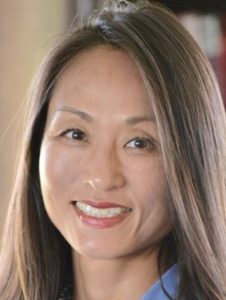 We were dragging this morning!  Everyone was in such a positive mood that we still had half the membership talking at the kick off time for the meeting this morning, so we allowed for a couple of minutes to get settled down.  Steve Roberts then led the invocation and pledge, before ceding the floor to Colly Radford who introduced our guests this morning.  We were honored to host Bellevue’s Deputy Mayor this morning, Lynne Robertson.

President Kaj asked Rourke O’Brien to lead the meeting by updating us on his recent visits to a couple of other Rotary clubs, where he exchanged flags with them.  He brought back the flags for our club as well as updating us on the experience he had at both locations.

Martin Clavijo was next up this morning with an update on his latest project in Colombia, where he helped a local Rotary club in Bogota, Colombia launch a computer lab in the slum area of the city.  Martin provided us with an overview of the problem in the area and how it has grown to become a fifth of the total population of Bogota city.  It is hard for peopl

e to escape the slum life, especially with the many challenges to overcome that include the gangs and other groups who take advantage of the younger population.  This project will help to provide an avenue for the children to learn computer skills as they find opportunities to escape the streets.  This is the second Peace project that Martin has led in Colombia and provides a wonderful example of how the BBRC can make an impact in other parts of the world.

President Kaj then took the opportunity to induct Stephanie Roberts into club membership.  Stephanie will be joining us with the classification of Marketing – Full Funnel.  Stephanie is vocationally involved with the American Marketing Association and has been looking for an opportunity to become active in the community, where she can leverage her professional experience to make a difference.  Stephanie finds enjoyment in design and painting, as

well as volunteering in support of good works.  We are excited to have her join our club, where there will be plenty of opportunity for her to put her talents to work in Service above Self.  Please take time to welcome Stephanie to the club and engage her in our activities.

Our Rotarian of the Month will be Chuck Kimbrough.  Chuck has long been involved with the Adoption Party, since its introduction during Margie Burnett’s Presidency.  He has continued to champion this amazing event that brings kids waiting for adoption together in a safe environme

nt, where the potential for meeting their forever families may happen.  We have had tremendous success with this program at the BBRC and Chuck has been actively campaigning beyond our District to spread the program to other clubs within Rotary.  For his continued passion and involvement in championing this cause, we honor him with ROTM for June.

Before handing off to our guest Speaker, President Kaj called to attention the magnificent spread in the Bellevue Lifestyle magazine that paid tribute to our very own Steven Goldfarb.  Steven offered to pay $10 to the BBRC for anyone who brought a copy of the article to him at his Jewelry Shop in Bellevue – I have attached it here for you to do so: Bellevue Lifestyle Magazine.  Steven Was not able to get off without paying his $10 bounty to the club this morning either :-).

Rourke O’Brien introduced our guest speaker, Dr. Angie Song, who introduced us to the application of virtual reality in medicine.  Her talk took us through the history of VR, before giving us a number of wonderful examples of where the capability was being used in healthcare today.  She was also mindful of the fact that we have some way to go with the technology before it will replace the value or importance of healthcare professionals in their practice supporting their patients.

President Kaj thanked our speaker and ended the meeting with a quote from Charles Darwin: “It is not the strongest of the species that survives, nor the most intelligent, but the one most responsive to change.”

Angie grew up in the Pacific Northwest after immigrating from South Korea at the age of 5. She lived in Germany as an elementary school student and fondly remembers her weekend travels with her family to various music festivals. She attended UC Irvine for college and earned her medical degree from George Washington University. She served in the US Army as a medical officer and was the President of the Hawaii Otolaryngology Society while stationed in Hawaii.

She has always loved teaching from tutoring in college to training young surgeons while in the Army. Serving in the Army and being married to a West Point graduate has led her family from Hawaii to Texas. While in Texas, she worked for the Central VA hospital and entered private practice. After relocating to the greater Seattle area in 2010, she joined Swedish medical group and is now in private practice.

Her two active sons keep her busy with year around sporting activities. She loves to engage in community events whether running in local running races, being involved in school functions or attending charity events. When not working, she enjoys running, skiing, reading and cooking.