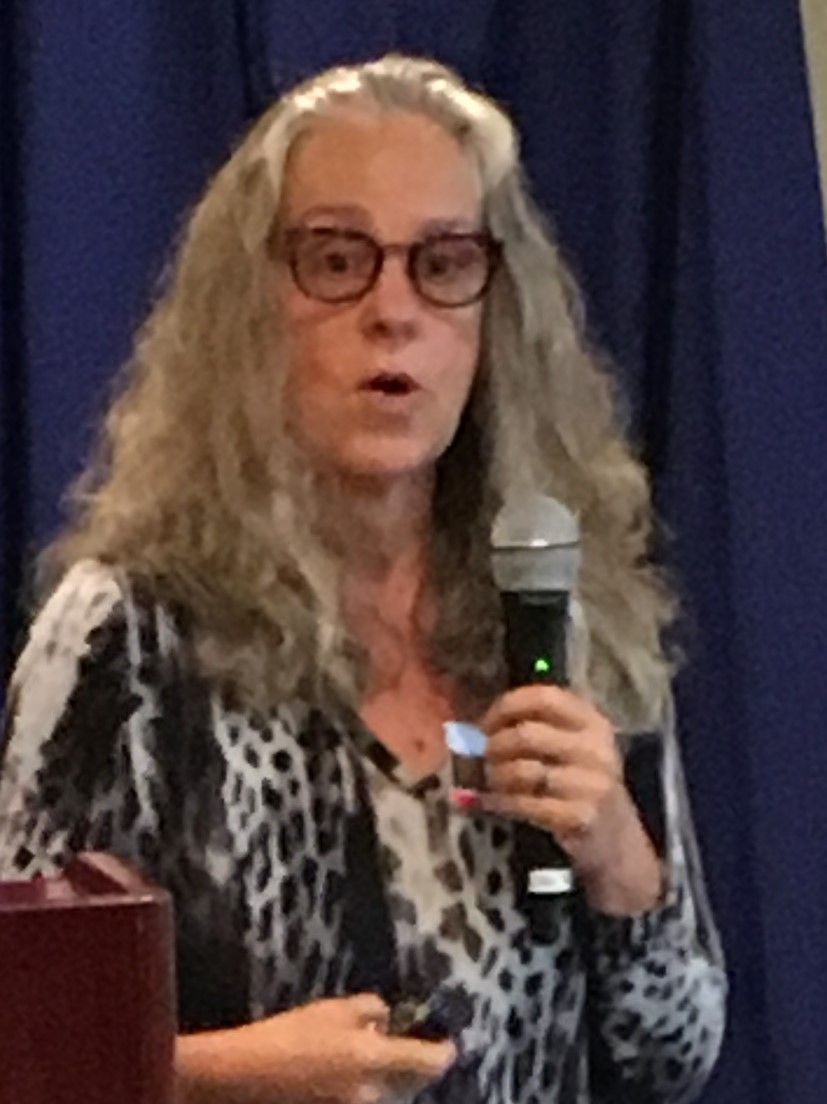 President Kaj kicked off our meeting by acknowledging Ruben Ladlad’s successful graduation from the Rotary Academy. This is a unique training program that is offered within District 5030 to help develop Rotarian’s understanding of the labyrinthine Rotary organization.  It is an excellent program that helps develop our leadership talent within Rotary, and it is not an easy endeavor to take on, which makes Ruben’s achievement a worthy one.

Up next was Kit Bowerman with our invocation and pledge to the flag this morning.  He was followed up Jonathan Heras who introduced our guests and had some fun with questions, so we could get to learn a little more about them.

After the formalities were completed, President Kaj walked to Carmela who was dressed as one of Santa’s helpers this morning, clearly ahead of schedule!  However, it turns out it was a ruse to remind some of the late registrants that they needed to sign up for the Highland Fling (30th June).  We were oversubscribed with 76 people attending, and if others wanted to join, then we need to make sure we had them registered in time to secure their meals.  So, make haste in getting registered to what is going to a wonderful fellowship event.

Mitch Freedman took the podium next to talk to us about the Scholarship awards and the program itself.  It is one of the most impactful programs the club runs.  We donate $20,000 to support students in their studies through grants.  This includes supporting ongoing students and providing new grants to the students.  They are all from Sammamish High School.  Many of these students find our grants indispensable in supporting them financially through their pursuit of a college education.  It is also an opportunity where the BBRC can impact its local community by allowing those without access to support succeed in their dreams.

Mitch also took the opportunity to award President Kaj with a thank you gift from the club for his service as President this past Rotary year.  Truly unexpected and very much appreciated by the outgoing President.

Jonathan Heras, our club Treasurer, was invited up by President Kaj to provide an

overview of the club’s finances across our three accounts (Club, Foundation and Endowment).  It should also be noted that Jonathan has worked diligently during his term as Treasurer to organize our finances, so we now have transparency and a single source of truth in support of the BBRC’s activities.  This was not an easy task, and with help from the modernization efforts around our digital processes (led by Ann Norman), Jonathan was able to accomplish this objective.  Furthermore, he has left our finances in a strong position, where we have surpluses of over $5,000 in both the Club and Foundation accounts and 10% growth in our Endowment fund ($445K) to help support the club’s ambitions for the next Rotary year.  Congratulations to Jonathan and his team.

Next up was the induction of two new members to the club – Sam Peterson and Kevin Polzin.  This will take our total new members for the Rotary year to 13 (a 15% growth rate and we will net out at 7 new members).  Sam and Kevin were co-sponsored by Martin Clavijo and Steve Roberts respectively.  President Kaj Pedersen inducted the two gentleman, noting that they are both interested in promoting engagement in our community through service, whether that is through civic responsibility or by setting an example to their children, it is clear their involvement is something that we will benefit from within the BBRC.  It is also good to see that we have two new skiers joining the club!

Alex Chehab joined our meeting this morning; journeying up from Portland, where she has now relocated.  We wanted to recognize Alex for her dedication and service to the New Generations committee, where she has represented them on our board for the last two years.  She has done much to promote the benefit of younger members within Rotary and in the club, which has been tremendous.  As a result, the club wanted to recognize her contributions by making her a Paul Harris Fellow, which Jeff Cashman formerly awarded to her at the meeting today – congratulations Alex and we wish you continued success in your journey.

the studio owner of Seattle Mosaic Arts.  Claire’s life has had some very tragic and hard challenges.  Claire through her medical background and with the support of her artistic mother, found a path to healing from traumatic events using tasks like building mosaics – the activity is able to focus the brain, so it can move beyond the pain to one of healing and

acceptance for those who are struggling to move beyond personal grief, PTSD or other disorders.  It was a deeply moving and personal talk this morning and our members appreciated Claire’s willingness to share it with us this morning.

President Kaj wound up the meeting by thanking his board for their support over this Rotary year and thanking the club for the privilege of serving them in the capacity of President.  At this point, Steven Goldfarb took the opportunity to thank President Kaj and this was shared by the audience.  President Kaj finished the meeting with a quote from Branch Rickey, a baseball player and sports executive: “It is not the honor that you take with you, but the heritage you leave behind.”

Instructor, mosaic artist and family physician Dr. Claire Barnett has been studying, creating and teaching mosaics for over 15 years. Claire began creating mosaics after the tragic death of her two young daughters in 2000. As her own backyard filled with memorial garden stones, Claire began expanding her studies, both in mosaic and in medicine, to incorporate the therapeutic nature of mosaics into her medical practice. In 2009 Claire opened Seattle Mosaic Arts. This community based studio features workshops from international artists, mosaic technique classes, lectures, art shows, group events, commissions, and space and support for people to create their own mosaic projects. Claire specializes in therapeutic mosaics with a focus on grief and trauma.