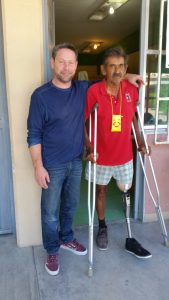 Wendi Fischer introduced BBRC’s newest member, Nancy Khoury. Nancy has been with Banner Bank in Bellevue for 7 years and received a standing ovation from our membership as the newest Rotary member in the World. Welcome Nancy!

Clint Merriman, Chair of the Vocational Service committee, introduced Kevin Klustner who did a short presentation on his role as Executive Director of the Clean Energy Institute at the University of Washington where their mission is to research and build new renewable energy systems. Other BBRC members will be doing likewise in the future!

Brian Evison shard information on a golf 4some he is putting together for Monday, September 9. Our Sergeant of Arms Kit Bowerman reiterated his policy on courtesy to our speakers and members by silencing and not using your cell phone during the meeting. We then had our weekly rendition of Happy Bucks!

Our program today was “International Prosthetic Partnerships”. Speakers were Doug Pinkley, owner of the Center for Prosthetics Orthotics, Seattle, and Brad Farrow, who started two non-profit prosthetic and orthotic programs. The first program Brad started was in Guatemala in 1993, with help from the Balandra Guatemala Rotary Club, He later met a Doctor who did work in La Paz Mexico and started the program there in 2006. Brad was introduced to the Rotary Club in La Paz and they have been extremely helpful in getting prosthetics, braces, etc. He also discussed some of their patients and how a new prosthetic could be a truly life-altering experience for them.

Doug Pinkley, along with another attendee Garth Knapp (Owner and practice manager of Sound Prosthetics and Orthotics in Olympia, WA), took over the program management of the La Paz clinic 2 years ago. Doug described the work they do for patients at the La Paz clinic. Normally Doug goes to the clinic twice a year for two weeks each time. Appointments are set up beforehand but after people find out they are there, they line up outside the clinic. During those two weeks, they will see between 100 and 150 patients. The type of help given patients includes diagnosis and solutions such as artificial limbs, braces, etc.. That means they have to determine the problem with each patient and do the necessary measurements so they can design and build the right apparatus for their need. As knowledge of their expertise has grown by word of mouth in both Baha California and the mainland, patients come from hundreds of miles away as there are very few options for those who cannot afford to pay.

After taking questions at the conclusion of the presentation, Brad and Doug were given a card stating BBRC, thanks to a donation by the Kaj Pedersen family, is providing 1000 lbs. of fresh produce to Rotary First Harvest on their behalf. Acting President Chuck Barnes than read his quote for the day from Mother Teresa – “Not all of us can do great things but we can all do small things with great hope!” The meeting was adjourned at 830 AM.

Anyone who is interested in donating to the La Paz Clinic, can do so as follows. Because the clinic is not presently a recognized 503-C charitable organization, this is the established link that will allow the donations to be written off as a charitable contribution. Send your donation to:

At this point donations should be in the form of a paper check with a note requesting that that the funds be directed to the limb restoration fund, and a request for a receipt.

All funds will go directly into purchasing of raw materials and components necessary for the construction of prosthetic devices. Doug and Garth thank you for your support!

Doug Pinkley CPO LPO is Vice President / Owner of the Center for Prosthetics Orthotics Inc in Seattle. He has been there since 2004. Doug has a BA in Psychology and BS in Prosthetics and Orthotics, both from the University of Washington. He also was a volunteer with Washington Orthotic and Prosthetic Association for 3 years to help monitor and affect change of the state’s legislative and regulation processes. Since October, 2016, he has been a volunteer and Practice Manager at a La Paz Mexico prosthetics and orthotics clinic, which will be discussed today.

Garth Knapp CPO LPO is the Founder and owner of Sound Prosthetics and Orthotics in Olympia. Sound P&O has grown steadily from a two-person clinic to now 8 employees. The clinic has developed a reputation for success with difficult to fit prosthetic needs, and unique and challenging orthotic cases

Garth attended UPS in Tacoma and received a BA in Business Communication with a minor in Psychology. He worked as an emergency medical technician (EMT) for Shepard Ambulance and soon developed an interest in medicine and rehabilitation. He became involved in prosthetics and orthotics in 1992, and went on to work in both technical and clerical positions. He later attended the University of Washington, completed the Prosthetics and Orthotics program, and continued working in the Seattle area. After a sabbatical spent traveling and acquiring his US Coast Guard and UK Captain’s licenses, he returned to the field and moved to Olympia where he volunteered with the Lacey Fire Department and worked for two years with Collier Prosthetics before starting Sound Prosthetics and Orthotics at the same location in June of 2004.
Garth has enjoyed volunteer work in both Guatemala and Mexico since 2006, at times completing multiple trips each year.

Brad Farrow is CPO Emeritus who has been a Prosthetist since 1966. He started his humanitarian efforts in Guatemala in 1993. He and his fellow volunteers along with Mobilized Mankind and the Balandra Rotary Club started the Orthotic and Prosthetic program in La Paz Mexico in 2006, subsequently providing care to prosthetic and orthotic patients throughout the Baja Peninsula. Over the years they have provided no cost prosthetic and orthotic care, making approximately 700 legs and 700 braces.