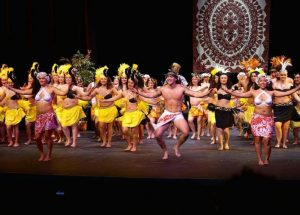 Our meeting was opened by Past-President Chuck Barnes while Margie Burnett recited her invocation land let the pledge of allegiance to our flag.  President Desiree Yuzawa introduced guest and visiting Rotarians. There was an excellent turnout of many past Presidents and long-term members including Phil Salvatori, Bob Maloney, Dick Brown and Ted Ederer. Also visiting was past member Rourke O’Brien who is now a member of the Boise Rotary Club and exchanged flags with our club!

Kit Bowerman, Sergeant of Arms, shared his pet peeve – cell phone use at meetings – rinds, scrolling etc. He reported he will fine members more interested in their cell phone then the meeting!

Our speaker today, Colin Radford, long-time member of BBRC shared “A Tahitian Love Story”, how he and his wife Manio met almost 60 years ago after he made a decision to join 3 families planning to cruise around the world. Colly had been brought along to teach their 5 teenage kids during the journey. When they reached Tahiti, he met Manio who helped her older sister act as a tour guide for their time there. They soon realized that their relationship was serious and talked with Manio’s family. Their advice was they had a year to determine whether their relationship was real. After a year, they still were deeply in love, were wed and the rest is history!

And that around the world cruise rally did not get any further than Tahiti as fuel costs had quadrupled from Hawaii to Tahiti and it was decided not to continue. But based on Colly’s choice to leave his teaching job in Massachusetts to teach 5 teenagers on a yacht, he got a tremendous reward – an almost 60 year “Tahitian Love Story”!

“Glory Days” President Chuck Barnes then presented Colin with a card thanking him for his presentation and denoting a donation of 1000 pounds of produce to Rotary First Harvest by Kaj Pedersen.

Colin "Colly" Radford will tell a story that has lasted 60 years and is still going strong! Colin is originally from the Seattle area, attended Yale University and taught for a few years prior to going into the army during the Vietnam era. But after Yale and before being drafted into the Army, he had an experience from which you could make a movie!

Radford & Company has been in business since 1921, originally started by Colin's grandfather. In 2003, Colin sold the company to his son and daughter-in-law, Manu and Malia. Radford & Co. provides asset management of commercial real estate, with an emphasis on retail properties. Over the years, the firm has acquired and pre-leased retail sites throughout King and south Snohomish counties.

Colin has been a valued member of Bellevue Breakfast Rotary since 1986!