Executive Director Chihuly Garden and Glass at the Seattle Center

Michelle DeFano, the executive director of the Dale Chihuly Garden of Glass, spoke about Dale and his many beautiful works of art located in the Garden at the Seattle Center.  David Schooler, President of Rotary FIrst Harvest came to thank the BBRC for being the largest supplier of work hours each and every year.  Ferdose Idris, BBRC’s Student of the month, is on the diversity committee at Sammamish and served on the strategic planning committee for the Bellevue School District.  Dick Brown presented to Cary & Jan Kopczynski the Major Donor Award to signify their gift of $10,000 over the years to The Rotary Foundation.  Katherine DeStephano rallied the troops for the Bellevue 10K. We have three days left with 1700 runners signed up as of today.

Dale Chihuly was born in Tacoma and, by the time he was a teenager he had lost his brother to an accident and his father to illness. His mother was very influential in his life. He graduated from UW with a degree in architecture then attended the University of Wisconsin. He received an assignment as the first American to study at the Benini School of Glass on Murano Island in Italy. On his return to the US, he founded Pilchuck Glass School which serves thousands of students each year. Dale lost his eye in 1976 in a car accident. He gave up glass blowing himself shortly later because he had lost his peripheral vision.

Dale has created amazing glass installations around the world and has now opened the Garden of Glass near the Space Needle. They have a long-term lease on city property and work with the family that runs the Space Needle. It is a public-private partnership unlike most museums.

Chihuly has collected blankets, many of which are on display at the museum. The Persian Ceiling has over 1700 pieces of blown glass hanging overhead. The chandelier room holds chandeliers that hung in one of Chihuly’s early outdoor displays in Venice.

The building that houses the museum is the old Fun Forest building which Chihuly has completely redesigned to fit his purposes for the museum. The cafe tables in the restaurant hold pieces from his personal collections – and he collects a LOT of interesting things. 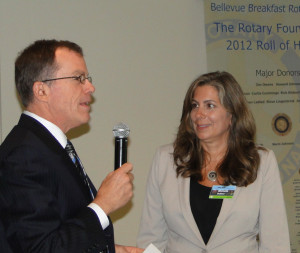 The museum store offers art work from many local artists. Currently, Trip Advisor lists the museum as number one for a visit to Seattle.

The Chihuly Garden of Glass partners with Pratt Museum, Pilchuck School, the Seattle School District (the science of glass) and Arts Fund. They raise money for all of these organizations and hope to provide a lot of funding and support over the next ten years.

Dale has a show at the Desert Botanical Garden in Phoenix in May and another outdoor display opening in Montreal later in the year. 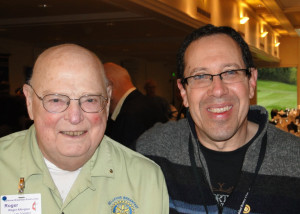 As Rotarians: Dream it! Wish it! Do it!

David Schooler, President of Rotary FIrst Harvest came to thank the BBRC for being the largest supplier of work hours each and every year. THis year RFH will place 9 million pounds of fresh produce in western Washington. Each month, RFH places nearly 1 Million servings of 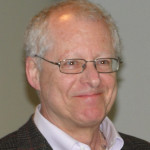 fresh produce. He made special awards to each BBRC member who gave $1000 this year to RFH. Those people included Morris Kremen, Kevin Jewell, Steve Lingenbrink, Howard Johnson, Tom Smith and others. 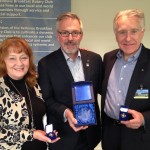 Dick Brown presented to Cary & Jan Kopczynski the Major Donor Award to signify their gift of $10,000 over the years to The Rotary Foundation.

Katherine DeStephano rallied the troops for the Bellevue 10K. We have three days left with 1700 runners signed up as of today. Online registration has ended but there will be registrations taking place at the Microsoft Store, Escape Outdoors and several other venues. Katherine asked all 10K committee members to stand and receive our thanks. Dick Brown assures us that, despite official weather forecasts, the predicted rain will not start until sometime between three and four pm so we will have a wonderful day for the race. 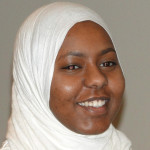 Ferdose Idris is on the diversity committee at Sammamish and served on the strategic planning committee for the Bellevue School District. She has been involved in the Running Start program at Bellevue College. She is actively involved in the Rotaract Club at Bellevue College. She is the treasurer of the club and has been involved in raising funds for malaria and polio programs as well as relief programs in war-torn Somalia. Ferdose thanked the club for our support. She hopes to go to University of Washington when she receives her degree from BC.

The BBRC Flex Club will meet Wednesday at the Bellevue Hyatt Koral Restaurant and the speaker will be Mr. Bellevue himself, Kemper Freeman.

Michel Carter will be going in for heart surgery and will be away from the club for the month of May.