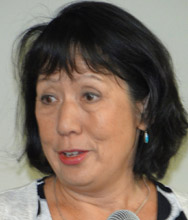 Jim Gordon introduced our speaker, Melinda Holland, the CEO and Technical director of Wildlife Computers.  Wildlife Computers, a leading innovator in electronic tagging technology for marine animal applications, was started in 1986.  Joellen Monson, reporting on the Bellevue 10K, announced that there were about 2000 participants in the race last Sunday.  Washington Business Week, represented by Steve Hyer and Steve McGraw, joined the meeting to receive a check from the club. Washington Business Week is a program that provides young people with preparation for the real world while they are in high school.

Wildlife Computers, a leading innovator in electronic tagging technology for marine animal applications, was started in 1986 and produced archival tags specifically used on seals. It started with three people working in a back bedroom of the founders’ home.

In 1999, Wildlife Computers began making tags for fish and the company expanded to ten people. Since that time, only two of the original 10 have moved on to other work. The company has been self-funded for its entire existence and they have been very successful without the help of outside funding.

The company provides conservation and mitigation of wildlife, especially fish. Tagging is important to industries like off-shore oil drilling, tourism and the military as their activities can have a huge impact on fish populations.

A new endeavor for the company is entertainment and education. They have worked with programs like National Geographic and Shark Week and this expansion has been very profitable for the company.

They have expanded to tag not only seals but otters, sharks, rays and a variety of marine life. They track animals that are endangered so that accurate plans can be made to help restore populations.

The company has recovered their tags after the tags have been floating at sea for five years and they were still able to download the data on the tag. The data on the tags is accumulated by Argos Network satellites.

They work with other organizations to help with marine protection and rehabilitation. The rehabilitated animals are tagged using Wildlife Computer’s tags. They have been able to track how well the animals do after the animal is released into the wild.

Wildlife Computers is able to track all the activities of the animals they track so they can determine energy use, feeding habits, reproduction, etc.

Their clients include government agencies, universities, non-profit organizations, consulting firms, and a variety of industries that impact wildlife. They have clients in 55 different countries.

They are tracking sharks and have learned that a shark that attacks someone will not remain in the area, and in fact, have been tracked and located 1000 miles away in less than a week. They use a lift system to get the 2000 pound great white sharks out of the ocean, tag them, then release them back to the ocean.

Their sales cycle is long and it can often take more than two years to seal a contract. They attend a lot of conferences but have yet to make a sale at a conference.

Next week is our annual Peace Meeting and President Chris encouraged members to bring guests.

The meeting opened with music but no bell as, apparently, someone has absconded with it. Keep your fingers crossed that it is returned!

Joellen Monson, reporting on the Bellevue 10K, announced that there were about 2000 participants in the race last Sunday. She had a group holding cards before the club and club members rearranged them so that the message was “Thank You” to all the club members who worked so hard to make it a success.

SAA Tim Johnstone engaged the club in creating a graphic representation of President Chris using an assortment of beans . . . . . . .

yes, beans! The judge determined that Sayoko, Rourke, Steve Vincent, Jeanie Thorsen and Bill Spencer’s table won. Everyone else had to put two dollars on the table.

Washington Business Week, represented by Steve Hyer and Steve McGraw, joined the meeting to receive a check from the club. Washington Business Week is a program that provides young people with preparation for the real world while they are in high school. It teaches how to be a team player, think strategically and understand how a business works. The are better able to assimilate into the business world and, through their mentorship, they learn leadership skills. Mentors are business leaders themselves and businesses are sending some of their top employees to serve as

mentors for the summer program. Joellen presented the two Steves with a check for $1200 to sponsor one student this summer.

Andrew Face and President Chris challenged the club to identify which individuals in a series of pairs are Rotarians, a job they were themselves pretty completely incapable of doing correctly. Here are the results as far as your humble reporter can tell:

“The non-scientific name for an animal that doesn’t flee from or fight its enemies is LUNCH”.

Melinda began her studies in molecular biology at the California Institute of Technology in Pasadena, California. She subsequently attained a degree in Data Processing and Business Systems from the University of Redlands. From 1975 to 1990, she designed and wrote a wide variety of computer systems, ranging from corporate business computing to the collection and organization of satellite data at the Jet Propulsion Laboratory in Pasadena, California. She joined Wildlife Computers in 1990.