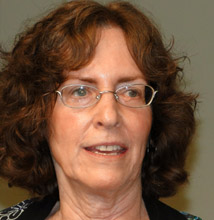 Tom Leonidas introduced our speakers:  Nancy Kaplan, Executive Director of CRU Institute, an organization dedicated to teaching mediation skills and concepts to youth and adults, and Diane Tuttle, who has worked with Nancy for 12 years and is retired from the Bellevue School District.  Tom related a moving story about the experiences of a sixth grader with bullies.  Bob Holert introduced Alexey Avodayev, our Student of the month from Sammamish High School.  Kelly Kyle from the Bellevue Overlake Rotary Club introduced the GSE Team from Russia:  Steve Lingenbrink announced that 533 people attended the District Conference in Coeur d’Alene.

Tom Leonidas introduced our speakers:  Nancy Kaplan, Executive Director of CRU Institute, an organization dedicated to teaching mediation skills and concepts to youth and adults, and Diane Tuttle, who has worked with Nancy for 12 years and is retired from the Bellevue School District.

Tom read us a story, Fatso, written by a sixth grader who had coped with bullying:

“My size always affected the way people treated me.  Through elementary school I was always getting teased and bullied.  Even the slightest things.  For example, if I would wrestle and I would win, they would just say that I’m too big, too heavy, they couldn’t get their arms around me.  I acted like it was okay and was fine with it, but it really hurt me and it made me feel self conscious.

Things began to change when I was selected to play in a competitive soccer league two years ago.  I did not expect to lose as much weight.  I was more focused on a game I have become passionate about.  During this period I began to receive comments from friends and family about how much weight I had lost.  At the same time I began to feel much stronger and was moved up three times to better teams in less than one year.

I have felt proud and accomplished and yet because of my past experiences I can relate to those people who are teased about various things including weight.  I understand how overweight people feel and I have seen situations where people are bullied because of their size.  I can empathize with them.  It makes me feel glad that I’m not in that situation anymore.  But I feel bullying causes people who are bullied to feel very insecure.  I often wonder how people would treat me if I was still overweight.   Thinking about it makes me less likely to want to be friends with bullies.

Unfortunately, only a few people did really stand up for me.  They did not exactly confront a bully or stop a bad teasing that was happening and not everyone did, but they reassured I had someone to count on and friends that told me they liked me for who I was didn’t matter what shape, size or even color they were always there for me.

Recently in the news, there have been many stories of kids being bullied to the extent of killing themselves which I found tragic.  It makes me understand how emotionally traumatic bullying can be.

Nancy Kaplan has eight children, six of who are adopted and from different cultures.   She was doing divorce mediation in the late 1970s when she founded CRU Institute and decided to do something more preventive and teach children to become mediators.  CRU Institute offers peer mediation programs in the US, Slovenia and Singapore.

Nancy feels that schools today are too focused on testing.   Her program to teach mediation to students helps them to feel better about themselves.

Teaching mediation starts with very young children and CRU Institute offers the following books for them:  Dogs and Problems, which depicts how people act out when they get angry and Birds and Words that Hurt, a story about Paul Pelican, a different bird who doesn’t have any friends.

CRU Institute’s peer mediation program actually trains 4th and 5th grade students as mediators.   They look for conflict on the playground and help to resolve it.  CRU Institute’s programs are also offered at the high school level.     At the schools where these mediation programs are offered, suspensions are way down.   They have really helped the students to understand how their behavior affects others.  Nancy told us a story about how the peer mediation program saved a student’s life at a Seattle High School; during the mediation session, the bullying student came to understand how his boorish behavior was driving the bullied student to think seriously about suicide.

CRU Institute has produced a DVD on bullying and harassment, which serves as a catalyst for soul searching.   It addresses how students fit into a high school, gay and lesbian issues and how teachers can open their door to students in pain.

Diane Tuttle, who is retired from the Bellevue School District and has worked with Nancy for 12 years, confirmed that Nancy’s program is very effective and truly helps kids to resolve disputes.  It doesn’t tell kids how to resolve a specific conflict, but gives them the tools to figure it out.

A question was asked about how social media impacts bullying and conflicts and Nancy remarked that it makes matters worse.   Bullying and rumors can follow a student everywhere, especially if it goes viral.

CRU Institute is Nancy’s passion.   Although the schools were funded two years ago to offer anti-bullying programs, there are no funds today.   Nancy needs help conducting peer mediation programs in local schools.

After Nancy’s talk, each table was asked to discuss how BBRC could potentially help.

Chris Monger called the meeting to order at 7:30am with a music eye opener, Peace Train, by Cat Stevens.

Introduction of GSE Team from Russia

Stanislav Romanenko, Group Leader is a Charter Member of the Rotary Club of Krasnodar and is a Business Trainer, Facilitator and Executive Coach.

Alexander Khlebuschev is from Rybinsk and the Owner and Director of The World of Doors, a private company.

Evgeniia Guseva is from Cherepovets and is an English Teacher at InterGlossa, a privately owned language school.

Petr Sitnik is from Perm and is a Lecturer at the National Research University Higher School of Economics.

Natalia Smoliakova is from Krasnodar and is the Owner and Director of The Wonderland Travel Agency.

Denis Kharitonov is from Ivanovo and is a Developer of Software and Virtual Games at Social Quantum, an IT company.

Bob Holert introduced Alexey Avodayev, a senior from Sammamish High School.   According to his counselor, Katherine Lamb, Alexey is always willing to go above and beyond to help others, is a leader around campus and is highly respected by his peers and staff. Alexey’s parents were born in Azerbaijan, which makes him a first generation American.   Alexey talked about working as a Junior Staff member at the Bellevue Boys and Girls Club where he helps kids with their homework.  He is grateful to the Club because it helped him gain confidence at an earlier time in his life.   His current AP classes include AP Government and AP Calculus.    Alexey has been taking Running Start classes at Bellevue College for two years.  After high school, he plans to attend Bellevue College for one more year to receive his Associates degree and then transfer to UW to get his Bachelor’s degree in Computer Science.

Steve Lingenbrink announced that 533 people attended the District Conference in Coeur d’Alene.  He complimented the four inspirational speakers and the Russian GSE Team’s interesting moves on the dance floor and thanked all from the BBRC who attended.   Steve made special note of John DeWater and Tim Leahy’s talents as Masters of Ceremony and Steve Roberts’ moving invocation.

“If we are to teach real peace in this world, and if we are to carry on a real war against war, we shall have to begin with the children.” – Mahatma Gandhi