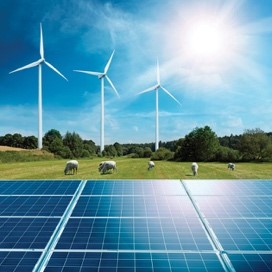 Kevin Klustner, Executive Director of the Center for Advanced Materials and Clean Energy Technologies. University of Washington (and BBRC member) spoke on clean technologies. Kevin had previously led a couple companies in the clean energy space and seems a natural for this role!

Kevin started out by sharing the breakdown of US sources of energy generation over the years. At one time, the dominant fuels used for energy generation in the US were coal and natural gas, with about 70% coming from those two sources. Today the use of coal is much less than it was in the past. Kevin also mentioned that we are very lucky in the Northwest as a large amount of our energy comes from hydroelectric, a clean and cheap source of energy (our electric rates are significantly cheaper than other parts of the country). Right now, the breakdown of sources of fuel for electricity generation are oil 37%, natural gas 29%, coal 14%, nuclear 9% and clean (hydro, wind, solar 11%.

Clean technologies that are renewable sources of energy include solar, wind and hydro. The difficulty is storage to even out the energy flow. That is why there is a great deal of R & D on batteries. The problem at this point is they are not reliable, with problems reported of batteries catching on fire, exploding etc.

Prices for wind and solar continue to decline and smart grids and smart devices help optimize consumption. One big problem still is the US electric grid is very fragmented, as each power company is its own island. That makes it difficult to optimize the national grid. However, we are presently able to grow the economy without increasing our energy consumption because of greater efficiencies.

In some parts of the country, the trend for businesses or clusters of businesses is to generate their own energy. However, a difficulty for research and development making progress in clean technologies is the lack of venture capital available. Because of the long-term nature and uncertainty of the research & development success, venture capitalists have little interest in providing money to the industry.

Kevin then discussed an Innovation District the University of Washington is planning to develop in an area adjacent to the southwest corner of their property (south of 15th Ave NE). The UW owns the land and developers will provide financing and develop mixed use properties, to be leased to both the UW as well as other tenants from the private sector. This is a new concept here but had been used in other parts of the country. The UW feels this mixed-use formula has great potential and does not require money from the UW or taxpayers. The first building being built her is the Center for Advanced Materials and Clean Energy Technologies, of which Kevin is Executive Director.

Kevin answered a lot of questions at the end of his presentation and it was apparent the audience was very interested in this subject!

Earlier in the meeting, Jeff Cashman discussed November as Rotary Foundation Month and all the tremendous things our donations do around the world! Do not forget to donate this month to the RI Foundation!

Kevin has spent his entire career in the technology sector. He began his career with Hewlett Packard and moved to the Northwest to work for WRQ, a privately held corporate networking company where he rose to become the Chief Operating Officer and member of the Board of Directors. For the past 10 years, Kevin has been deeply involved in the clean tech and sustainability sector, building two startup companies that focused on energy efficiency technologies. Kevin is a member of the Keystone Energy Policy Center and an advisory board member of the UW’s Clean Energy Test Beds. Kevin has a BA and an MS from Stanford. He is married and is proud of his two sons who have recently come off the family payroll.