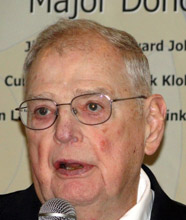 Our own Roger Allington introduced us to the complexities of the Alaska Native Claims settlement Act and how it affects the fortunes of Alaska Natives, the Federal Government, and the Oil Companies.  Madeline Gauthier again reminded us of the need for volunteers at the BBRC Adoption party on October 20th.  Bob Holert introduced our student of the month,  Ella Kuzmenko, from Sammamish High.  Geoff Bradley, from the Bellevue Environmental Department, discussed a work party associated with trail restoration and planting at Mercer Slough from 9-1 on October 27th

Today’s program was presented by Roger Allington, and related to the Alaska Native Claims Settlement Act. The U.S. acquired Alaska, (portions from Russia, and other portions were a territory at that time) in 1867. For over 100 years, there have been disputes as to the claims. President Nixon signed the Alaska Native Settlement Act in 1972, which partially defined “Native Corporations”. While these native corporations relate to shareholders as with traditional corporations, there are considerable differences in that they also relate to Native Alaskans. You do not have to be in Alaska to do business with Alaska Native Corporations.

Alaska is huge, consisting of 365 million acres. Of that land mass, 106 million acres are applied to the State, and 44 million to Native Corporations – ANCSA . I million acres transferred from the Fed to private before Statehood. 214 million acres are in Federal ownership, which is 59% of the land of Alaska. The Alaskan Statehood Act was signed by President Eisenhower, and the territory became a State in January 1959.

In each of the previous enactments, purchase treaty, territorial act, and statehood act, the Native claims against the government for taking their lands were recognized but not resolved. The claims were kicked down the road for a future time. In 1869, two years after Seward’s purchase, the Southeast Alaska Natives filed a claim against the Federal Government, but nothing came of it. In 1935, the Tlingit and Haida Natives filed suit in Federal Court seeking compensation for taking lands in southeast Alaska. Thirty years later in 1965, the claim was recognized and these Natives were compensated in the amount of $35 million dollars. The Central Counsel was established, and is a non-profit entity that serves as a quasi-tribal entity for Tlingits and Haidas. That settlement stirred other Natives of Alaska to begin action in Congress to redress Native Land claims.

In 1966, the Morris Udall land freeze stopped all transfer of Federal lands in Alaska until certain issues were resolved, including the Native claims and the oil pipeline. Before the freeze, the state had explored the North Slope for oil and selected lands that appeared to be likely oil fields. In September 1969, oil leases were put our for bids and the State received in excess of $900 million for those leases. The State would also receive oil royalties when the oil started to flow, but the oil could not flow until the freeze was lifted. The State and oil companies put pressure on the Congress to enact the Alaska Native Claims settlement Act (ANCSA) Without the freeze and ensuing events, ANCSA would probably not have been enacted.

The basic ANCSA provisions were that Natives retain ownership to 44 million acres of land. Natives were compensated with 962.5 million dollars for title to the remainder of Alaska. This abolished all reservations and trust lands, and requires federal agencies to reduce land holdings to minimum necessary. ANCSA required each Native region to form a corporation and be the conduit for delivering shares and monetary compensation to the shareholders. ANCSA also provided for Natives enrolled in a village to form similar corporations to receive funds dispersed. The regional corporations are for-profit corporations. The land base is alienable (transferable). Mineral and timber profits must be shared. There are mandatory payments to shareholders in first few years. Such payment was challenging since the Natives typically relied on cash payments and they had no credit cards. As such, Native Alaskans would often take considerable sums of money to their homes, for example.

Native Corporations are not tribal entities. However, there are some similarities. ANCSA also provided for Natives enrolled in a village to form similar corporations to receive funds disbursed from the regional corporations. ANCSA information can be obtained at hppt://openancsa.community.uaf.edu . The University of Alaska at Fairbanks is an excellent source of information about the period from 1971, when ANCSA was signed, to the present. In general, Native corporations had nothing to do with traditional business, so they had to look for some purpose. Corporations are usually formed for providing capital for a known business enterprise, making widgets, etc. Native corporations for some time were trying to figure out what they were about.

The Native Corporations have some unique characteristics.  There are politics involved. The extended size of the family matters. The shares of business are evenly divided. The Board of Elections are more like a political convention. The Boards have to be sensitive to the shareholders. Because the shares are evenly divided, no person or entity has a major share. Board elections are more political than normal in business.

For example, at Sealaska, the executives would mull over a political action. In order to gain an insight as to how the share owners would react to that action, Roger would talk to some Native leader explaining the corporate action knowing that person would talk to their circle of friends. If some shareholder demanded an immediate response or was unpopular, the President would just say Allington was not authorized to make the statement, and the proposed action would be dropped.

Eventually, the Native Corporations did find purposes. For example, they would deal with Corporations looking for business opportunities. The Native corporations would deal with timber, sand and gravel, or other natural resources from their land. The could provide plastics, construction, or other services. There was often difficulty making certain of what they could do. Native corporations are akin to political situations, and leadership is wary about risky endeavors.

Bill Prater introduced our guests.  The Invocation was presented by Joellen Monson:

May the sun bring you new energy by day,

May the moon softly restore you by night,

May the rain wash away your worries,

May the breeze blow new strength into your being,

May you walk through the world and know

Its beauty all the days of your life.

Madeline Gauthier described the needs for participants with the BBRC Adoption party on October 20th. There are 40 children registered which might even increase to 50, and we still need more drivers. Potential parents are attending from out of state, and this is an opportunity to participate in what BBRC is really about. We need volunteers for face painting, games, foosball, etc. Buying gifts for children is huge, for ages 10-17. We particularly need drivers, which will require a police check.

Bob Holert introduced our student of the mont,  Ella Kuzmenko, from Sammamish High: Ella has a calm and peaceful disposition, and is able to maintain a GPA slightly under 3.9. Ella chaired Operation Smile, which raised money for club foot and cleft palette donations. She is interested in politics, and particularly debating. She finds debating particularly interesting since this allows finding the truth or falsity of different arguments. On this topic, Ella is publishing a book in this area, Non-Sequitor, which is coming out this week.

Geoff Bradley, as introduced by Cary Kopczynski, discussed a work party at Mercer Slough from 9-1 on October 27th. This work party is associated with trail restoration and planting. Mercer Slough is a 320 acre park that includes extensive hiking and biking trails, wetlands, forests, streams, etc. They are looking for those interested in a Volunteer program, which is led by a naturalist. Participants should obviously wear suitable clothing and expect to get wet and have fun. You can sign up at the BBRC meeting or site. The purpose of Saturday’s project is to help on a boardwalk project, a stream restoration, and/ or a planting project.

President Chris Monger described the BBRC Annual Breakfast to be held November 2nd. Invite your spouse or significant other.

Some suggestions were that request for a project to get approval through Rotary. We could assist with the Malaria Initiative that has so much support from such sources as the Bill and Melinda Gates Foundation. Alternatively, BBRC should consider how to serve former members, and get them active again.

Please show up if you:

• Want to have some Wednesday night fun

• Want to talk to newer and prospective members about Rotary

• Desire to help plan the growth of this club

The premise is to get people who can’t make a regular weekly meeting active in Rotary. Hope to see you there.

Roger is a member of BBRC and his career has included Statewide Planning Director and Chief Engineer for the Alaska Department of Transportation and Public Faciliites. He has served on the Assembly and Planning Commission for the City and Borough of Juneau and served as Co-Chair of the Alaska Coastal Policy Council and on the Alaska Municipal League.