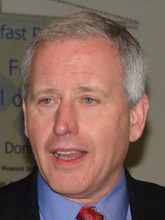 Jeff Cashman introduced Robert Malte, Chief Executive Officer of EvergreenHealth in Kirkland, Washington since April, 2010. He is responsible for the leadership of all aspects of EvergreenHealth’s purpose, mission and vision.  Mr. Malte introduced his presentation by saying his goal was to “demystify” healthcare.  Maudeline Gauthier and Girish Bhatia still need more assistance with our October 20th Adoption party.  Justin Van Gortler was inducted as our newest BBRC Rotarian.

EvergreenHealth in Kirkland, Washington since April, 2010. He is responsible for the leadership of all aspects of EvergreenHealth’s purpose, mission and vision.

Bob has a strong commitment to community service, serving on the Washington State Hospital Association Board, the First Choice Health Board, the Greater Kirkland Chamber of Commerce Board, Redmond Rotary and the President’s Advisory Council at Lake Washington Institute of Technology. In Colorado, he served on the Colorado Hospital Association Board and the YMCA of Denver Metro Board, as well as a number of other organizations.

Malte earned his Master of Business Administration at The University of Chicago Graduate School of Business in 1982 and a bachelor degree in economics at Ripon College in Wisconsin in 1976. A Chicago native, Bob is married and has two children, ages 16 and 15. The Seattle area suits their family passions, including skiing and long distance cycling.

Mr. Malte introduced his presentation by saying his goal was to “demystify” healthcare. He noted that there are challenges in healthcare today and there are many problems to solve. 16% of the population of the US does not have healthcare coverage which translates to one million Washingtonians who are uninsured.

For employers, healthcare has become tremendously expensive. It consumes larger percentages of the gross domestic product and crowds out spending on education, the military and other priorities. The average amount an employer pays per employee is approximately $15,000 per year. The Medicare Trust Fund will go bankrupt in 2024 if nothing is done.

Healthcare reform is working on only 11% of the problem.

The Affordable Care Act, which was challenged this year but upheld by SCOTUS, has caused a shift in how things are being done in healthcare. It required many new mandates for insurers, hospitals and healthcare providers. It created a new entity called “exchanges” that creates opportunities for small employers to pool their employees so that they can offer healthcare at a reasonable rate. It also created an expansion of Medicaid. This was the one piece of the bill that was not upheld by SCOTUS and leaves decisions about Medicaid to the states. Finally, the ACA mandated a tsunami of changes for Medicare.

Every “episode of care” results in numerous bills (doctor, hospital, radiologist, pharmacy, etc.) that the patient has to deal with. Providers are trying to provide bundled payments to simplify things for the patient.

The 89% of healthcare that reform has not addressed includes societal issues that are very thorny and contentious in the countries in which they’ve been implemented. 80% of healthcare issues faced by patients occur in the last two years of life. In the future, we will see many more providers investing in palliative (or hospice) care to deal with those last few years in a more cost-effective manner.

Evergreen strives to be a model for how healthcare should be provided. One of the ways they do that is to integrate healthcare in a way that produces superior healthcare at a lower rate. Readmission penalties will force hospitals to focus on minimizing their readmission rates.

Evergreen has applied the Toyota system to drive waste out of the healthcare system.

The final issue, and perhaps the most difficult, is helping to change personal decisions about health that include healthy eating, exercise, preventive care, etc. The question is how to drive accountability.

There are not enough primary care physicians today to provide care for people who are being added to the insured rolls. This is going to be a huge problem in the future and it isn’t being adequately addressed by the decision makers nationally.

Evergreen is partnering with Virginia Mason as opposed to engaging in a merger like Swedish and Providence have done. Consolidation will continue to happen to provide economies of scale. The cost of an MRI in the US is between $2000 and $3000 whereas in Japan an MRI costs $200. The reason for that is a cultural acceptance of price controls.

The 15 person committee that will be appointed under the ACA is, in theory, empowered to influence policy. Supposedly there will be a system of checks and balances to ensure that the committee focuses on implementing best practices, rather than acting as the final arbiter on life and death decisions.

President Chris opened the meeting with his usual rock song intro.  The song for the day was “The Beat Goes On”.

Alex promoted our Preserve Planet Earth club project on October 27 at the Mercer Slough. It will run from 9:00 – 1:00 PM and Alex promises that we will not have to spread 30 yards of bark like we did last year.

October 20 will mark our 5th annual adoption party and we still need drivers. Drivers must go through a security check. Please

contact Girish Bhatia if you can drive and Madeline Gauthier if you can help in other capacities at the party. There are 25 kids signed up so far and we anticipate 40 kids on the day of the event.

President Chris provided a great Rotary induction for Justin Van Gortler who is co-sponsored by Fred Barkman and Rourke O’Brien. Justin is a Bellevue native who went to Overlake High School and the University of Washington. He is at Morgan Stanley Smith Barney. Justin is married with two sons. He is a tennis player and a past member (club president) of the Redmond Rousers Rotary Club. When it came time to “pin” Justin, the pin was AWOL but Club Administrator, Kim Drieblatt saved the day and provided an official pin for Justin.

grandson was born Thursday. The bad news is that Wendi Fisher filled in for him. She focused on the vocational aspect of Rotary through a complicated game of guess-work involving current and past vocations of several members.

Anniversary Breakfast is scheduled for November 2 and President Chris asked that we all contribute any BBRC memorabilia we have at home for that meeting for the club’s entertainment.

With 35 years of management experience ranging from community primary care to academic medicine, Malte was most recently President and Chief Executive Officer at Exempla Lutheran Medical Center in Denver, Colorado from 2003?2010. Before joining Exempla’s senior leadership team, he was part of the leadership of nationally recognized ThedaCare in Appleton, Wisconsin from 1992?2003. He was Senior Vice President of the ThedaCare Hospital Division, and before that Chief Operating Officer of its Touchpoint Healthplan.