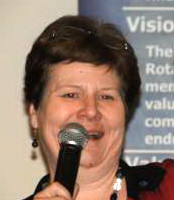 • The TELOS Program, which offers fascinating courses of interest to retirees

Janis is particularly proud of the Occupational & Life Skills (OLS) program, which helps students with cognitive disabilities. There are 50,467 people in King County with cognitive disabilities and only 12,849 of them are employed. The OLS program is turning these people into productive members of society. One of them remarked, “Before this program, I never had friend.” It takes them four years to attain an AA degree and at $425 per credit, the program is expensive. Janis is planning to build a scholarship program for OLS. She’s also thinking about offering it to other colleges using a franchise model.

For those Rotarians who are thinking about teaching at Bellevue College, Janis encouraged them to complete the Course Proposal form which can be found at http://www.bellevuecollege.edu/ce/teaching-for-bellevue-college-continuing-education/

Scott Sadler called the meeting to order at 7:30am.

O God, when I have food,

help me to remember the hungry;

When I have work,

help me to remember the jobless;

When I have a home,

help me to remember those who have no home at all;

When I am without pain,

help me to remember those who suffer,

help me to destroy my complacency;

and be concerned enough to help;

By word and deed,

those who cry out for what we take for granted.

Ann Norman gave a presentation on Rotary Youth Exchange. Rotary International has run the Youth Exchange program since 1929 and sponsors about 9,000 students on exchange to foreign countries every year.

This year, District 5030 is sponsoring students from Germany, Taiwan, El Salvador, Thailand, Sweden, France and Ecuador. The BBRC is sponsoring the young man from Germany, who is currently staying with Rourke O’Brien and Sayoko Kuwahara who treat him like one of their sons. In addition to inbound students, District 5030 also sponsors outbound students. Last summer, Danielle Kremen spent a month in Spain and then her host sister came here for a month.

When students go on an exchange, they cultivate friendships for the rest of their lives. More importantly, they become aware of the inner concerns, hopes and dreams of a family, a neighborhood, a city, a nation and a global community. Exposure to new cultures and customs is a powerful way to promote global understanding and peace.

A teenager like our exchange student from Germany needs to have a lot of confidence and show a lot of initiative to be selected for the exchange program. Most of the cost to participate in the program is paid by his parents (around $5,000). The host families provide housing and food and the Rotary Foundation provides some spending money since he is not allowed to work in the U.S.

Opening to the tune of All I Want for Christmas is My Two Front Teeth, Colleen Turner appealed to the Club to choose a tag or two off of our Giving Tree. Tis the season to be as generous as we can be. The agencies represented include KITH, the Seattle Y, Hopelink and Childhaven. Gifts should be returned to Glendale no later than December 13; they should be unwrapped with the tag attached.

Reminiscing about the BBRC

Members of the BBRC. He then asked Doug to tell the Club about how the BBRC was founded. In 1985, Norris Bevan from the Bellevue Noon Club convinced 14 people who didn’t know each other to think about joining Rotary. These 14 people, including Doug, John, Dick and Jim, got together to discuss the idea and decided they wanted to form a new Club. When they told Norris about their intentions, he thought it was a great idea but told them they needed 25 people in order to form a new Club. It didn’t take these 14 guys long to recruit an additional 11 and they were off and running with the Bellevue Noon Club as sponsor.

Lou Webb was the only BBRC Charter Member who had any Rotary experience so he was elected President and served for two years. Everybody served on numerous committees. Like today, the BBRC was a high-energy Rotary Club with a lot of projects brewing to raise money. One of the early projects involved selling poinsettias all over town. For the next money-raising endeavor, the Club members sold 30-lb. cases of strawberries. Then somebody had the bright idea to crush strawberries and add ice and soda to make a cooler. The strawberry crushing was done at Overlake Hospital, which donated body bags to hold the cooler concoction. Body bags – did I get that right? When the Health Dept. complained, the cooler concoction was moved to gas cans. Mmmm….the early BBRC members certainly didn’t lack originality.

Doug also talked about the Ugly Tie Contest, which got more outlandish as the years went by. Doug concluded by saying how much he appreciates the enduring playfulness of the BBRC.

It was amusing to listen to the two panels trying to guess the answers to Paul’s four questions about what happened in 1985:

1. What were the top five songs per Billboard Magazine in 1985?

We were then all served little cupcakes to celebrate BBRC’s anniversary.

“Thanksgiving dinners take 18 hours to prepare. They are consumed in 12 minutes. Half-times take 12 minutes. This is not a coincidence.” Erma Bombeck

Janis leads the Bellevue College’s continuing education division, which provides market-driven programs, certificates, and corporate engagements that deliver professional training and lifelong learning for the Eastside community. Before joining Bellevue College Continuing Education as its dean in 2012, Janis Machala was managing partner at Paladin Partners, a venture and start-up accelerator firm working with emerging growth companies in the Pacific Northwest. Before that Janis was president and CEO of Pinnacle Publishing, Inc. Janis has held senior management positions in marketing and business development with Microsoft, Sun Microsystems, and Wang Laboratories. Janis began her career in the college publishing industry at Wm. C. Brown and Addison-Wesley, where she oversaw marketing for their college division.

In 2005, Janis was appointed to the board of trustees at Lake Washington Institute of Technology (LWIT), where she developed a strong dedication to the mission and outcomes of the community college system and decided to become more involved in transforming lives through advanced education and mentorship. She was a trustee of LWIT for 6 ½ years.

Janis co-founded Seraph Capital Forum, the first women’s angel investing organization in the United States, and FWE Seattle, which focused on supporting women entrepreneurs. Janis has served on the Board of the Northwest Entrepreneur Network, the Washington Technology Industry Association, Junior Achievement of King County, and the advisory Board for the Entrepreneurship Center at Seattle University.

Janis received her MBA in marketing from the University of Iowa and a BA in English and psychology from Augustana College in Illinois.