Director of Rowing and Women’s Crew Coach University of Washington 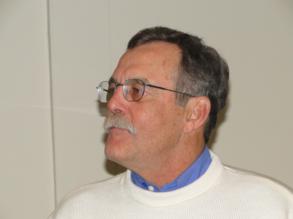 This week’s speaker was Robert Ernst, Director of Rowing and Women’s Crew Coach at the University of Washington. Now in his 40th year at Washington, the long-time crew coach and rowing director has served as the face of the Husky crew program for decades. Along the way, Ernst has guided teams to eight National Championships, one Olympic gold medal and numerous wins both domestically and abroad. Ernst has also developed and guided hundreds of rowers to the elite levels of their sport. His Husky teams have competed around the globe, racing in exotic locales such as Egypt, New Zealand, Russia and England.

Club Business included reports on the Rotary International, Student of the Month, RI Presentation on a Water Project in Kenya, and Classification Talk by Tayna Franzen.

Robert Ernst arrived in Seattle in the fall of 1974 after a short coaching stint as his alma mater. The UCI crew had nearly upset the heavily favored Huskies the year before, and current men’s coach Dick Erickson wasted little time offering Ernst a job as the UW freshman coach. It was a position Ernst maintained until the spring of 1980 when he took over as the women’s head coach. From this point Ernst cemented his legacy as one of the best coaches in the sport of rowing. His women’s teams won six National Championships, the last in 1987 when the Huskies swept the varsity eight, junior varsity eight and varsity four races. Meanwhile, his sterling moment came in 1984, when Ernest directed the USA women’s eight-oared boat to a gold medal at the Los Angeles Olympics. His Olympic accolades, though, extend beyond the water. Following the 1987 season, Ernst took over the Husky men’s program from legendary coach Dick Erickson. His resume lists two National Championships (1997 & 2007), along with numerous Pac-10 championships, San Diego Crew Classic championships and dominant performances in the Windermere Cup. In 1997, Ernst led the Huskies to a sweep of the International Rowing Association championships, winning the V8, 2V8 and freshmen eight races. It was the first time since 1950 that the Huskies had garnered such a collection of medals.

In 20 years as the Husky men’s coach, Ernst won Pac-10 Coach of the Year honors 11 times. He was also a finalist for the Seattle Post-Intelligencer’s Sports Star of the year award in 1982. Ernst stepped down from the men’s program following his win at the 2007 IRAs, handing the program over to his protégé, Michael Callahan. Ernst re assumed direction of the women’s program, a move that paid immediate dividends with a win at San Diego and later a second-place finish at NCAA Championships. As a coach at Washington, Ernst has helped further the program’s legacy.

His connections in the rowing world have allowed the Huskies to compete against the best at their annual Windermere Cup, held each spring on the Montlake Cut. A big part of the culture Ernst has established at UW has focused on development. His rowers leave Conibear Shellhouse having exceeded their potential, both on the water and in the classroom. A focus on small-boat training (Pair Training) in the preseason sharpens technique and hones speed, similar to what national programs focus on during selection. Of course, it always helps that a temperate Seattle climate makes rowing year-round possible.

In the midst of recruitment and the fall signing period, Ernst shared stories and strategies of the selection process, training strategies including pair training, race rehearsals and honing on basic skills with “Repeat, Repeat, Repeat, Matching, Going Straight and Power”.

President Scott Sadler opened the meeting with Lennie Lutes offering the invocation and pledge, and introductions of visiting Rotarians and Guests by Francine Weaver.

AP Literature/Composition. He is also active in the community with Totem Reach, tutoring students at Sammamish HS in English and Computers. He has been honored as AP Scholar with Honors and received the “Great Idea Award” from the Bill and Melinda Gates Fo

the National Honor Society and DECA as well. His goals for the future include studying business in college to expand his knowledge and find ways to help other people.

Curtis Cummings presented information on the RI Water Project in Kenya where a group of Rotarians installed a rainwater catch system for clean drinking water at a Kenya school. The water supplied enough water for all students for one week. The group also provided the students with 250 pairs of new shoes and, during last year’s trip, furnished the students with new uniforms (..in SeaHawk colors). Next year’s project will involve a sanitation system for SOTA and additional building needs for the community.

A Classification Talk was given by Tanya Franzen, sharing pictures and stories of her childhood, travel, adventures, family and work. With a love for sports and adventure, she enjoys skiing, river rafting, scuba diving and even sky diving! Tanya graduated from University of Redlands in International Relations and studied abroad in Japan for one year. After moving to the Seattle area, Tanya worked at Weyerhaeuser, Ocean Beauty Seafoods doing International Sales, SeaBear

Smokehouse as Director of National Wholesales, and currently with Windermere Real Estate focusing on view residential properties in the Eastside market. Tanya is married, to husband Mike, and has three children; Kendra ( 22 ), Jordyn (11), and Kyle (7).

Tim Leahy reminded the BBRC group that next week is the 25th Anniversary celebration! Don’t miss it!

Success is not final, failure is not fatal: it is the courage to continue that counts. — Winston Churchill

There are few coaches in collegiate athletics whose accomplishments mirror those of Bob Ernst's. Now in his 40th year at Washington, the long-time crew coach and rowing director has served as the face of the Husky crew program for decades. Along the way, Ernst has guided teams to eight National Championships, one Olympic gold medal and numerous wins both domestically and abroad. Ernst has also developed & guided hundreds of rowers to the elite levels of their sport. His Husky teams have competed around the globe, racing in exotic locales such as Egypt, New Zealand, Russia and England.

Ernst graduated from UC Irvine in 1967 and later earned a master's degree in sports administration from the University of Washington in 1979. He was inducted into Irvine's athletic hall of fame in 1984 and the national rowing Hall of Fame in 1994. Ernst resides in Edmonds, Wash. with his wife and his two children.