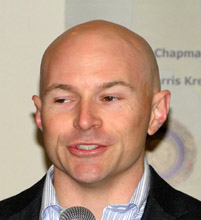 Jim Gordon, introduced Gavin Woody, Pres. of Mountaineers, who’s background included a sister who was a Rotary exchange student, graduating from West Point, with a mechanical engineering degree, a MBA from Stanford, tours in the Army and the private sector. He became heavily involved with the Mountaineers when he was talked into being the Treasurer for the Mountaineers. and later became President.  Bob Holert introduced the Student of the Month from Sammamish High School, Hawa Sanoh.  Megan Sweeters – a former member- returned and gave an updated 2nd visual classification.  Past Pres. Jeff Cashman, as BBRC RI Foundation Director, called up all BBRC RI Foundation committee member to participate with Past Pres.Jenny Andrews in conducting a Raffle for BBRC members who by the meeting date had contributed to Rotary International Foundation.

Jim Gordon, introduced Gavin Woody, Pres. of Mountaineers, who’s background included a sister who was a Rotary exchange student, graduating from West Point, with a mechanical engineering degree, an MBA from Stanford, tours in the Army and the private sector. He became heavily involved with the Mountaineers when he was talked into being the Treasurer for the Mountaineers. and later became President. From the early 1900’s until recently Mountaineers was known mostly for outdoor activity and exploration with its most prominent member Jim Whitaker of Mt Everest fame as the public persona. It now has 10,000 members, 3,000 organized activities a year with seven (7) branches from Olympia to Bellingham, lodges at Snoqualmie Pass, Stevens Pass and Mt Baker. Its mission is to enrich our community by exploration, learning and conservation. The vision is to be the foremost successful outdoor organization and by 2017 be known as a pillar of the Puget Sound community.

In the last five+ years the Mountaineers have undergone an extensive internal review aimed at structural changes to bring it into contemporary times and to appeal to a younger more diverse population. The six(6) keys to its re-invention were to invest in professional staff, identify skill sets needed on the Board to have effective strategic decision making, make a financial turn around, in part by becoming a 501(c)(3) non profit, update technology transformation, and expand youth programs. It is still a volunteer organization but now has high quality professional staff for day to day operations. The organization is lead by volunteer officers, a 22 person board, with a mix of specific skills, and a 50 person advisory council. It’s $6 million dollars of annual revenue is primarily raised with half coming from sale of publications and half from programs. 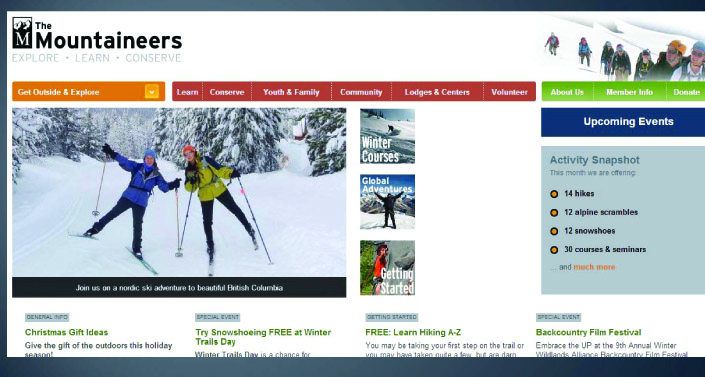 Mr Woody is an outgoing and accomplished public speaker, who provided an excellent overview of the Mountaineers, their accomplishments over the last century and the significant recent changes that have been successfully implemented.

BBRC members had several questions and gave Mr Woody enthusiastic applause when President Scott rose, handed a BBRC card to him, and announced BBRC would donate 1000 pounds of fresh produce to feed the hungry in his name to thank him for his presentation.  Jim Carney, The Aistear Group, and Morgan Stanley were the proud BBRC sponsors who made this donation possible.

After the meeting the Mr Woody stayed and engaged in discussions with several BBRC members. 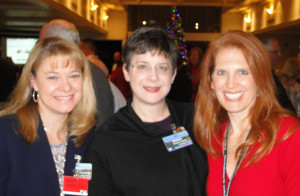 President Scott opened the meeting and introduced VP and Pres. Elect Wendi Fischer, who lead BBRC with an invocation and pledge of allegiance. Desiree Yuzawa then lead introductions of visiting Rotarians and Guests and Michel Carter expertly operated the audio and visual effects.

Bob Holert introduced the Student of the Month from Sammamish High School, Hawa Sanoh. Her goal is to become a Doctor. She came to Sammamish as a beginning English learner, worked very hard and did well in classes. She is now a senior and succeeding at a high level. She is in the 3rd year of learning her 3rd language Spanish and taking advanced Calculus, American

Government, Senior English and Health Services class. She participated in a selective leadership summer program called Summer Search. Hawa volunteered with Social Venture Kids, a youth grant making program which provides its members with philanthropy and leadership experiences to help students become engaged and leaders in their community. She will enroll in Bellevue College next and then transfer University of Washington to purse her medical studies. Those who attended with Hawa were Sammamish National Board Certified Counselor Jean Vrbka and her mother, who is not yet proficient in English.

Megan Sweeters – a former member- returned and gave an updated 2nd visual classification talk with great pictures of her home town of Walla Walla and growing up with 6 sisters.  After graduating from the University of Washington, Megan entered her banking career, starting as a teller and working her way up through several different banks throughout the Puget Sound Area to the position of Team Leader of private banking at Columbia Bank in Bellevue.  Megan lives in Redmond with her husband Mark and her daughter, Caleigh, a sophomore at Redmond High School.  Megan’s oldest daughter, Kyla, lives in Everett with her husband Gabe and two daughters of their own.

(Every Rotarian Every Year) program. They raffled off Wine and other prizes to members who were present at the meeting, BBRC members on the committee were not eligible. Past Pres. Kim Shrader, acted as scribe, keeping track of the names after Jenny and Jeff announced each pick. Each member of the committee pulled a name from the bowl, during several rounds. Chuck was disqualified because, to the time of disqualification, had only picked the names of members who were not present. The winners were Tom Leonidas, Paul Osborn, Alan Forney, Brad Bauman, Kit Bowerman, Wendi Fisher, Tim Morarity, Dean Pollock, Tom Miller and John Dewater who collected their prizes to loud cheers and general boisterous antics.

Pres. Scott inducted new member Ben Mathews who was sponsored by Scott and Rourke O’Brien. He was welcomed into the club and introduced as the newest Rotarian in the world to a standing

avalanche of applause. Ben is an Associate Client Manager with Cornerstone Advisors, Inc. in Bellevue. His proposed classification is Wealth Planning.

Ben lives in Bothell with his wife, Julie, and two young children. His community involvement the past few years has included coaching baseball and soccer at the Snohomish YMCA as well as volunteering at Financial Planning Days of King County. He has also served as a volunteer/advocate for SkiDUCK, a nonprofit organization providing disadvantaged and underprivileged children with an opportunity to ski or snowboard. Ben is a member of the Puget Sound Chapter of the Financial Planning Association.

and mountaineering. Ben stated his reasons for joining the BBRC “I have searched over the past year for a group that is passionate about community involvement but also is dynamic enough to allow for new ideas to serving the community. I am also looking for a group that allows for family involvement. It is important to both my wife and myself to have our kids involved in how we connect with our community. Having friends that were Rotarians in Reno Nevada allowed me to see firsthand how Rotary has allowed their families to become more connected in the community through service. I like that Rotary stands for service first, and from what I have observed with the Bellevue Breakfast Rotary Club there is a strong sense of engagement in what members are most passionate about. It also doesn’t hurt that the BBRC is a fun group of people that I think my family would get along with quite well.”

Pres. Scott then called up new member Fred Janssen who has completed all requirements to shed his Red Badge and was awarded his Blue Badge, receiving loud and boisterous applause.

Pres. Scott announced an opportunity for RI to win United Airline’s 10 Million Charity miles competition for humanitarian projects. It runs from Dec 1 to 31.Go to www.10millioncharitymiles.com to donate your frequent filer miles

Katherine DeSephano, for the Fellowship Committee, placed flyers on the tables and then pitched an outline of BBRC holiday season family events starting Dec 15th 4pm with ices skating at Bellevue Ice Arena, in downtown park, 5:30pm warm up and appetizers at the Westin, followed at 6:45-7:20pm with a tour down Snowflake Lane on Bellevue Way. The Christmas breakfast party will be a regular meeting on Dec.20th, without the Santa Clause program. There will be no meetings between Dec 21 and the anniversary party at Paul and Shannon Chapman’s home on January ,2014.

Tom Helbling pitched the Dec 24th AM Golfing with the Elves at Mt Si Golf Course. Its a”fun event” (ever try golfing on frozen ground?..I makes for all kinds of surprises !!) Tom emphasized its new moniker in honor of long time member and Past Pres.Norm Johnson…The Norm Johnson Memorial Golfing with The Elves Tournament, tee times start at 9AM. Sign up ASAP with Tom at tjhelbling@comcast.net

After climbing Mt. Rainier with a guide service in 2008, Gavin and his wife joined The Mountaineers to learn how to be independent climbers and explorers of the Northwest. The tremendous support provided by countless volunteers inspired him to want to help the organization thrive and become an even stronger part of our community. He remains thrilled to work with such a dedicated group during this time which, he believes, will prove to be one of the most important periods in the history of The Mountaineers.

An Intermediate Climbing Course student, Gavin has been taking full advantage of all the opportunities to find adventures on the snow, rock and ice on nearby peaks. He also enjoys skiing, triathlons and long-distance running. Gavin was elected to the Board of the Mountaineers as Treasurer in early 2010 and President in 2011.

Prior to joining A Place For Mom, where he is currently the Vice President of Operations, Gavin was an executive at Expedia and a management consultant with McKinsey & Company. He is a former U.S. Army infantry captain and decorated combat veteran (Operation Iraqi Freedom). He holds a mechanical engineering degree, with honors, from the United States Military Academy at West Point and an MBA from the Stanford Graduate School of Business.