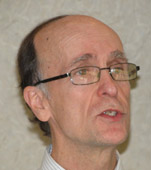 Steve Showalter told us about the challenges his son faced at birth and how they found Kindering and received the help they needed to raise him to a normal teenager ready to face life.  Traci Tenhulzen shared her life and work with us.  Jama Jama is our student of the month from Sammamish high school.  Rotaract present their program to raise money for uniforms for Peruvian school children.

Steve is a physicist, and he brought us a very compelling story of his son’s experiences with Kindering.

In November 1993, Steve and his wife had a 22-month-old daughter, and she was pregnant. Her water broke, and several days later, their son was born prematurely (24 weeks). He weighed one pound, 12 ounces. He was born with extreme physical challenges, and the doctors said it was likely he would not live long. The baby remained on a ventilator, and due to the delicate nature of his skin, they were not permitted to hold or touch him.

They stayed at the hospital with him for months. During that time he was on a ventilator. He was also on steroids for this extreme lung scarring. He was in a palsy-like condition, and he couldn’t move his right side – only his left. The retinas were detaching in his eyes, and his hearing was non-responsive.

Soon, they began to ask when they could take him home. The doctors advised he couldn’t leave until he could feed without a tube. They tested him several times, but he didn’t adapt. Eventually, the family made the decision to take him totally off the tube feeding until he became hungry enough to eat. Even though he lost weight, he eventually became hungry and began to feed. At that time, they made it through the “exit” stage and went home.

At the 19-month point, a friend told them of Kindering. They made an appointment and took him in, and due to the immediate compassionate and professional response, Steve was convinced they were at the right place.

The results in the years that followed were nothing short of a miracle. Due to perseverance of the Kindering Center and the family teaming together, he slowly made progress.

In August 1995, their son went into Kindering in what seemed like a hopeless condition. In August 1996, he walked out of Kindering on his own.

Initially, he attended a deaf-only school. However, due to his progress, he was eventually mainstreamed into the Mercer Island public schools.

Steve recognized the BBRC for our years of support, but then thanked us, not for what happened in the past, but in advance, knowing that our continuing support will ensure Kindering remains here for years to come.

Ron Healy provided an inspirational invocation and led the club in the pledge. Paul Osborn introduced the guests and visiting Rotarians.

New member Traci Tenhulzen entertained the BBRC with the story of her life and her vocation. Traci moved to Washington on May 18th, 1980. For those who weren’t here at the time, that’s the day that Mount St. Helens blew.

Traci started a safety construction management company the area, and in 2002, she married Michael Tenhulzen. They share many passions. They both love the outdoors, including river rafting, kayaking, and skiing.

Soon after, they adopted Matthew at one day old.

In 2008, she sold her company to give her the opportunity to give full support the family business, Tenhulzen Remodeling, which has been around for over 30 years.

Traci spent the last several minutes showing beautiful “before and after” slides demonstrating the excellence of her family’s remodeling services.

Student of the Month: Jama Jama

Jama moved to Bellevue from Ohio in his junior year. Initially, he was in the ESL classes, and by his junior year, he was taking as many AP courses as possible. His counselors stated that he is currently taking the toughest possible schedule at the school.

In addition, he has served as the secretary of the Amnesty International Club and is also in the Diversity Club. He works at 15-18 hours a week, and also runs on the cross-country team. He has also served numerous hours of community service work, including time as a hospital volunteer.

Jama’s plan is to attend the UW next year and major in pre-med.

Auctioneer Tim Leahy announced that we are just five weeks from the big event. With a few very pointed questions, Tim demonstrated clearly that we are lagging in member sign-ups, team sign-ups, and sponsors. It’s time for us to get moving!

Three reps from the Bellevue Rotaract Club presented their program to raise money for uniforms for school children in Cuzco, Peru. The children attend a Legacy Humanitarian school, and the mission is to give hope and dreams that a happy life is achievable.

The uniforms each cost $30, and they hope to raise enough money for all 20 students to each receive one full outfit. The uniforms go beyond merely clothing the students; they promote a strong sense of belonging and community. However, the uniforms are unaffordable for the students’ families: $30 is approximately the equivalent of two weeks of a family’s wages.

To realize their goal, Rotaract is hosting a dinner Saturday, April 14th at 6 P.M. in Kirkland. To RSVP, please contact Sharalyn Ayala at the following email: international@bellevuerotaract.org

President John reminded the BBRC that we were selected by RI to be one of 200 pilots clubs for the Satellite Club concept, where very busy Rotarians will be able to attend “virtually.” The organizational meeting will be this Thursday, March 29th, at 5 P.M. at the Black Bottle in Bellevue.

Devon Hay from University Rotaract announced that they are raising money for scholarships for students doing service projects. Their fundraiser is April 6th from 5:30 to 8 P.M. at the Walker Ames Room, Kane Hall, on the UW Campus. Contact Devon Hay at 206-473-1891. Tickets are $25 for adults and $15 for students.

Committee Chair Alex Rule announced the upcoming service project in Ardmore Park, which is between NE 24th and Bel-Red Road in Redmond. The group will be working on trails this year.

Don Chandler, past BBRC president, had 6-way bypass this week and is in stable condition.

This year’s Rotating the Wheels will be held Saturday, June 30th, at the Redhook Brewery. More news to come.

The Magnificent seven plus a few more did a bunch of painting and general lounging around at Hopelink on Saturday March 11th.  If you missed the party, you missed the fun!

“The only truly serious questions are the ones that even a child can formulate.”