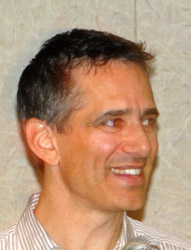 Larry Oberto discussed Oberto’s involvement with the hydroplane races in Seattle over the years.  Jason and Kitt were inducted into the club.  Diane Halcoussis from Eastside Prep is our student of the month.  Tim and Wendi generated a lot of buzz about our upcoming 10K race, and Chris Monger urged all members to join him in Cour De’ Alene for the District Conference and Club Retreat.

Seafair really took off in the 1950s and 1960s when Seattle was the “world capitol of boating” according to some in the community.  In 1974, though, the hydroplane races ran out of money and moved to Sand Point, where neighbors complained and the hydros almost went away for good.  Desperate times called for desperate measures. A telethon ensued and the races were saved.

Oberto had been a sponsor for those early years and continued to sponsor a boat that, according to Larry, “paid if the boat ran but it hardly ever ran.”

In the ’80s and ’90s, bigger sponsors came into the sport and many boats moved from piston engines to turbines. The Oberto boat stuck with pistons because turbines had challenges running in the salt water. And Oberto began winning as a result.  Oberto did move to turbines in the Tri-Cities, where they were “too fast, too soon” and wrecked in that area’s regatta.

In 2000, Oberto joined forces with Miss Madison and got competitive by staying out of the way of the fast boats. Oberto finished 4th, then 3rd, then 2nd, then the team needed a new boat.  Larry convinced the business and the family to promote a new boat for his dad’s 80th birthday. The new boat had a shark theme and received lots of exposure. The boat won the first year and three of the next four, generating even more positive exposure for Oberto.

Larry said the business of hydros has been good for Oberto because they can trade sponsorships for product placement, creating a win-win situation for many of Oberto’s

partners.  Overall, the Seafair return on investment was $363,000 last year. That is an indication that boats are not just a lot of fun for Larry and his family, but they are also good for business.

What about the future? Larry says they will continue to compete, just like in business: plan, then take the best chances with the least risk.

The meeting was underway with a recitation of the West Point Cadet prayer and the pledge.  Officiators were Jim Owens and Steve Peters/

We were joined by visiting Rotarians Debbie Moore from Issaquah and Brittany Barker from the other Bellevue Club.

Bob Holert introduced our student of the month, Diane Halcoussis from Eastside Prep. It just

so happened that it was Dianne’s birthday, so she was serenaded in BBRC fashion by the whole club.  Dianne looks forward to travelling and becoming fluent in Spanish. Her life’s desire is to combine a fluency in Spanish and a career in medicine to benefit those with medical challenges in the spanish speaking world.

Diane talked a lot about Destination Imagination, which combines drama and engineering to problem solving. It is a program which has given her many positive experiences and opportunities to shine and show off her problem solving prowess.

Two new members were inducted into the club. Jason and Kitt were welcomed with the traditional standing ovation and the

pronouncement that they were ” the newest Rotarians in the world.”

Dick Dandy (Brown) was on hand to give a weather forecast for the race, which he assured us, would not resemble recent wet weather. For the record, Dick said he had been out of town.

Current leaders for the race are:

Them top two teams so far are “Kiss of the Spider Monkey” and “Forrest Gump,” which Tim combined (as a suggestion to Wendi) “There’s a monkey in the forest, so kiss me!” For the record, she did not.  We currently have 680 participants, which is way behind the biggest Rotary run in the area, Mercer Island’s 5K, which had over 4,500 participants.

Catherine DeStafano noted that there is still time to get sponsors’ names on t-shirts and that social media is a good tool to get your friends and neighbors signed up and excited about the prospect of running.

Our German exchange student, Farina, announced that she had cookies and candies for sale at the meeting and that she would be cooking a traditional German dinner to benefit her travel fund. Stay tuned.

Alex Rule thanked all those who participated in the Preserving Planet Earth event last week. The group, totaling 35, spread 50 yards of bark on Saturday.

The Vashon Island Club is having a travel auction that could net our club 40 percent of the proceeds of anything we donate for the auction.

New Members will meet at Crossroads Food Court on Tuesday at 7 am.

All Golfers should plan to participate in a tournament on Friday morning.

John Martinka adjourned the meeting with a Lily Tomlin quote, reminding us that March is literacy month in Rotary. “If you read a lot of books, you are well read. Why is it that if you watch a lot of TV, you are not well viewed?”