The Positive Impact of Great Music in Times of Stress 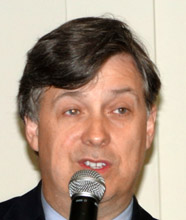 Simon Wood, Executive Director of the Seattle Symphony, commented on the positive impact great music can have in times of stress.  Simon also recounted the multitude of ways the Symphony reaches out to the public, their children, and members of the armed forces.  Joellen Monson introduced the leaders of the Youth Services sub-committees and short summaries were provided by each one.  Howard Johnson stressed that this Saturday, 6/9, is our last chance to secure the Golden Doughnut Award.

After the tragic shootings in Seattle, including that of Gloria Leonidas, he decided to go off his prepared remarks and reflect on the tragedy and the part that the arts and performing arts can play when such events happen. As he noted, often people in the cultural sector think of themselves as helpless and ill-equipped to deal with such events. However he shared his one experience as an example of how the arts and performing arts can play an important role in communities when tragedy strikes.

Simon was with the Philadelphia Orchestra when the World Trade Center attack occurred. He recalled that almost everyone in the Orchestra family was touched personally by the events in New York City. Within four days of the attack, the Orchestra put on a tribute/benefit concert. The orchestra was scheduled to leave Philadelphia for a nationwide tour within a week. The members of the Orchestra overwhelmingly voted to continue with the tour, believing that music has something powerful to say during such tragic times. Two of the pieces that had already been planned to be played on the tour, Beethoven’s Eroica Symphony, and Elgar’s Enigma Variations had particularly timely passages — the middle Funereal movement of Eroica and the Nimrod Variation by Elgar. Simon recounted how for many in their audiences, this was the first time they had gotten together in public since 9/11 and how they connected with the music.

Incidentally, one of the stops on the tour was Benaroya Hall, the first time Simon had been in it or in Seattle. Little did he know that ten years later he would be the Executive Director of the Symphony!

As for the current Orchestra plans, Simon stated that the intention is to provide a wide range of musical experiences for its audiences. He noted that people come to hear the Symphony for many reasons and they have a vast number of experiences when they attend. He said that with a new Executive Director and a new Musical Director, Ludovik Morlot, much at the Symphony has had to be rethought, including the mission of the Orchestra. Internally, artistic growth and adventure, hiring the right people, and stimulation of the musicians to do their very best are important goals. Externally, he hopes to change the relationship between the Orchestra and the community. As he pointed out, the Symphony is used to asking the community for many things but has not always been asking people what they want from the Orchestra. For instance, he was concerned about the small numbers of young people in the Hall. So they have initiated a kids attend free policy to encourage people, who might not otherwise be easily able to attend, to bring their children.

The Symphony is also commissioning classical composers to write works to honor Seattle rock legends like Jimi Hendrix and Quincy Jones and Nirvana, and to celebrate Asian music.

They are also providing access to communities that would not otherwise have access to the music, such as Senior Housing programs and a program with Joint Base Lewis-McChord to provide concerts for military families on Saturday mornings. Another unique program is the Past Prisoners Educational Group to help integrate former inmates back into society. Simon read a testimonial from one participant demonstrating that concerts can be a life-changing experience.

When asked if there are modern composers of note, Simon stated that this is truly the “Golden Age” of composing, with composers writing in every style imaginable. He noted that composing in the US is much more open to such expansive styles than Continental Europe or the UK where academic rules are still stricter in the classical music sphere. He also noted a program with the University of Washington School of Music to mentor and work with High School composers.

Simon noted that the Seattle Symphony is somewhat unique in that it derives over 50% of its income from ticket sales. This represents the fact that the Symphony has a very large number of events each year, surpassed only by the Los Angeles Philharmonic. In Europe, government subsidies provide 80-85% of orchestra funding. In the US it is only about 10%.

Other questions and answers were enlightening also. Simon confirmed that Benaroya Hall is a superb acoustical hall–one of the 5 best in the US. He noted that because of the great number of events, most of the musicians are salaried. He also spoke of the diversity of the offerings. For instance, Natalie Merchant and The Indigo Girls will perform with the Symphony this year. And he noted that the musicians are very versatile, able to play a wide range of music. With the busy schedule, rehearsal time is very short indeed. Simon did note that symphony musicians, while versatile, are not used to improvisation, so programs with jazz artists are not easy.

In short, the Seattle Symphony seems to be in very good hands!

Joellen Monson introduced the heads of the seven Youth Services sub-committees, who each spoke briefly about their subcommittees:

1. Student of the Month. Bob Holert and Larry May reminded that BBRC chooses each year 8 students from Sammamish High School and 8 from Eastside Preparatory Academy, Eastside Catholic, and Eastside Academy.

2. Scholarships. Tom Smith, who has been on this sub-committee since 1997, spoke about the now-$25,000 in scholarships that the BBRC offers. As he pointed out, this is truly a program that can and does change lives.

3. DECA. Tim Leahy is in charge of this sub-committee that offers leadership and entrepreneurial programs.

4. Interact. Morris Kremen chairs this sub-committee which is the Newport High School chapter of Rotaract.

5. RYLA. Reuben Ladlad is the long-time chair. He reminded that although we have budget to send four people, we have not been able to find four each year.

7. Adoption Party. Chuck Kimbrough is the chair. Chuck spoke fondly about the success of this program in getting foster children adopted and how the BBRC party has become the model for many other clubs.

If you are wondering where the tech program at Newport HS falls, since it has an international focus it is located under the International Committee.

Kit Bowerman is looking for items for the silent auction, which is part of the golf tournament. If you have items contact Kit at bowvet@comcast.net.

SGT Wendi squeezed a number of free coupons out of last week’s speaker, the local Yogurtland operator. She parsed them out to folks who had bought Get out of Jail free passes at the beginning of the year and then offered them at $1 each to everyone else.

Howard Johnson is looking for quite a few good men and women. He is bound and determined to again win the Golden Doughnut Award for the most participants at the First Harvest work parties. Right now BBRC has sent 251 with a goal of 275 and only one more Saturday to make the goal — Saturday, June 9. Be there or be square, as Howard would say. Please contact Howard if you do not know how to get to the Kent facility. We want another Doughnut! Don’t let Howard down!

Robertson Davies: The world is full of people, whose notion of a satisfactory future is, in fact, a return to the idealized past.

Simon has been the Executive Director of the Seattle Symphony since July 2011 - about a year.