Voyage from Honolulu to Japan 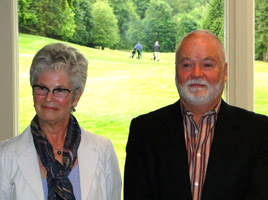 Our Guests, Don and Sharry Stabbert, gave us a fascinating description of taking the 75′ motor yacht Starr to and around Japan in 2010.  Wayne McCaulley honored his daughter Tara as our newest Paul Harris Fellow.  Lee Smith encourage us to sign up for at least 2 committees at next Friday’s meeting.  Tom Smith introduced our Scholarship Recipients for this year.

It was fascinating listening to Don & Sharry talk about their voyage from Honolulu to Ashiya, Japan from January to April 2010 followed by their adventures cruising around Japan for the next year. Their route from Honolulu to Japan took them to many of the islands that were in the Pacific Theater of World War II including the Marshall Islands and the Marianas Islands. They spent a lot time reading up on World War II history while cruising the vast Pacific Ocean. Sharry mentioned that she particularly wanted to visit Japan in order to experience all four seasons.

When they arrived in Japan, Starr became a Japanese vessel and would remain one during their year there which made it easier for them to cruise in Japanese waters. Their homeport was Ashiya. Shortly after their arrival, they were honored to be invited to the Shinto blessing of the fleet.

During their year in Japan, Don & Sharry cruised 1,600 miles. They were particularly impressed by the large presence of the Japanese Coast Guard and Navy and the amount of shipping traffic in Japanese waters. There would often be more than 20 boats within a three nautical mile radius which made navigating Japanese waters very challenging. They were also amazed by the size of the shipbuilding industry. In spite of all the shipping/boating activity in Japan, they hardly ever encountered pleasure craft. In fact, there weren’t any marinas built for pleasure craft so they often were docked alongside fishing boats and ferries. Apparently, the Japanese marine industry is all work and no play.

Don & Sharry particularly enjoyed the Flower Festival in Hiroshima and the peace cranes in Peace Park. They were impressed by the cosmopolitan environment of Nagasaki and the small fishing town of Hirado which was packed with history. They cruised to Yobuko where they tried squid, a Japanese delicacy. At the Yobuko festival Don participated in a giant tug-of-war between the sea people and the mountain people. It was no surprise that Don chose to be on the side of the sea people; however, they ultimately lost because they consumed too many beers.

In Yobuko, Don & Sharry made a new friend when they walked into a shop full of ship riggings and other ship stuff and inquired about who might assist them with splicing an anchor cable. Before they knew it, the man in the ship riggings store had called a friend who met them where Starr was docked and completed the re-splicing job. As the Japanese explained to them, “Sea people help sea people.”

Don & Sharry cruised to Hagi, where they were very impressed with the ceramics. They visited Izumo where they had the opportunity to peek in at a Shinto wedding. On New Years Eve, Don & Sharry were fortunate to be in Kyoto, which was blanketed in snow, to hear the temple bells ring in the New Year; the bells ring 108 times in order to dispel 108 Buddhist sins.

After the tsunami in March 2011, they motored back to Honolulu by a long and circuitous route to avoid the tremendous area of post tsunami flotsam and jetsam. They arrived at Waikiki Yacht Club, home sweet home, on April 29.

Since John Martinka was on vacation, John Dewater presided and called the meeting to order at 7:30am.

“On this day help us to mend a quarrel. Search out a forgotten friend. Dismiss a suspicion and replace it with trust. Write a note to someone who misses us. Keep a promise. Forget an old grudge. Examine our demands on others and vow to reduce them. Fight for a principle. Express our gratitude. Take a few minutes to appreciate what we have and the beauty that surrounds us. Tell someone we love them. Tell them again and again.”

Dick Brown introduced Wayne McCaulley who introduced his daughter, Tara, and congratulated her on becoming a Paul Harris Fellow. Wayne was also acknowledged because he has donated $3,000 to The Rotary Foundation.

Mike Ralph, Tim Moriarty, Chris Monger and Scott Sadler participated in a skit about the Bellevue Breakfast Rotary Club Charity Golf Classic which will be held at Willows Run on Monday, July 23. Mike and Tim played the announcers while Chris and Scott played the golfers. They encouraged everybody to sign up early and/or be a sponsor.

Lee Smith announced that there will be Committee Sign Up sheets at the meeting next Friday and encouraged everybody to sign up for the BBRC Committees in which they are interested in participating. Remember—everybody is expected to sign up for at least two committees.

the room. New scholarship recipients from Sammamish High School are Molly Higgins, Jama Jama, Aries Almanza-Almonte and Chin Sok Tang; returning scholarship recipients are Shabana Pervez and Elizabeth Pacewicz-Tierney. Tom introduced each of them and told us they were receiving scholarships because their values aligned with BBRC’s values and they demonstrated a need for scholarship monies. Tom asked them how the scholarship would change their life and most responded that it would allow them more time to volunteer for worthy projects in their community. The total amount of scholarship money granted to the students was $26,500, the most that BBRC has ever given. Tom also acknowledged the students’ families, school principal and counselors.

1. Paul Chapman reminded everybody to sign up on line for the Rotating the Wheels dinner to be held at the Red Hook Brewery in Woodinville on Saturday, June 30.

2. Chris Monger invited members to the Seattle Metropolitan Poker Club, which will meet at the Rainier Club in downtown Seattle on Friday, June 15 at 6:00pm. A third of all proceeds from BBRC members and their guests comes back to the BBRC!

“I have no interest in sailing around the world. Not that there is any lack of requests for me to do so.” -Edward Heath

Don & Sharry Stabbert, a Seattle couple who motored their 75’ motor yacht Starr to Japan and spent a year exploring there. Don & Sharry are known to many as investors who modernized Kirkland for the 21st century by developing the building and Marina and office building that houses Anthony’s and many nearby apartment and retail properties.