The Story of an Entrepreneur’s Career – How Did I End Up Here? 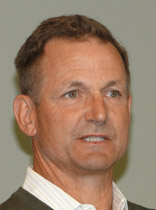 Gregg Bennett introduced us to the joys and frustrations of being the entrepreneur behind a small, but growing, franchise system called Yogurtland.  Sargent at Arms Wendi Fischer played blindfold chess and raised a pile of money for the Rorary Foundation.  We were proud to note 11 individuals who had made multiple contributions to the Rotary Foundation.

Yogurtland provides a customer experience where you have sixteen self-serve yogurt machines with accompanying fruit and dry toppings to provide the custom yogurt treat of your dreams. The target demographic is teenage youth with a strong emphasis on social media.

At first blush the concept is pretty simple: You fill the machines, the customers fill their cups, you weigh the cup and collect the money. The key is high volume to allow a low price for the yogurt. Gregg believes that it takes a population of 80,000 to support one yogurt store, so there appears to be a build out of excess stores in Bellevue and Mercer Island. With a franchise you also have the associated start-up fees, capital equipment investment, (Each machine has a cost of $14,000!), real estate expenses, and fees based upon sales volume. Competition is also factor with “Menchies” being most noted in the presentation as a strong competitor.

Gregg has opened a Yogurtland in Bellevue on Bellevue Way, “across from Safeway”, but for BBRC members this location can best be found by saying it is the building directly south of Alvin Goldfarb Jeweler. (Ask Steve how the yogurt tastes.)

During the Q&A Gregg disclosed that yogurt sales are a pretty good indication of the weather. Sunny days bring higher sales. The “secrets” to his success include: 1) Don’t let anyone get in your way. 2) Be in the broker flow for good locations and 3) Assume that you are as smart as the other guys in the room.

When asked what his exit strategy might be for Yogurtland, Gregg disclosed that he did not have one, so for the foreseeable future, Gregg and Yogurtland are one.

For his talk President John presented Gregg with a card indicating that one thousand pounds of fresh produce will be donated in his honor to local food banks by Rotary First Harvest.

Memorial Day weekend. Jane Kuechle led us through an invocation with the plea not to forget to remember the many who have served our county followed by the Pledge of Allegiance. Steve Luplow introduced the solo visiting Rotarian, Assistant District Governor, Chris Boland of the Woodinville Club. Chris Monger introduced his neighbor, Arnie Henderson for the second time.

Stand-by-for-Blast-Off Department: President John reported that the initial meeting for the BBRC’s Satellite Club went well with strong interest from ten prospective members. The satellite club is expected to be up and in orbit on July 1, 2012, providing members with varied venues and times other than our traditional Friday morning meeting time. The members of the Satellite club will be considered regular members of the BBRC, but they will not normally be seen at the Friday morning meetings.

representing positions of the chess board. It was the objective of the Queen to capture the King in five moves, or less, with the King, a resurrection of the late Burger King mascot, being played by our Assistant District Governor, Chris Boland. Each table was to wager if the five-move capture would happen, and then the whole skit slid into a chaotic jumble when the King was awarded three blocking pawns. The end result: The BBRC Foundation is a winner as each member placed a dollar on the table.

Congratulations to these members and all of you in the BBRC for supporting the Rotary Foundation.

Rotating the Wheels: You are invited to celebrate the successful year of John Martinka and to welcome Chris Monger as he commences his term as BBRC President. RTW will be held the evening of June 30th, 2012, at the Redhook Brewery in Woodinville.

Just go to www.bbrc.net, scroll to Coming Events and click “Register Here”. Follow the prompts to register and pay.

Yes, it is that easy.

BBRC 2012 Retreat Wrap Up: President Elect Chris Monger provided an over view of this year’s Retreat which gathered ideas from an in meeting session on April 13th and a session at the District Conference. Topics included 1) How do we continue to make our meetings shine for members, guests and visitors? 2) BBRC is in its midlife; What needs to be done to continue to prosper and keep our members engaged and involved in the club and our community? 3) Should the BBRC take on another large community project?

Chris provided the findings of the sessions and also provided a four page hand out with details. Contact Chris if you did not pick up a copy.

Many opportunities for Rotary training with over 30 breakout sessions! This is must for club leaders and not a bad idea for the rest of us.

When most of us have a mid-life crisis we find our red sports car, or set off on a new career path. Gregg Bennett chose the path less traveled at that point in his life as an entrepreneurial developer of hospital bench marking and found that being the Washington franchise holder of Yogurtland offered a new challenge in the world of retailing.