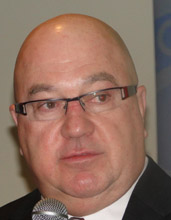 IN THIS ISSUE
Husky Bob Holert stepped up to introduce our guest, Mariners GM Jack Zduriencik.  Jack talked extensively about the upcoming season and a number of trades and acquisitions the club has made in recent days and weeks.  Colleen Turner and Bob Maloney reminded all to sign up for the Valentine’s Day Dine around.  Jane Kuechle gave a report on the Partners for Work program.  Mike Ralph reported on the International Service Committee.
THIS WEEK’S SPEAKER PROGRAM

Husky Bob Holert stepped up to the plate wearing a red Mariners hat to a musical introduction of “Take Me Out to the Ballgame” to introduce our guest, Mariners GM Jack Zduriencik. Bob noted Jack’s community involvement and service noting that Jack has worked for numerous local charities including Cystic Fibrosis, Boy Scouts, Make a Wish and others. Bob noted that Jack had received the Moose Clausen Award for community service given by the RBI Club.

Jack talked extensively about the upcoming season and a number of trades and acquisitions the club has made in recent days and weeks. He mentioned that the Mariners’ minor league affiliates were ranked 24th in baseball when he arrived and are now ranked second in baseball in terms of prospects.

As an aside, he talked about the recent trade that brought Mike Morse to the Mariners in exchange for John Jaso. He said Morse was very excited to come back to Seattle, citing unfinished business as a motivator. By contrast, Jaso, upon hearing of the trade, was somewhat distraught he would now have to pay California taxes.

In terms of prospects, the Mariners look to be set for years. Pitcher Taiwan Walker is the number one prospect in baseball, Danny Hultzen is the number two left hand pitching prospect and pitcher James Paxton and catcher Mike Zunino are on the hot list as well.

While emphasizing youth, Jack also mentioned the desire to bring in some veterans to balance the club. Over the winter, the M’s acquired Kendrys Morales from the Angels, Jason Bay from New York and signed free agent fan favorite Raul Ibanez.

Jack said the club needed to blend veterans and youngsters to be successful, but was particularly eager to see the youngsters perform at the major league level. He said that having players come through the system gives fans and players extra enthusiasm because they are home grown and developed as “your own,” conveying a real sense of pride and anticipation.

Jack touched on some of the new features in Safeco Field. Left field will feature the Edgar Martinez Cantina. The center field “Pen” has been expanded and will again feature good times under the sun. Also, the ballpark will have the second largest scoreboard in sport, behind only the megatron in Dallas.

Jack said the strength of the organization will continue to be pitching and middle infeld, although the club will not hesitate to make a deal or two to bolster the club’s offense. Several positions will feature competitions including First Base where Justin Smoak, Mike Carp, Kendrys Morales and Mike Morse will be in the mix. It’s expected that Jesus Montero will be the catcher on a daily basis, although there will likely be another catcher acquired. It is uncertain as to whether minor league superstar Mike Zunino is ready for the major leagues, but Jack expects him to continue to matriculate through the system.

Scott Sadler called the meeting to order, noting that President Chris Monger was on an R and R mission in Hawaii.

The meeting began with the traditional musical call to order in the form of “Waltzing Matilda.” The music was explained by Brian Evison, who told the club that it was Australia Day.

Colleen Turner gave the invocation in the form of St. Francis of Assisi’s prayer. Nic Wildman introduced visitors and

The 10k is moving along well. The sponsorship list is rounding out, but we can always use more. Registration opened last week, so if you have a desire to run or a group to sign up, now is the time. President (for the day) Scott reminded the club that we all have an obligation to raise $800- $1000 annually.

Jane Kuechle gave a report on the Partners for Work program. She introduced our own intern Kiley, who has been greeting and setting up club meetings at BBRC for some time. Kiley has been hired to do light office work and filing for another company, so this was her final BBRC meeting.

Jane explained that the Partners for Work program is designed to give developmentally disabled young adults an opportunity to work part time in an office environment. From now until June 15, the BBRC will compete against the Bellevue noon club for verifiable leads into the program, so if you know of a prospective employer, let Jane know!

Mike Ralph reported on the International Service Committee. The latest project is a water project in Colombia that was financed, in part, by a matching grant from RI. A group will go to Bogota in February and May to participate. Clean water will be provided for 600 people as a result of the project.

Madeline Gauthier reminded the club of RYLA in February. If you have a worthy young man or woman you can recommend, contact Lynne.

Not anyone in the country is free until we are all free. –Jackie Robinson

“If you don’t know where you are going, you’ll end up someplace else.” ? Yogi Berra

Jack has worked for numerous local charities including Cystic Fibrosis, Boy Scouts, Make a Wish and others. Bob noted that Jack had received the Moose Clausen Award for community service given by the RBI Club.