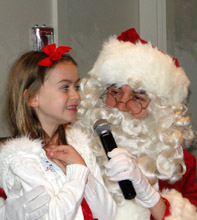 The December 21st meeting was the annual Holiday Party with spouses and offspring in attendance. Eric Ode played background music on the baby grand piano while guests gathered and had breakfast. President Chris Monger opened the gathering and then turned the mike over to Wendy Fischer who led the invocation and flag salute. Paul Chapman then took over as Master of Ceremonies for the rest of the Holiday Program. Kari Anderson and Lauren Ralph performed a duet followed by Kim Dreibratt, Club Administrator, recognizing the Glendale staff. Kate Fischer soloed followed by an invitation for the kids to come forward and sing with Eric Ode. Santa arrived, talked with the kids and gave each one a toy. Paul wrapped up the show.

Chris opened the morning by ringing the bell and stating he wasn’t in charge. Wendy Fischer had arranged the program for today she took over for him. Wendy used a reading from Dr. Seuss’ book “The Grinch Who Stole Christmas” as the invocation. She then led the flag salute and turned the mike over to Paul Chapman, the MC for the morning.

Kari Anderson[/caption] who proceeded to sing a duet about all the good things they could do because they are angels. “Yes I’m an ANGEL A-N-G-E-L……. angel”.   [caption id="attachment_2631" align="alignleft" width="120"]

Kim Dreibratt[/caption] Kim Dreibratt took the opportunity of a break in the action after the solo, to recognize the kitchen staff, wait-staff and maintenance staff for their service. Kim and staff were followed by Kate Fischer singing a solo “My Sister”, [caption id="attachment_2638" align="alignright" width="527"]

The Infamous Crew[/caption] assisted by her silent brother.                   Eric Ode then invited the kids forward to participate in singing and games. They started with “We Wish You a Merry [caption id="attachment_2628" align="alignleft" width="120"]

Christmas” followed by; “Here is My Hat for My Head” with lyrics along this line:

Eric then led the kids in “Partridge in a Pear Tree” with appropriate calisthenics followed by a puppet dialog with the singing of “Frosty the Snowman”. While the kids sang “Here Comes Santa Claus” he entered! He had gifts for everyone including:

Victoria Et al The meeting was adjourned with wishes for a Glorious Holiday Season for all.