Building a Company to Sell 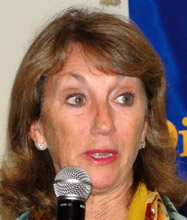 Renee Behnke, Co-Founder and former COO of Sur La Table, spoke on building a company to sell – and eventually satisfying your investors.  Madeline Gauthier is our Rotarian of the Month for December.  Kyle Smit is our Student of the Month from Bellevue Christian.  Paul Chapman and John DeWater introduced Kinetic Learning as  a method to remind us about the off-site meeting at Coal Creek YMCA on January 4th.

In 1995, Renée’s husband’s family purchased Sur La Table. At that time, there was only one Sur La Table store and it was located at Pike Place Market. It was a $2 million store with eight employees and the Behnke family wanted to build a viable brand that would successfully compete with Williams-Sonoma and expand nationwide. In order to do this, the Behnke family needed to attract outside investors and in 1997, three local families each invested $2 million (Round A). At this point, Renée stressed the importance of making sure that her family was on board due to increasing commitments on her time and that her employees understood her goals for expansion of the company.

By 2000, Sur La Table had 13 stores and needed additional capital in order to expand further and to help with its e-commerce efforts. Renée embarked on a road show and secured funding from a private equity firm (Round B). During Round B, executives received shares in the company. From 2000-2009, Sur La Table expanded from 13 to 75 stores and in 2009, Renée stepped down from day-to-day operations of the business and the family began to think about an exit strategy.

Before embarking on both Round A and Round B funding, Renée wrestled with the important question of dilution of ownership and the Behnke family opted to match outside investments dollar for dollar in order to retain control of the company.

In 2011, Sur La Table was sold to an investment management company; the Behnke family and the private equity firm from which Sur La Table had raised additional capital in 2000 retained a stake in the company while the three local families who had invested in 1997 in Round A cashed out. Although these three families made money, Renée felt they were not well-protected and should have earned more given the risk they had assumed. She learned the lesson that it is important to protect early investors.

Based on questions by our members, Renée remarked that people still appreciate small retailers like Sur La Table and the excellent customer service they provide. Sur La Table provides excellent training to its employees on how to sell kitchen tools and understands that consumer preferences vary depending on the region where they live. Sur La Table offers the largest avocational culinary instruction program in the United States and it is growing. Business is good — Sur La Table expects to open 12 new stores in 2013.

Chris Monger called the meeting to order at 7:30am with a music eye opener, On a Carousel, by The Hollies.

“Lord, God & Heavenly Father, this is the time of the year when many of us focus on the spiritual side of our lives, when we consider what light we follow….

Help us to understand that the true meaning of The Golden Rule (do unto others as you would have others do unto you) is indeed the true guidepost by which we can mark the trails of our existence. Remind us that if the Golden Rule were universally held as a standard by the people of all nations and faiths, there would be no wars, no hunger and no crimes against one another.

Since we believe that one manifestation of the Golden Rule is our Rotary motto, “Service above Self,” we pray that you continue to bless the work that we as Rotarians do to help those less fortunate. We pray that you guide the decisions of government leaders and that their efforts will be motivated by this same great rule of charity and good will.

Please give us an international time of peace on earth and good will towards men, inspired by you, O Lord. Amen.”

After the invocation and Pledge, Jason Cherney introduced our guests.

Chris presented Madeline Gauthier with the Rotarian of the Month award for November for her commitment to kids and her dedication to running the Adoption Party.

Larry May presented the Student of the Month award to Kyle Smit, a senior at Bellevue Christian. Kyle has a 3.97 GPA and is a member of the National Honor Society. Service is important to Kyle and he wants to demonstrate it in his daily life. He has participated in a mission trip to El Salvador to help those with no access to running water. Kyle aspires to be a mechanical or civil engineer.

Jenny Andrews introduced Nic Wildeman, co-founder of Lionfish, an international marketing and advertising agency. Nic was accompanied by his wife, Gloria, who is also a co-founder of Lionfish. Jenny met Nic while working at Overlake Hospital and is impressed with Lionfish’s dedication to giving back. Each holiday season, Lionfish selects 12 charities to receive financial support. In addition, Lionfish teams volunteer for or provide ongoing pro bono services to a number of community organizations. After Jenny’s introduction, Chris inducted Nic into the BBRC.

To the tune of YMCA, our kinetic learners spelled Y-M-C-A with their hands. It’s fun to stay at the YMCA ……. No doubt it will be just as much fun to meet at the Coal Creek YMCA on January 4.

1. Wendi Fischer reminded everybody to vote for Rotary International in the 10 Million Charity Miles Giveaway at http://10millioncharitymiles.com. Vote everyday on every device you own (i.e. laptop, iPad, cell phone, etc.) through December 25.

2. Tom Helbling announced Golfing with the Elves at Mt Si Golf Course (9010 Boalch Ave. SE, Snoqualmie, WA) on December 24 at 8:45am. This is BBRC’s traditional golf outing on Christmas Eve. To reserve a spot for you and your friends, email Tom at tjhelbling@comcast.net by Friday, December 21.

“Never eat more than you can lift.” –Miss Piggy of The Muppets.

Renée was born in Portland and is the oldest of five children. Her family didn’t have a lot of money and instilled within her a strong work ethic. As a child, Renée harvested vegetables and fruits from her family’s large garden. Good food and cooking were a large part of her life from an early age. In 1995, the family of Renee's husband bought one small French cooking store at the Pike Place Market. She had the opportunity, at that time, to develop a retail concept - a kitchenware store that would offer tools and serving pieces for the multi-cultural cuisine we all enjoy preparing and serving today. They started by including cooking programs for beginners by their professional level customers. They built the concept from the one store originally purchased to 67 stores before stepping back in 2009. The company was sold in 2011.