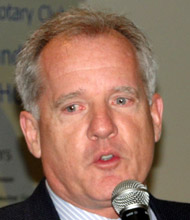 Rick Holly from Plum Creek gave us a summary of the companies’ investment and growth in the Wood Products Industry.  Contrary to popular belief, the number of trees in the US has actually increased by 50% since the 50’s.  Jeff Cashman, Jeannie Thorsen and Kim Schrader announced that 80 percent of the club had contributed to the Rotary International Foundation this Rotary year.  Bob Holert introduced student of the month, Elnur Sharifov, from Sammamish High School.  President Chris officiated the annual meeting, which consisted of the annual election of a slate of officers for the next Rotary year. The incoming slate was announced and a motion was made by Chuck Barnes to elect the slate. Chuck Kimbrough seconded the motion and it passed unanimously.

Holly began his remarks with an overview of Plum Creek’s business. The company is the biggest private landowner in the country. The federal government is the biggest, but Plum Creek manages some 6.4 million acres.

Plum Creek started as a spinoff of Burlington Northern in 1989. The company originated as a timber company in eight states, then expanded south and into Maine, where the company expanded its assets 350 percent.

In 1999, the company became a timber REIT to attract institutional investors. The company merged with The Timber Company, formerly Georgia Pacific. Plum Creek expanded to 8 million acres and $5 billion net worth. As a result of changes, the company had 40 percent institutional ownership and 180,000 shareholders.

In the East, Holly explained, many people wonder if there are any trees left in the west. According to Holly, the western United States has some 755 million acres of forested land, around one-third of the total land base. In fact, trees have increased 50 percent since 1953.

Holly said that forests have many features that benefit humankind. Forests are carbon sequestration vehicles and they recharge and filter water as rain perks through the forest floor. Younger trees will sequester more carbon as they grow to maturity, auguring for more active forest management. One of the greatest challenges faced by timber companies such as Plum Creek is how to monetize the benefits of forest lands.

The value of a tree after it has grown for approximately 25 years is approximately $28 per ton. That value is comprised of logs, pulp wood and even limbs, which are used for energy production.

The outlook for the timber industry is uncertain. The regulatory environment, less paper production, constrained capacity for logging and muted housing demand all are factors that contribute to the unknown future of timber.

The good news for timber includes a housing recovery, more demand for US lumber, although that good news comes at the expense of Canadian timber, which has been devastated by beetle infestations. Also, China is demanding more logs from North America. Finally, wood pellets are a growth area due to a recent emphasis on bio energy.

The meeting was called to order by President Chris, who cued up “Rockin’ Around the Christmas Tree.”

Steven and Berra from Eastside Rotaract informed the club of See’s candy bars for sale to benefit victims of Hurricane Sandy on the East coast. Also, the duo encouraged all members to sign up to host a Rotaract meeting.

President Chris recognized Roger Allington, who asked to be fined for his new haircut. Roger was sporting a buzz cut in anticipation of chemo therapy for cancer. Roger reported that his treatments were going well with limited side effects.

Paul Osborne announced a $5,500 club grant that was leveraged to $66,000 via Rotary International to combat malaria in partnership with World Vision.

Jeff Cashman, Jeannie Thorsen and Kim Schrader announced that 80 percent of the club had contributed to the Rotary International Foundation this Rotary year. The club is aiming for 100 percent participation as part of the “Every Rotarian Every Year” effort. They conducted a raffle that awarded gift baskets to eight lucky Rotarians who had already contributed to the foundation.

Bob Holert introduced student of the month, Elnur Sharifov, from Sammamish High School. Elnur talked about his experience as an

immigrant from Azerbaijan and as an American high school student. He discussed his love of learning, especially with regard to calculus and finding solutions through laws. He also said that he had community service hours in a warehouse helping a food bank that turned into a job offer, only to find out he couldn’t take the job due to his age. He plans to attend Bellevue College, then transfer to the University of Washington.

President Chris officiated the annual meeting, which consisted of the annual election of a slate of officers for the next Rotary year. The incoming slate was announced and a motion was made by Chuck Barnes to elect the slate. Chuck Kimbrough seconded the motion and it passed unanimously.

The Holiday Party is fast approaching. Kim needs to know whether you are attending and bringing guests on the morning of December 21. Santa needs to know how many good girls and boys will be at Glendale so he can be prepared.

Gifts for the giving tree are at the 75 percent level as of this meeting. We need the other 25 percent of gifts from the tree to be returned this week. Gifts should be unwrapped.

District Governor Steve Lingenbrink announced that the district’s holiday party will be on 12/15 from 6 to 8 pm at the Rainier Club in Seattle. Entertainment will include the BBRC’s own Chip Ericksen.

BBRCer Tom Harrelson is battling Parkinson’s and is at Overlake Hospital undergoing treatments. If members would like to greet him, he would love to hear from Rotarians.