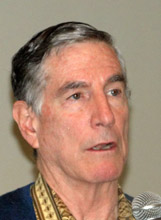 Paul Osborn introduced Jim Moore, Bill and Karen Feldt who are battling malaria in Zambia. Jim Moore is the leading malaria activist from the Federal Way Rotary Club. He started by stating that the female Anopheles mosquito is not born with malaria, it can only infect another person with malaria if the mosquito has bitted a person or animal with malaria, therefore the effort is to break the transmission chain between mosquito and humans. The RotarianMalaria Partnership, among other things, is distributing mosquito netting impregnated with insecticide. Thus the netting not only protects the person from being bitten but also kills the mosquito – the nets are in effect a low-cost mosquito trap with humans as the bait.

A Voice of America video was shown illustrating the leadership of local Zambia Rotary Clubs in providing nets aimed specifically at the elderly, pregnant and those under 5 years. Mosquito nets are a priority! Malaria kills 6 million people each year; mostly children under age five. Sixty percent of pregnant women who miscarry have malaria.

Rotary asked “What follows Polio” as a cause. The answer, “Malaria”! There are 250 million cases of malaria in the world and Rotary has taken the initiative to eradicate this disease. The Kalulushi Project in Zambia is well under way and is a pattern of efforts to follow.

with malaria are treated with medicine as treating those without malaria makes the medicine less effective if that person ever contracts malaria in the future. Vaccines are being developed but so far they are only about 50% effective.

The Bill & Malinda Gates Foundation and World Vision are involved in this project as are nine Rotary Clubs. The next trip to Zambia is set for June and July of 2013 and BBRC members are invited to participate.

Chris thanked Jim Moore and the Feldts for the presentation and advised them that 1,000 pounds of fresh produce would be donated to Rotary First Harvest in their name.

President Chris opened the meeting at 7:34 by noting past and present BBRC members with serious ailments:

• Phil Salvatore had a stroke and is at Overlake Hospital (Connie Salvatore asks that Phil have no visitors but cards and email are welcome.)

• Lee Smith has the shingles

Jane Kuechle noting her energetic work on behalf of Partners for Work; a program to integrate the less fortunate into the normal work force.

Bob Holert introduced Preston Kuloloia as the Sammamish High School Student of the Month. Sixteen-year-old Preston carries a full academic load, is a student athletic trainer, Home Health Aide and is active in Club Operation Smile, an organization that funds correction of cleft pallet in children. His sports activities include track and firld as well as Club Volleyball. He plans to attend Washington State University to become an Advanced Practice Nurse so as to work in trauma centers such as Harborview.

Dick Brown awarded certificates and/or pins to the following people for their contributions to the Paul Harris Society:

Altogether these members have contributed over $61,000 to Rotary Foundation via the Paul Harris Society.

Scott Sadler reminded all of the upcoming 10K run/walk. Jim Carney asked for more sponsors for the 10K. Madeline Gautier asked for applications for RYLA as there are three scholarships available. Jim Carney announced that 40 people signed up for the Valentine Dine Around. Chuck Kimbrough reminded all of the New Members meeting Wednesday next and suggested old members might learn something by also

A team of the BBRC crew wore red Friday to celebrate Heart Health for women.

“If you think you are too insignificant or small to make a difference, you never spent a night with a mosquito!” (African proverb)

Jim Moore (Federal Way Rotary Club) from the Rotarian Malaria Partnership will talk to the club about how our District in conjunction with PATH are helping to fight Malaria in Zambia.