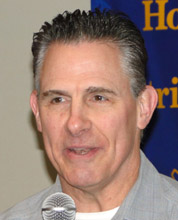 Bill Krueger, former Seattle Mariner and major league left-handed pitcher, poignantly told his story about how blessed he was to have a new lease on life after suffering cardiac arrest. He believes his life was saved because the Pro Sports Club had personnel who were trained to use the automated external defibrillator (AED) that was available in the event of an emergency.  Nic Wildeman showed us Rotary International’s This Close ad, which features many people making the “this close” symbol with their hands indicating how close we are to eradicating polio.  Bob Holert presented the Student of the Month award to Telma Fuentes, a senior at Sammamish High School.  Dick Brown presented John and Jan Martinka with the Major Donor Award, which is given to those who have contributed more than $10,000 to the Rotary Foundation.  Chris presented Traci Tenholzen with her Blue Badge.  Katherine De Stephano recognized the many companies who have been speaker sponsors over the past few months.

Bill poignantly told his story about how blessed he was to have a new lease on life after suffering cardiac arrest. On the morning of August 10, 2012, while riding the elliptical machine at the Pro Sports Club , Bill suddenly collapsed. The next thing he knew he was being wheeled out of the club to Overlake Hospital.

He believes his life was saved because the Pro Sports Club had personnel who were trained to use the automated external defibrillator (AED) that was available in the event of an emergency. In this traumatic situation, timing is of the essence and fortunately, it took only one minute to re-start his heart.

After tests were administered at Overlake Hospital, Bill discovered there was no damage to his heart and he credits the personnel at Pro Sports Club for preventing it. However, an angiogram indicated that his left main artery was 100% blocked. He underwent surgery to have a stent installed and was awake the entire time. Two days after suffering cardiac arrest, he was released from the hospital.

Bill relayed that this near-death experience caused him to re-prioritize his life. He lost weight, changed his diet and exercised more consistently. He learned that he could reduce the risk of heart disease by 30% if he walked 30 minutes per day.

He also did some soul-searching to figure out why this had happened to him. During his last physical, which was four years ago, his cholesterol measured 238. Within the past four years, he had also suffered an aneurysm behind his left eye. And, he had been feeling more tired than usual before his heart attack. In retrospect, these symptoms should have told him that something was up but he ignored them.

Since his heart attack, Bill has told his story to a lot of people and encouraged them to take good care of their health and get a physical every year. He ended his presentation by telling us about a friend of his who suddenly felt very ill while driving, thought of Bill’s experience , and drove himself quickly to the nearest fire station where he promptly went into cardiac arrest.

Traci Tenholzen relayed how the ski patrol has saved three lives due to the availability of AEDs on the slopes.

Chris Monger called the meeting to order at 7:30am with a music eye opener, Uptight (Everything’s Alright), by Stevie Wonder.

“Dear Lord, Thank you for Rotary, for the fellowship and for a chance to get out of ourselves and serve others. Help us to find ways to make a difference in someone’s life today, to lift up a good cause, to reach out to a friend in need. Help us to listen more than talk, to lead if leadership is called for and to be humble in all things. Guide us in our discussion and thoughts and actions so that at the end of the day we can say we did our best to serve. In your holy name we pray. Amen.”

Craig Nelson made an announcement about “Grape Escape 2013,” to be held on Thursday night, March 7 from 6:00pm – 9:00pm at Pickering Barn in Issaquah. This is an evening of tasting fine wines from twenty local wineries, small plates from a dozen of Issaquah’s finest restaurants and specialty beers from area microbreweries. Tickets are $40 per person. Tickets can be purchased online at http://grapeescape.eventbrite.com/# or directly from an Issaquah Rotarian. Please note that attendees must be 21 or older.

Nic Wildeman showed us Rotary International’s This Close ad, which features many people making the “this close” symbol with their hands indicating how close we are to eradicating polio. He challenged the BBRC to raise $5,000 for the campaign to eradicate polio, which will help our Club to win the Presidential Citation award. More information can be found at www.endpolionow.org.

Bob Holert presented the Student of the Month award to Telma Fuentes, a senior at Sammamish High School. Telma came to the U.S. from Mexico when she was eight years old. She has a 3.7 GPA, is a member of the National Honors Society and has taken a lot of Advanced Placement classes. Telma is involved in JV swimming, JV track and field and JV soccer. She has participated in community service activities for Latino HEAT, Latina Twilight camp, Walk for Aidan and Jubilee Reach. Her goal is to graduate from college so that she can provide her Mom with a better life and help those in her community.

Dick Brown presented John and Jan Martinka with the Major Donor Award, which is given to those who have contributed more than $10,000 to the Rotary Foundation. John and Jan were presented with a Rotary pin with a diamond in the center and a piece of crystal engraved with doves.

Girish Bhatia announced that the Bellevue 10K would be held in 12 weeks. He will be distributing a communications piece about the event via email which he asked us to share with local fitness clubs. He also said that we could now register a team at www.bellevuerun.com without incurring a registration fee. He asked us to think about where we might distribute brochures once they are available.

Jim Carney announced that there would be a cocktail party for Bellevue 10K sponsors to be held in mid-March.

Katherine De Stephano recognized the following companies who have been speaker sponsors over the past few months:

She asked for volunteers for speaker sponsors in April, May and June and the following members volunteered:

The speaker sponsors contribute $160, which pays for the 1,000 pounds of produce donated to Rotary First Harvest in the speakers’ names.

Chris presented Traci Tenholzen with her Blue Badge. While presenting it to her, Chris asked Traci the most difficult thing she had to do to fulfill the requirements. Traci responded, “Getting up in the morning.”

I got a sense of déjà-vu when Wendi Fischer substituted for Tim Johnstone as Sergeant-at-Arms. In order to avoid paying the $1 fine, members had to guess which of the eight people at her table didn’t belong. No one guessed that Girish didn’t belong because he was the only one who had a man’s name. It wasn’t because Girish was the only man at the table, but the names of the other men at the table (Chris and Robin) are also women’s names.

“If love is blind, why is lingerie so popular?” –Anonymous

Bill Krueger, former Seattle Mariner and major league left handed pitcher and present baseball analyst. In late 2012, Bill was working out and had a heart attack. Through the grace of God and the fact there was medical help close at hand, he survived! Bill will help all of us understand the value of good health and the warning signs we need to look for if you have health issues.