Insights From a Bumpy Road 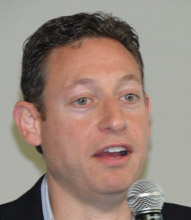 Rourke O’Brien introduced our speaker, Ian Morris, President and CEO of Market leader, a leader in the providing full service application software for the real estate industry. Ann Norman spoke about our Rotary Exchange Program.  Rueben Ladlad and Scott Sadler summarized our success in the Golf Tournament.  Michel Carter showed us a video from that event.

The company is a leader in the providing full service application software for the real estate industry. Its software allows for capturing clients, managing contacts, developing websites and providing multiple templates. It calls Kirkland its home but has offices in Seattle and Denver for its 250 employees.

Ian joined the company when it was called Home Values, when it was providing lead generation. By then it was a $20 million company but sales had flattened. Within a year sales were at $100 million and the company was deep into software for the industry. It went public in 2004.

The company has been through the disasters which befell the real estate industry and is still going strong. Ian attributes that in part to a strong strategic board of directors. Somewhat counter-intuitively, since the real estate business is very local and operating through brokers and associates, Ian has led the company to market to the large international real estate firms. The rationale is that they control the internal software platforms that their realtors use. The strategy has paid off.

Through the tough times and the good times, Ian has come up with some lessons learned:

Thanks, Ian, for a candid and interesting discussion of Market leader’s success!

President Monger called the meeting to order in a timely fashion. Fred

Barkman delivered the Invocation, a passage from the Episcopal Book of Common Prayer, and the Pledge of Allegiance. Steve Vincent introduced visiting Rotarians and guests.

John Martinka announced that the Grant for the next Antigua project has been approved on the District level, which means that approval on the higher level will be forthcoming shortly. He stressed the importance of metrics and measurement of benefit in grants and gave several examples of how the benefit of the previous Antigua projects has been measured, including how the Antigua government has been incorporating the computer lab training into the curricula of primary and secondary school.

Ann Norman announced that our exchange student, Wendi, has arrived in Seattle from Finland. Our exchange student on her way to France in seventeen days, Gabby, was in attendance with her parents. She is clearly excited about her upcoming adventure!

Reuben Ladlad and Scott Sadler gave a wrap-up of the recent Golf Tournament. Over $30,000 was raised. Though this was less than the $39,000 from last year it was still a great start to the fundraising year. Reuben attributed the lower figure to about $7000

less in sponsorships and fewer participants — 108 as compared to 122 last year.

Lenny Lutes will be the chairperson for next year’s event. A list of all the sponsors will be on the BBRC website soon. Thanks to all who made the Tournament possible!

Michel Carter did a great video of the Tournament which he proudly showed. His professionalism shows in his work! Great job Michel!