Iran and the United States – Post Axis of Evil 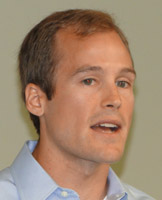 Jeff Gordon gave us a timely and interesting summary of Iran today and the history and policy that has led to the present tension in the region.  He also stated that there are reasons to be optimistic about the future of Iran and the United States.  President Monger gave us a summary of upcoming meeting alterations and offsite gatherings.  Wendi Fischer summarized the benefits and lessons learned in the Rotary Academy.  John Swager gave us a fascinating glimpse into his life during his classification talk.

Jeff stated that it is far too easy to consider Iran based upon the simplified “Axis of Evil” speech by former Pres. George W. Bush and the Hostage Crisis that occurred during President Carter’s term. Instead, by considering the nations in the region, as well as the way the youth of Iran appear to be developing, there are reasons to be optimistic about the future of Iran and the United States.

Iran, as with many Middle Eastern countries, has an extensive history of varied cultures, religions, and technical developments. Iran has been cautiously avoiding Western dominance. For instance, many of the roads being built through Iran have been designed to limit the potential for invasion in large regions of the country by external powers.

Iran was considered most relevant as a world power in the 18th century. More recently, Iran’s role was largely dealing with larger powers. Rudyard Kipling’s novel “The Great Game” was set in Iran. As a result of the extravagant personal lifestyle of Mohammad-Reza Pahlavi, the last Shah, Iran was forced to sign many concessions, providing foreigners with monopolistic control of various Iranian industries and markets. One major example of such concessions being the D’Arcy oil concession. In general, many Middle Eastern countries had little bargaining power against Western powers during this period.

Many in Iran have historically seen involvement by foreigners as oppression. Britain was the first Western country that occupied Iran, but following World War II, the United States took over as the primary foreign country involved there. As a result, many in Iran during recent times view the United States as the primary oppressor. The 1953 Iranian coup d’Atat (known in Iran as the 28 Mordad coup) was the overthrow of the democratically elected government of Iran Prime Minister Mohammed Mosaddegh. This coup was orchestrated by the intelligence agencies of the United Kingdom and the United States under the name “The TPAJAX Project.” The coup saw the transition of Mahammed-Reza Shah Pahlavi (Shah of Iran) from a constitutional monarch to an authoritarian one which relied heavily on United States support to hold on to power until he was in turn overthrown in February 1979. Since this time, a lot of Iran’s perception is that the US was taking the British side.

The Shah of Iran was Western educated, and seen as a reformer. He was autocratic, and the internal agency SAVAK rivaled the KGB for brutality, and many political opponents spent time in prison. Through this period, compared to other countries in the region, many in Iran have been educated to high levels.

During the Iran 1979 revolution, led by Ayatollah Khomeini, forces took over the US Embassy and kept hundreds of embassy workers hostage. This 444 day hostage crisis occurred during the Presidency of Jimmy Carter, and the hostages were released soon after Ronald Reagan’s inauguration.

The political structure of Iran is set up along traditional executive, legislative, and judicial lines, but with some modifications. In addition, a general counsel ensures that the laws comply with the Islamic religion. The Revolutionary guard protects the Supreme Leader, and operates with much independence. Iran’s Supreme Leader, originally the Ayatollah Khomeini, is now Mahmoud Ahmadinejad. He is responsible for the general policy and apparatus of members of the judiciary.

Post 9/11, there is new hope for cooperation, but Iran has continued with nuclear weapon development. In 2002, George Bush provided his “Axis of evil” speech, and that message caused the reform elements in Iran to be marginalized. As such, Iran moved to the right politically. Ayatollah Khomenei and much of Iran saw the Axis of Evil speech as extremism.

The US constructed a comprehensive plan to apply pressure to the Islamic system, highlighted by the blockade. This plan can be seen as an imitation of the plan that led to the collapse of the Soviet empire. As such, there is a strong anti-American sentiment overlying the overall relationships of the 2 countries. there is much room for improvement.  The leaders of Iran appear to indicate that threat of force will not sway them. Iran’s nuclear program is seen as the main resistance toward dropping of U.S. sanctions.

There is a strong belief in Iran that their current leadership will implode. Iran’s youth currently is highly educated, and there appears to be strong movement to take Iran on a different course than Iran leaders since the U.S. embassy overthrow have indicated. For instance, the Green Movement refers to a series of actions after the 2009 Iranian election, in which protesters demanded the removal of Mahmoud Ahmadinejad from office. Green was initially used as the symbol of Mir Hossein Mousavi’s campaign, but then became the symbol of unity and hope for those asking for annulment of the election. The current Iran leaders will likely not be able to restrain this reformation movement in the long term.

The economic sanctions applied to Iran have had considerable effect, and yet the economy is not devastated. Iran’s neighbor, Saudi Arabia, has asked the U.S. to protect it from Iran, and Saudi is not the very well liked in the region. As such, though the economies of both the U.S. and Iran could be improved by greater cooperation, the division between the leadership of both countries has at times acted to drive both countries apart with such actions as the Axis of Evil speech, Iran’s nuclear program, and sanctions against Iran. It appears the long term trending in both countries is for normalizing relations.

Chris opened the meeting with the song “A Beautiful Morning”, by the Rascals.

Chris Monger and Paul Chapman announced on August 18 the BBRC family barbecue that will be held at Chris Monger’s home. Please all members RSVP at the BBRC website.

It was great to see Norm Johnson back after his radiation and chemo therapy. Norm remains extremely optimistic, positive, and energetic.

Wendi Fischer used her enthusiastic style and described the benefits of the Rotary Academy, which starts September 19th, and extends over a year. Rotary Academy is the best way for Rotarians to learn about the overall International and National roles and structure of Rotary, the history and purpose of Rotary and Rotary International, and dealing with others in general, etc. The Rotary Academy originated as a great success in our District, and is a great tool to effectively learn the purpose of, and how to navigate within, Rotary.

John Schwager provided his classification talk. While John is one of the few second-generation Seattle natives, with both of his parents being born in Seattle, he has traveled extensively and has contributed significantly to International business and cultural relations by working for such organizations as Boeing and the United Nations.

John graduated from Stanford University, and also gained his MBA degree from Stanford in 1983, and as an electrical engineer traveled to such countries as Czechoslovakia and Russia before the fall of the Iron Curtain. To date, John has visited 64 countries, and has lived in 7 of them.

John went to Ecuador and assisted in electrifying portions of Ecuador, where he met his wife. After joining the UN, during Pres. Carter’s administration, he went to Panama and had a hand in renegotiating the Panama Canal treaty. John was in Kuwait in 1973 before the fall of the Shah of Iran, and has deep knowledge about Middle Eastern culture.

In 1984, John decided to return to Seattle, and put down roots and raised 2 kids. John says Boeing is a wonderful company to work for, and he had an opportunity to travel over the World for Boeing, where he found fascinating political, engineering, job, and religious opportunities. In 2010, he settled down by retiring from Boeing and returned to Seattle, with his family being his new high priority. Even at this point in John’s retirement, it is very easy to get John involved in a discussion about international culture, family, business, aircraft, or engineering considerations.

Tim Johnstone, our new Sergeant at Arms, took the floor to a low key round of Boo’s and hisses.  Noting that prior SAA, Wendi Fischer, had raised more that $3000 during her term, Tim proposed that we could bill Wendi about $3000 for all the fines coming up for all BBRC members in this coming year, and save us all a lot of hassle. Thankfully few BBRC members raised their hands in support of this proposal.

No Foreign Policy – no matter how ingenious – has any chance of success if it is born in the minds of a few and carried in the hearts of none. – Henry Kissinger

Jeff is a recent graduate of the University of Washington, where he focused on Middle Eastern Studies. Prior to attending the UW, he served six years in the Marine Corps with tours in Iraq, Saudi Arabia, and Turkey. He has studied and worked in numerous Middle Eastern countries including Morocco, Iraq, and Saudi Arabia.