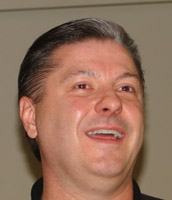 Have you ever wondered when watching a CSI program, how close what you see on TV is to reality? Is the job as exciting as CSI programs portray? What is really required to develop evidence from a Crime Scene Investigation? Here was your chance to find out as Brian Stampfl joined us.  A

rousing introduction was given by Bob Holert.

Sergeant Stampfl confirmed that all CSI officers are incredibly attractive and beautifully garbed at all times, just like on TV!

CSI has 6 full-time detectives and three alternates. They photograph the scene, pick up evidence and do crime scene mappings. They don’t do any of the wild experiments shown on TV like dropping cars from buildings.

Sergeant Stampfl talked about a few incidents that he’s covered including the federal courthouse shooting, the Capitol Hill massacre and the Jewish Federation shooting. They do some work with other cities as well. They helped the City of Lakewood in solving the Adreanna Jackson case. They investigated the Mike Webb homicide and the shooting of Timothy Brenton, a Seattle Police Officer who was killed while sitting in his patrol car. Finally, he was the lead investigator in the Café Racer case in which the wife of Tom Leonides, a BBRC member, was brutally murdered.

The evidence Sergeant Stampfl’s team collects goes to the lab for analysis, unlike on TV where the same officers do the lab work. DNA analysis, in reality, takes 6 – 12 months to get back to the officers and the perp’s picture doesn’t pop up on the computer scene as it does on television. If they have a rush order, which is very rare, DNA analysis can be done in three days.

The crime scenes that you see on TV are always beautiful and well maintained. Sergeant Stampfl said the closest he ever came to that was when a bad guy took a wrong turn at a waterfront house on Mercer Island and rammed a police car trying to escape. The officers shot the bad guy in the thumb.

Sergeant Stampfl walked us through what evidence really is. He showed the bad guy’s car with a severely damaged passenger side window which was caused by . . . . an airbag! The officers were able to show that the airbag deployed first (meaning the bad guy hit the officer’s car) before the shot went through the window. This is important when the case goes to court.

Sergeant Stampfl was thrilled to be able to enter this gorgeous crime scene and check out the house he wanted to see in the first place. He had to recover a bullet from the fireplace inside the beautiful home. Officers have to recover every bullet fired at any crime scene.

Sergeant Stampfl showed crazy photos from scenes he’s investigated including a knife fight in which someone wrote the word REDRUM (murder backward) on a mirror, and a crime involving a mask used in the movie Halloween.

The silliness of the shows (beautiful people, intricate plots, scenic crime scenes) are what make these shows fun.

Rotarian of the Month:

This person has been with the club 8 years, working in the background, and not drawing a lot of attention to his work. He served as treasurer for two years and cleaned up a lot of messes, and created systems that will help the club in the future. He currently serves as assistant treasurer and mentor for our current treasurer, Brad Bauman. Alan Forney is the July Rotarian of the Month.

pretty good about his sales skills, he then tried to sell off Sparkle Dollars or Big Kahuna Dollars or something for $40. He sold a few just prior to launching a new scheme to steal $$ from club members called “Name that Tune”. John DeWater and Tom Smith served as his partners in crime. Typical of the BBRC, there was much confusion and many cat calls. Tom Smith won round one by identifying the song as Summertime in the City by Lovin’ Spoonful. Round two also went to Tom Smith who used a lifeline to identify Summer by Kenny Chesney. FINALLY, DeWater identified the correct song in round three which was a Gershwin tune sung by Ella Fitzgerald. Round four also went to Tom Smith who identified the final song as California Girls by the Beach Boys. And thus ended the longest musical SAA shtick in the history of the BBRC.

Charles Bukowoski: I don’t like jail. They got the wrong kinda bars in there!”

Sergeant Brian Stampfl is the supervisor of the Seattle Police Department’s Crime Scene Investigations Unit (CSI). The CSI Unit is dedicated to the investigation of Major Crimes, including homicides, officer involved shootings, gang violence, sexual assaults, robberies, domestic violence and other complex investigations. The CSI Unit is on call twenty-four hours a day. Sergeant Stampfl began his career in 1991 with the City of San Bernardino in Southern California. He transferred to the Seattle Police Department in 1995 and has held several positions including, Sexual Assault and Child Abuse Detective, Academy Instructor, Field Training Officer and Patrol Officer. He is an adjunct faculty member of Seattle University, where he co-teaches a course entitled, “Medico legal Death Investigation and Crime Scene Investigation.” He is a graduate of the National Forensic Academy in Knoxville, Tennessee and is certified through the International Association for Identification as a Senior Crime Scene Analyst.