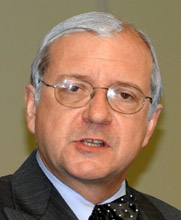 Today’s presentation featured the 33rd president of the United States, Harry Truman in “Making the Tough Decisions” (presented by Mike King). Harry Truman has made many of the most difficult decisions of any President, and yet repetitively came down on the side of what could be reasoned to be making a right choice.  Stewart Martin, a former BBRC member and currently a SeaSide, OR Rotary member, gave his presentation on the difficulties and the realities of implementing a water sanitation system in Africa.  We enjoyed hearing Kentaro Kihara, introduced by Tim Johnstone, a classical piano player and performer from Japan who played a number of lovely piano songs.

Today’s presentation featured the 33rd president of the United States, Harry Truman in “Making the Tough Decisions” (presented by Mike King). Harry Truman has made many of the most difficult decisions of any President, and yet repetitively came down on the side of what could be reasoned to be making a right choice. Harry Truman was known for such common sense, yet everlasting, statements as the strength of the Country is the people who get together to make things better. He walked a path between noting that politicians must be able to make decisions to do good for the country; while also noting that tyrants too easily overcome Democratic rule by making the decisions themselves. So many of these decisions that Presidents make have huge implications even today.

The first of three decisions that Harry Truman faced involved General Douglas Macarthur.  As with describing a mischievous girl, when Douglas Macarthur was good, he was very very good. However, when he was bad, he was horrid.  Likely, General Macarthur did not know the limits of his power.   Harry Truman was aware that the chief of the U.S. military is a civilian, the Commander in Chief or President.   Douglas Macarthur achieved great fame and success during WWII, and felt strongly that a general should be able to do what was necessary to win victory. As such, when the North Koreans initiated their actions against the South Koreans, and Harry Truman assigned Macarthur to deal with the situation, Macarthur pushed the North Koreans far past the original border nearly into China. Thereupon, the Chinese poured across into Korea, and turned Korea into the protracted war we know today. Because Pres. Truman fired Douglas Macarthur, the subsequent campaign against Thomas Dewey became very politicized.

The second decision related to desegregating the armed forces.  WWII and the Cold War were very different.   WWII was a survival war, and if we lost WWII, the entire world would be very different.   By comparison, almost any action on a non-survival war can be questioned.   How history would evaluate the desegregation in the Korea war would depend largely on the success of the war.   If they did well, historians would make the President out to be a hero.   If the war floundered, he could always be questioned. Harry Truman, who originated the statement “the buck stops here”, clearly understood how errors could be easily converted to challenges by political opponents. He commented that today’s Congress, for example, cannot think. Politicians must take short term political risks for long-term political good.

The third decision related to the a-bomb. Harry Truman realized there was a window of opportunity, and who knows what could’ve happened if they do not use the atomic bomb. Likely, WWII could have stretched out for years, or even longer.  American as well as Japanese casualties may have even been higher.   With the dropping of the bomb, the war ended immediately. Of course, to this date, these have been the only two bombs ever dropped on civilians.   Even ignoring the question of whether to drop the bomb, another significant question was how to win the war.   President Roosevelt had run and won on a platform of unconditional surrender, and that’s finally what Harry Truman chose. Perhaps there should have been a more moderate surrender strategy, such as allowing Japan to keep their Emperor.   Harry Truman perhaps failed to think outside the political box in the situation, and he recognized that this might have been his weakness.

Mike King’s presentation of Harry Truman makes us realize that decisions made by World leaders are always a balance between too much power and not acting enough; as well as a Constitutional support of We the People versus the do-it-alone beliefs of the tyrants. While we like to think of those times as simpler, in many ways they were not, and the results of such decisions either haunt us all even today, or make us into a better country. The fact that Harry Truman was one of the more unpopular President during his presidency might be viewed as the result of attacks by political opponents of the day. The fact that Harry Truman is now considered one of the most ethical and popular Presidents years after his administration perhaps reflects that many of these tough decisions that he agonized over were rightfully made.

Today’s musical eye opener is “Do You Believe in Magic” by the Loving Spoonful.

The invocation and pledge was provided by Colin Radford, and Tim Leahy introduced guests and visitors.

Stewart Martin, a former BBRC member and currently a SeaSide, OR, Rotary member, gave his presentation on the difficulties and the realities of implementing a water sanitation system in Africa. There’s no question as to how difficult obtaining drinking water is in Tanzania, where Stuart Miller visited one of the project sites. Many of the drinking supplies that exist are contaminated, and the current filtration techniques involve dumping ashes into the water to remove the visible contaminants. But there are challenges with implementing a water supply system. If the people using the system do not have a proper understanding of the system, or question why it is being provided, it will likely not be accepted. As such, though well-functioning latrine and water-purification systems have been provided over the last years, many of them might be abandoned or neglected. If someone is not taught how to use the system or ensures it keeps working, or even believes the system will be beneficial, then the water purification system will not last long.

As such, when considering implementing a new-system, the group leaders should consider how to extend the longevity of the system. This requires a full understanding of how the system will be used, and the reasons why the users might be improperly using or even abusing the system. Just because things like clean and pure drinking water appear so obvious to us, many others are not accustomed to the same.

We enjoyed hearing Kentaro Kihara, introduced by Tim Johnstone, a classical piano player and performer from Japan who played a number of lovely piano songs. Mr. Kihara has performed for numerous decades, and is available for performances and events. Does anyone have Kentaro’s contact information?

Update on the April 28th BBRC 5K and 10K run/walk. The numbers of participants are climbing similar to last year, though not where they need to be.   BBRC is setting up booths in Bellevue mall over the weekends, and any one who signs up can be written down according to the BBRC signing individuals or teams.   Team captains should become involved and contact your teams. This is one of the top two money makers for BBRC, and provides a very good service.

There is an International Service Banquet and Auction, hosted by the Roteract club, on April 20th from 6-8 at the HUB Lyceum ($20 for students and $25 for non-students). Contact Emily for ticket information at eworrall@uw.edu.

Ann Norman, CPA of Norman & Kitto PLLC, a proud BBRC sponsor, donated 1000 lbs. of fresh produce in the name of our presenter.

Indoors or out, no one relaxes

In April, that month of Wind and Taxes,

The wind will presently disappear;

The taxes last us all the year.