How a Bellevue Company Became the Leader in Online Travel 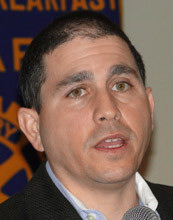 Bob Holert introduced Noah Tratt who is the VP of Media Solutions for Expedia.  Noah’s background is in the hospitality industry and he said that it was very glamorous. He changed sheets, swept floors, cleaned bathrooms and pumped gas, among other things. He said it really inspired him to get an education and get out.  Noah went to work at Microsoft and has been with Expedia for 10 years.  The House Band entertained us with “Scrounge Up a Volunteer Crew” Christine “Bad Teacher” Rose made all her “students” get up and move to new tables with the objective of motivating her reprobates so as to get them to recruit runners, step up their game and support the Bellevue 10K.  Our Rotarian of the month is new member, John Schwager

Bob Holert introduced Noah Tratt who is the VP of Media Solutions for Expedia.

Expedia started at Microsoft and was spun off years ago. Noah’s background is in the hospitality industry and he said that it was very glamorous. He changed sheets, swept floors, cleaned bathrooms and pumped gas, among other things. He said it really inspired him to get an education and get out.

He was an early entrepreneur after buying a transfer press and making t-shirts in his parents garage and selling them on the beaches of Cape Cod.

Noah went to work at Microsoft and has been with Expedia for 10 years. Expedia now owns Hotels.com, Trip Advisors, Hotwire and various other companies.

Expedia is very strong in the US and has recently formed a joint venture with Air Asia which has raised their profile in Asia. Expedia powers the booking capacities of a number of airlines and organizations like AARP.

Expedia has seen tremendous growth. Their gross bookings are over $29 Billion annually. 54 million people go to the Expedia website each month.

The competitive landscape is challenging despite their success. Trip Advisor has now been spun off and competes with Expedia. Booking.com is a formidable competitor as is Kayak.com. Google is a competitor in that their search results now include links to companies where people can book directly. Groupon is competing through their daily deals and travel deals. Facebook even competes because people use it to learn about travel.

Expedia is responding to competition with money. They are investing in improving their technology and improving their web platform. Search results are being presented in a more user friendly way through testing and retesting. Even small changes like new colors and format changes can make a big difference with consumers.

They are also investing in hotel inventory so that they have the hotels consumers want and the rates they need to become loyal customers. This is the largest investment they are making right now.

Merchant model works because people pay when they make the reservation. It’s become clear that in many countries, consumers prefer to pay when they show up at the hotels. They are trying to give consumers the choice in how they pay.

Expedia is trying to tap into a new and huge middle class in Asia and this is a primary focus of their efforts right now. Consumer behavior varies dramatically depending the country and Expedia is responding to that.

Expedia has 9000 employees and Jim Gordon suggested that, if only 10% of them signed up for the Bellevue 10K it would be a very good thing. Go Jim!!

President Chris thanked Noah and told him that, in his name, we are donating 1000 pounds of fresh produce to Rotary First Harvest.

Next week, former POTUS, Harry Truman will be our speaker.

President Chris called the meeting to order after a musical intro “Rock-n-Roll Band.

Invisible guests and visiting Rotarians were introduced by Sayoko. Our exchange student, Wendi, mentioned that she is selling cookies to help fund her Western Safari trip

The House Band whose group goal is to take “N” out of BAND, entertained us with “Scrounge Up a Volunteer Crew” to the tune of “Stuck in the Middle with You”. Visual images of Dustin Walling in his running gear will stick forever with all in attendance this week or last and his promise never to wear them again if we all volunteer to help at the run has spurred a bevy of volunteers. We can still use more volunteers, however, and rumor has it that Dustin has not yet actually called Goodwill to pick up his duds so PLEASE VOLUNTEER!!

Christine “Bad Teacher” Rose made all her “students” get up and move to new tables. Apparently this was meant to motivate her reprobates so as to get them to recruit runners, step up their game and support the Bellevue 10K.

Rotarian of the month and new member, John Schwager, was instrumental in setting up the new member group and recently returned from an international trip to Columbia. Congratulations to John.

Tim Johnstone is a little depressed over “Bad Teacher” who harassed the group in advance of him.

Howard Johnson announced that one week from tomorrow is Rotary First Harvest and he encouraged everyone to participate.

President-elect Scott encouraged everyone to attend the district conference and reminded the group that, if you’ve been in the club for five years or fewer, you will get a $100 credit for conference registration.

Yogi Berra – When you come to fork in the road, take it!

Noah joined Expedia, Inc. in September, 2002 as the head of the car rental business. Under his leadership the car rental business grew faster than any other mature business within Expedia. In June 2006, Mr. Tratt became the Vice President of Supplier Strategy for Expedia Corporate Travel, where he and his team managed the air, hotel and car partnerships of the company. Before Expedia, Mr. Tratt worked for Ensis, LLC where he was a consultant to a variety of early stage startups. Prior to Ensis, Mr. Tratt spent nearly two years at Xylo, Inc. where he worked with HR professionals at leading employers to bring work-life solutions to their employees. Prior to Xylo, Mr. Tratt was a founder of the Daily Rocket, later sold to Fiserv; he also worked for nearly five years as a member of the Excel and Reference teams at Microsoft. Mr. Tratt is a graduate of Brown University.