"What's So Funny about Testicles? How an Embarrassing Conversation Could Save a Guy's Life." 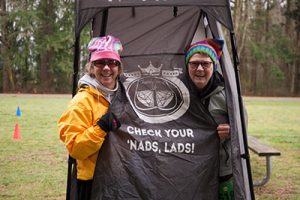 Nancy Balin, Founder and Executive Director of “Family Jewels Foundation”, was our speaker this morning, Friday, September 14. Nancy, a lawyer and previously a Prosecutor with King County, started by telling the story “A Tale of Two Jamesons”.

Nancy’s stepson, Jaimeson Jones had testicular cancer in 2004 at 14 while a ninth-grade student. Being a young man, he did not know what the problem was and was too embarrassed to discuss it with anyone. A cross country runner, he continued to run until he was in too much pain to train. At this point the cancer was advanced (stage 4) but he was able to get treatment and the cancer went into remission. Jaimeson graduated from Bothell High and went to Washington State University where he joined the crew team. Sadly, his cancer returned while a freshman at WSU and this time he was unable to overcome it as his first battle had taken a toll. Jaimeson passed away after 18 months of treatment at 20 on October 7, 2010.

Another Jameson, Jameson Taillon, is a pitcher for the Pittsburgh Pirates. Jameson Taillon at age 25 noticed a problem as one of his testicles had a hard spot. Being a professional athlete and always being careful and in tune with his body, he went to a doctor immediately and found out he had testicular cancer. Getting this diagnosis early, he had one testicle removed and was pitching again 6 weeks later.

Testicular cancer strikes males aged 15 to 44 normally. In the 15 to 24-year male age group, it is the #1 cancer! However, with quick treatment it is easily curable. But it is embarrassing for young men to discuss they have a problem in that area of their body. Young men tend to feel they are invincible but Nancy wants them to understand “they do not want to be embarrassed to death”! With early detection, there is a 95% cure rate! Sadly, 50% do not seek medical help until the cancer has spread.

The keys to avoiding this type of cancer are to get an annual physical, self-check and if you find an abnormality, have it checked immediately. One caution Nancy mentioned – in the annual physical, doctors often do not check for testicular issues so ask them to do so!

“Family Jewel Foundation” fund raisers include the Family Jewels 5K at St. Edward State Park in March, a pop-up Glassybaby booth and a Fall Pub Crawl. More information can be found if you Google “Family-Jewels.org”

Deputy prosecuting attorney Nancy Balin is committed to ensuring justice for her community. Originally from Massachusetts and intent on pursuing her Master’s in Social Work, she instead focused on a law degree and never looked back. She’s been with King County since 1999 and admits that while it can be challenging work, she enjoys it.
It’s her genuine, direct attitude that lends itself so well to her passionate work done outside the office with the Family Jewels Foundation. Since 2011, Nancy and her family have hosted the annual Family Jewels 5k in March in honor of her stepson Jaimeson Jones. Jaimeson died in October 2010 at the age of 20 after two separate battles with testicular cancer. He was first diagnosed at age 14.
The 5k is intended to educate and raise awareness about testicular cancer and its signs and symptoms, as well as fundraise for a scholarship awarded to students whose siblings had cancer. The most common cancer of men ages 15 to 35, testicular cancer is curable 95% of the time when caught early. The 5k uses witty anecdotes (“Nut Notes”) and a direct call to action to inspire supporters, educators and others to participate.