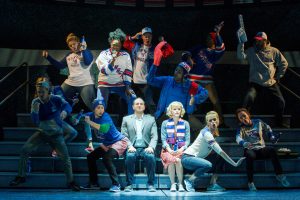 In the lobby of the Village Theatre, Glory Days President Jenny Andrews called our meeting to order. The invocation and pledge were led by Kit Bowerman. Next, Wendi Fischer introduced our guests and visiting Rotarians. Jim Gordon was the host for this morning.

Announcements for this morning included: Robin Callan who reminded everyone our Third Thursday this week (July 18) is at the home of a neighbor of Robin and Gretchen, who have a backyard which is a miniature Bellevue Botanical Garden; Steve Szirmai noted there is a bike ride to Woodinville and then wine tasting at a number of wineries in the Woodinville area (He did not mention if there would be vehicles to drive the bike riders and their bikes home after the wine tasting!); and Adam Mihlstin announced Saturday, July 13 was Rotating First Harvest, where over 20,000 pounds of cherries needed to be packaged.

BBRC member Janell Johnson welcomed everyone and introduced Megan Adams, who wears many hats at the Village Theatre – Individual Giving Manager, dance instructor, dancer, actress to name a few. Megan has been involved with dancing and acting for 40 years and is the daughter of the Founder of the Village Theatre, Robb Hunt.

Megan started with a history of the Village Theatre, which originally started further down Front Street in Issaquah. In 1993, Francis J. Gaudette, CFO of Microsoft, spearheaded a fund drive to expand the theater. Megan shared they have many facilities in the building and another location nearby where they build their sets. Today they also have a location in Everett. which started during the 1998-99 season.

During the tour, we went on stage to get a better feel for what it was like. There Megan pointed out the lighting above the stage and the numbers on the stage (in front) so the performers know where to stand during performances. In the rehearsal room, those same numbers are in front and spaced exactly the same to help the performers familiarize themselves with spacing on stage. In every theatre in the middle of the stage, Megan also explained the ghost light which is in theatres. Located in the middle of the stage by the orchestra pit, this light shows 24 hours a day and exists for both practical and superstitious reasons. The practical reasons are so no one falls into the orchestra pit and can get around without turning on all the lights!

Megan also showed us the rehearsal room, the “lounge areas” complete with showers for performers to use between performances, the sewing/costume room and the wig room. As previously mentioned, the Village Theatre builds its play sets at another Issaquah location. Here they also train interns, often teenagers, in all aspects of set building.

Where do the costumes come from? About a third are made in their sewing room, a third are purchased and a third are borrowed from other theatres. The actors that perform in Village Theatre plays are 95% local but periodically they need to go outside the area for a special talent. The normal contact for a performer with Village Theatre is 3 to 4 months – they have two locations and thus a play will be at both their Issaquah and Everett locations. This is basically double what other local theaters offer so the performers know they will get longer employment. Did you know your average performer in the theater works on average of 4 months a year?

Megan did a wonderful job with her presentation and the tour. The only thing she did not do is dance for us but her credits include playing Annie when she was nine years old and being the choreographer for the SeaGals!

Jenny ended the meeting at 730 with the following Thought for the Day – “Theater is life with the dull bits cut out!” – Alfred Hitchcock

Please note: The Little Mermaid is playing at KIDSTAGE, Village Theatre from July 26 to August 4. You can order tickets at www.villagetheatre.org.

Megan Adams has been involved with the performing arts for close to 40 years as a performer, choreographer, teacher, and development professional. Some of her most exciting “Resume Highlights” include: hosting for MTV and Comcast’s “Home in on It”; choreographing for Village Theatre and the SeaGals; working at KOMO TV and the Bill Nye show; and raising money for Youth Education Arts programs that benefit close to 57,000 youth in our region. Megan is honored to be a part of a team that brings joy and enlightenment to thousands of families across the region through Village Theatre’s Mainstage productions, Village Originals, and Youth Education Programs.