Bob Holert introduced the guest speaker, Tony Castricone, Director of Broadcasting for IMG Sports Marketing/University of Washington. Tony is the new voice of the Huskies for Basketball and Football replacing the retired Bob Rondeau.

Tony spoke of the journey and struggle to get this job. He grew up in Columbus Ohio, admiring the Ohio State Buckeyes.  He was very much into sports and dreamed of being a pro athlete.  He had a huge passion for sports, especially talking about sports.  He went to Ohio University and studied Journalism, with the hope of someday being a sports broadcaster. He got a job right out of College in radio in his home town doing 60 second sport updates.  After 5 years, Tony got laid off (in 2010) due to the economic downturn.  At that point Tony decided to travel the country by car and remembers visiting Seattle, where he was impressed by the city.

He always wanted a job doing “play by play broadcasting”. IMG offered him a part time job in North Carolina, their broadcast center, and later moved him into a full-time role.  He was finally doing what he wanted to do but he also needed to work other odd jobs to make ends meet.  One of his side gigs was high school sports broadcasting.  Tony kept his focus and continued to work hard.  He was then hired to be Bob Rondeau’s producer for University of Washington Husky broadcasts at IMG Sports.  He had no idea that 7 years later Bob would retire and he would get his current job.  Bob had the job for 37 years so Tony knew it was a big commitment.  He is now 15 months into a new marriage, and a new job living in Seattle.  He is blessed to be with his wife and working at the U of W.

Tony then answered a few questions from the audience. One important question was would he be rooting for Ohio State or Washington in the Rose Bowl.  He said that there is no question he is a DAWG!

President Chris shared the donation of 1,000 pounds of fresh produce to Rotary First Harvest in Tony’s name. He then closed with the tought of the day – the remembrance of Pearl Harbor!

John Cherry opened the meeting with a prayer and the Pledge of Allegiance. Girish Bhatia introduced guests, including students from Bellevue Christian School and the BCS Student of the Month.

Larry May introduced Grace Hinz, the December Student of the Month from Bellevue Christian. Grace is active in cross country, skiing and traveling.  She recently took a trip to Bangladesh.

Brian Evison then made an announcement about the Christmas Eve (December 24) morning golf event at Mt Si Golf course. Contact Brian if you want to play! Also, there was an announcement for the golf event on July 22, 2019 at Bear Creek, a joint venture with Northwest Center.

President Chris announced the “Birthday Minute” and we sang Happy Birthday to Kim Shrader. Chris then reiterated that next week is the last week for giving tree gifts. Kit Bowerman reminded us of the upcoming hockey game on Saturday December 15th and to let him know ASAP if you plan on attending and need tickets.

Colleen Turner, Sargent of Arms for the day played a fun game, 3 Truths and 1 Lie with the audience. We now know much more about John Smokey!

Scott Sadler shared that we so far have 72 donors to the Rotary Foundation. John Martinka spoke of the great success we have had with the All in For Autism sponsorship. We have raised $49,000 so far.

There was also an announcement made about the upcoming Christmas Party on December 21st.  Please RSVP to Carmela the number of guests you will bring.  Santa Claus will be there along with Carolers! 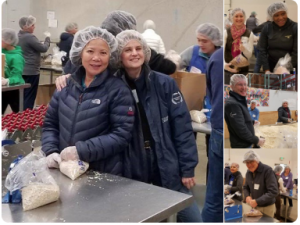 Bellevue Breakfast Rotary Club members and their guests outdid themselves at Rotary First Harvest – a program of Rotary District 5030 this morning. We had over 30 people working on oats and beans. Thank you to John Smolke and his team at Peterson Sullivan, the Forest Ridge Interact Club, Kaj & Clare Pedersen, Adam Mihlstin, Howard Johnson, Colin Radford, Andrew Face and his daughter Quincy, Eli Enger and his fiancée, Brittany Powell and Colleen Turner.

Our Annual Holiday Breakfast is just around the corner!!

Our Family Fun Breakfast is Friday, December 21st. This is the last BBRC gathering before the Holiday Break.

Bring your loved ones to share in BBRC Fellowship Fun and the Joy of the Holiday Season. We will have fun holiday food, activities for the children, special holiday entertainment and maybe even a surprise guest!

Please RSVP with how many guests so we know how much extra food to have on hand! Rotarians and the 1st guest are complimentary. Each additional adult is $20 and children are $10. No need to pay online, we will collect at the door.

Want to join the Hockey Outing? Let us know!!

Come join the BBRC Saturday, December 15, as we watch the Everett Silvertips take on their arch-rival Seattle Thunderbirds at Angel of the Winds Arena (Everett) at 7:05 pm. Tickets will cost $18.00. For the kids, this night is the “teddy bear” toss. Please notify Kit Bowerman at (425)830-0328, or e-mail at bowvet@comcast.net as to how many tickets you want. See you there, eh?