"The Seattle U Athletics Experience: Developing Champions for the World" 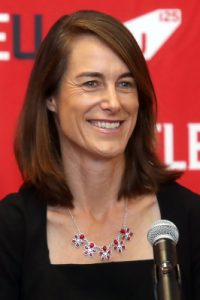 We kicked off the meeting with an announcement to the members to read the thank you notes from the At Work students who came to our club for interview training earlier in the Rotary Year.  These were located on the tables for our members to read and share.  Neil Brevick kicked off the meeting with the vocational thought and pledge.  Francine Weaver introduced our guests this morning, which included our District Governor-Elect, Alan Merry, who was visiting our club.

Tanya Franzen-Garrett introduced our Student of the Month, who was Huy Nguyen from Sammamish High School.  Huy addressed our club, where we learned that his family originated from Vietnam and that he was first member of his family who will be attending UW Bothell to study Computer Science.  In terms of service, Huy volunteers his time with WorldVision, where he works within their warehouse to pack teacher supplies that are used in the local schools.  We wish Huy tremendous success in his ongoing journey.

Dennis Newell, John Schwager and Wendi Fischer took the stage to update the club on the work of our Retreat from last weekend.  Dennis captured the mood of the event by showing a number of pictures of our attending members who were playing golf, enjoying wine tasting, fellowship over dinner and having fun with the games at Icicle Village Resort in Leavenworth.  There were also pictures of the Retreat participants working hard on the plans for Chris Boland’s presidency in Rotary Year 2018-19!  John Schwager quickly reviewed the feedback from the participants’ survey (80% responded), which was overwhelmingly positive with respect to the experience, location and work undertaken.  Wendi Fischer then had the club members

present participate in one of the Retreat activities to demonstrate how we all came together around common goals in our pursuit of Service Above Self – we may have our differences, but in Rotary we are bound by very strong bonds of fellowship, service and making a difference.  This section of the meeting ended with President Kaj Pedersen reminding members that the Retreat is now enshrined in the bylaws of the Club – it is now the responsibility of the President-Elect Nominee Designate to organize our annual Retreat.  This will allow us to keep the Retreat alive in our club’s activities.

contest between Adam Mihlstin and the winner, because Adam attended the Retreat on his wife’s Birthday!  However, this month’s winner was Dennis Newell for his work in resurrecting and leadership in organizing the Retreat this year.  Dennis graciously accepted the recognition and acknowledge that this was for the team involved with making the event happen.

Carmela Ramaglia led us into a skit to promote the upcoming Rotating of the Wheels event (June 30th) to celebrate the passing of the Presidential torch from Kaj Pedersen to Chris Boland.  The theme was a game show to

help promote the event’s theme – a Highland Fling!  Thanks to Adam Mihlstin and Dennis Newell for being our contestants; an event that Adam won with the result that half the club handed over a dollar for Dennis’s loss!  Thanks to Rick and John for acting as our accounting and lawyer to make sure the proceedings were all fair and square.  Carmela did a wonderful job of linking Scottish heritage to our local area, members and the event – a fun moment this morning that had a lot of banter from the usual irreverent audience.

Bob Holert introduced our speaker, Shaney Fink, the Athletic Director from Seattle University who spoke to us about her approach to leadership at the university.  Shaney spoke to us about her journey into sports as a result of her competitive nature, family upbringing and discipline in measuring results.  As a result of her Jesuit education, she developed leadership philosophies that she applies in her work today: these include self-awareness, ingenuity (finding a way to win when there appears to be none), leading with love and learning from failure.  Shaney also helped us learn more about Seattle University’s sports program and personalities with the aid of questions and swag. Clearly, this had our attention as well.

Kaj Pedersen ended the meeting with last minute announcements and ended with the following anonymous thought: “Victory or defeat is not determined at the moment of crisis, but rather in the long and unspectacular period of preparation.”

Shaney Fink was announced as the new Director of Athletics of Seattle U effective November 1, 2016. She was previously at the University of San Diego, a private Catholic university, where she was serving as Senior Associate Athletics Director and Senior Woman Administrator. Her full tenure at USD spanned more than 17 years and included previous roles in compliance and student services, academic support and as an assistant volleyball coach for the Toreros.
I am honored and thrilled to join Seattle University as its new Director of Athletics,” Fink said. “I am grateful for the support of President Sundborg, the Trustees, Executive Vice President Tim Leary, Vice President and search committee chair Mary Petersen and all those who were involved in the process. I am looking forward to building on the foundation of success at Seattle U and engaging the entire community, to work together to fulfill the bold vision for Seattle University Athletics.”
At USD, Fink was responsible for day-to-day operations and management of 17 NCAA Division I teams and 450 student-athletes. She was a key point person for many leadership, strategic planning, inclusion and fundraising initiatives during her USD tenure. She held oversight responsibility for a development team and assisted in development and management of a $20+ million Athletics Department budget.
At USD, Fink founded and chaired the Torero Athletics Council, a grassroots effort to facilitate communication between faculty and members of the athletics department. She also created both the 2008-14 and 2015-17 USD Athletics Gender Equity Plans, going on to serve as chair of the Gender Equity, Diversity and Student-Athlete Welfare Committee.
Fink served as the West Coast Conference representative on the NCAA Legislative Council and the Pioneer Football League representative on the NCAA Legislative Council Football Championship Series Subcommittee from 2011 to 2015.
A graduate of the Women Leaders in College Sports (formerly NACWAA) Executive Institute, Fink participated in the NCAA Pathways program after completing the 2015 NACWAA Executive Institute in Kansas City in 2015. In 2013 she was named NCAA Division I FCS Administrator of the Year by NACWAA.
During the 1999 season Fink assisted the Torero volleyball coaching staff, helping USD to a 23-6 record and second round finish in the NCAA Tournament. Prior to USD she gained coaching experience at the high school, college (Colgate University) and international levels. Upon completion of her collegiate volleyball career at University of California at Berkeley, Fink competed professionally in beach and indoor volleyball, domestically and internationally.
Fink earned her B.A. in Social Science from Berkeley and her Master's Degree at USD in Counseling. Shaney and her husband, Tom Vorkoper, have three children - Lucas, Mia and Leon.