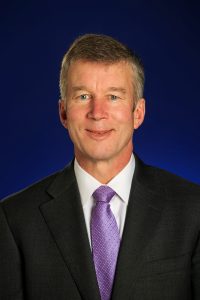 We kicked off the meeting with high-fives after our club President announced that we had secured the Presidential Citation for our club’s work this Rotary year.  Congratulations to everyone in the club for making their contributions toward this achievement.

Chuck Kimbrough led the invocation and pledge this morning and this was followed up Wendi Fischer introducing our guest this morning.  We had some fifteen guests this morning, which included our Forest Ridge Interact group.

We kicked off with Clint Merriman being called up to replace his Red badge now that he has completed his tasks on the way to full membership, which allows him to secure his Blue badge.  Our congratulations to Clint for making the transition happen so quickly and we continue to look forward to his engagement with our club.

Kaj Pedersen provided the club membership with an update about our District conference that happened last weekend.  He thanked Ann Norman and Caitlin Devaney for the participation as well.  This year the conference was focused on New Generations, including the speaking programs being led Rotaractors – it was great to feel the energy and passion come through with the young leaders participation this year.  We also had a hands on service project to pack personal care kits for Puerto Rico and women who were freed out of being sex trafficked.  The goal was to pack 400 in an hour and with the support of all the Rotarians at the district conference, we were able to pack 800 in around 40 minutes – amazing!

Chris Boland came up to provide us with a quick update on the All in for Autism 5K/10K Walk/Run – the weather came through for us with the result that we had 1600 participants on the day.  Chris thanked everyone involved with the organization of the event, especially for all the hard work that was involved in bringing the event together.  Our thanks to Chris for helping to lead the charge for our main fundraising event this year.

Our Interact team from Forest Ridge, who provide some 40 volunteers to the support the event, came up to be recognized for their leadership and involvement with Rotary this year.  Laura Coascchi update our members on the Interact and provided the young ladies with gifts for their service this Rotary year.  We also had the opportunity to hear from Franny, who spoke on behalf of the group to our members.  We are thrilled that they were able to join us for the meeting this morning and for their support of the Rotary cause.

We finished the club program with our SAA, Curtis Cummings, getting our members involved with a baseball trivia quiz.  We had five questions to answer and it took a wee while for us to get through them as we had the usual high jinx from our members in their responses – a great moment of hilarity.  Thanks Curtis for keeping the moment fresh.

who started off with some personal anecdotes about his experience within the Mariners and baseball.  Kevin was able to provide us with his personal observations related to the Mariners and this season, while also providing us with some updates from within the club – including the real story behind the retirement of Ichiro.

Kaj Pedersen closed of the meeting by thanking our speaker and visiting guests, before finishing with a quote from Joaquin Andujar (St. Louis Cardinals): “You can sum up the game of baseball in one phrase: ‘You never know.'”

Kevin Mather was promoted to President & Chief Executive Officer of the Seattle Mariners on Nov. 9, 2017. He had served as the Mariners President and Chief Operating Officer since Feb. 1, 2014. The Mariners Executive Vice Presidents and Sr. Vice Presidents report to Mather and form the senior leadership team for the organization.

Kevin has participated on a variety of Major League Baseball committees over the years. His committee appointments currently include Revenue Sharing Definitions Committee and the Audit Committee. During his career with the Mariners, Mather has served or worked closely with executives on Long-Term Strategic Planning, Finance, Investments and Insurance Committees.

Prior to the Mariners, Mather worked for the Minnesota Twins from 1989-1996 where he served as Director and then Vice President of Finance. Before his career in baseball, Mather was with the Certified Public Accounting firm of Deloitte, Haskins & Sells for four years, and The Pohlad Companies of Minneapolis for one year.

Mather grew up listening to Bob Uecker as a Milwaukee Brewers fan in Madison, Wisconsin. He is a 1984 graduate of the University of Wisconsin where he received his B.A. degree in accounting and risk/insurance. He is on the Executive Board of Junior Achievement of Washington. His hobbies include his family, golf and his two dogs.

He and his wife Shannon live in Issaquah and have three grown sons: J.P., David and Steven and two dogs, Dutch and Augustus.