"The Magic of Writing" 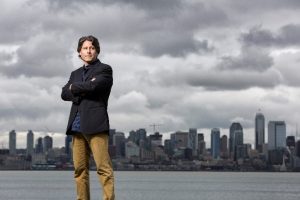 Robert “Bob” Dugoni gave up his law practice and partnership status with a San Francisco law firm to move to the Pacific Northwest (Bridle Trails area) and fulfill his dream to write. I first met him during his book tour for his third book. He has spoken to BBRC twice before, first when he was a fledgling author and then a couple years after he became an author in partnership with Amazon, about 5 years ago!. Today Bob will discuss a subject in which he is an expert, as his background as an author and an evangelist for writing will attest! Bob is a great story teller and this is a program you will not want to miss!

Robert Dugoni is the critically acclaimed New York Times, Wall Street Journal, Washington Post and #1 Amazon bestselling author of the Tracy Crosswhite police series set in Seattle, which has sold more than 6 million books worldwide. He is also the author of The Charles Jenkins espionage series, and the David Sloane legal thriller series. He is also the author of several stand-alone novels including The 7th Canon, Damage Control, and the literary novel, The Extraordinary Life of Sam Hell - Suspense Magazine’s 2018 Book of the Year, for which Dugoni’s narration won an AudioFile Earphones Award; as well as the nonfiction exposé The Cyanide Canary, a Washington Post Best Book of the Year. Several of his novels have been optioned for movies and television series. Dugoni is the recipient of the Nancy Pearl Award for Fiction and a two-time winner of the Friends of Mystery Spotted Owl Award for best novel set in the Pacific Northwest. He is also a two-time finalist for the International Thriller Award, the Harper Lee Prize for Legal Fiction, the Silver Falchion Award for mystery, and the Mystery Writers of America Edgar Award.

Robert Dugoni’s books are sold in more than twenty-five countries and have been translated into more than two dozen languages.