"The Role of Soccer in UW Athletics" 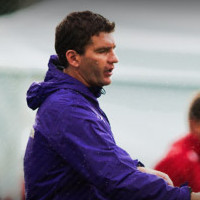 Jamie Clark began his presentation with a trip down memory lane to Zimbabwe, where he and his family lived in 1984 and 1985 while his dad, Bobby Clark, was 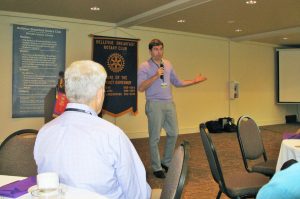 coaching the Highlanders soccer team.  He thanked Rotary for helping his brother, Tommy, return to Zimbabwe 11 years later to coach soccer, which was a life-changing experience.  When Tommy returned to Zimbabwe, he was shocked to learn that 25% of the kids he knew had passed away from diseases like HIV, which moved him to ultimately change his major from English and become a physician.

Jamie was amusing when he kiddingly told us the role of the Washington Husky men’s soccer team was to spend a fraction of the money that is generated from football.   In reality, his mission is to produce a team that the region can be proud of and youth can aspire to.

Jamie’s role model is his Scottish father, who played in three World Cups and is now the head coach of the University of Notre Dame men’s soccer team.   Since his parents believed education was important, they insisted Jamie graduate from college before becoming a pro soccer player.   He graduated from Stanford in 1999.

Jamie’s goal is to maximize potential with growth.  He believes the best thing that could happen to a team is winning and the worst thing is not learning.  As a coach, it is important to understand talents and as a player, you need to appreciate what you’re good at.

As a coach, Jamie wants to produce men with character who want to give back to the community.  He hopes the community will better support UW athletic teams that aren’t football or basketball.  The soccer season starts with UW playing Gonzaga on August 28.

Paul Chapman called the meeting to order at 7:30am.

Carmela Ramaglia gave the following invocation, which was excerpted from The Invitation, by Oriah Mountain Dreamer:

It doesn’t interest me what you do for a living. I want to know what you ache for and if you dare to dream of meeting your heart’s longing.

It doesn’t interest me how old you are. I want to know if you will risk looking like a fool for love, for your dream, for the adventure of being alive.

I want to know if you can see Beauty even when it is not pretty every day. And if you can source your own life from its presence.

It doesn’t interest me to know where you live or how much money you have. I want to know if you can get up after the night of grief and despair, weary and bruised to the bone and do what needs to be done to feed the children.

I want to know if you can be alone with yourself and if you truly like the company you keep in the empty moments.

Alex is a dual American-Swiss citizen and has an international family.   Her mother works for the World Health Organization in Cairo, her father lives in Miami and travels all over, one brother lives in 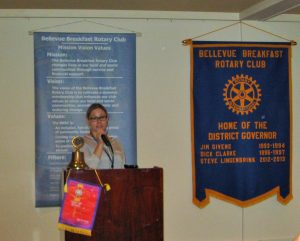 the Congo and another travels back and forth between New York and London.

Her commitment to serving others began in high school, when she traveled to Tanzania to help build schools.   Alex commented that the Tanzanians were some of the happiest people she had ever met even though they were very poor.

Alex has been in the special education field for the past 13 years and now works at Northwest Behavioral Associates where she wears many hats, including working with autistic children and fundraising.

Kara and Caroline created a fun PowerPoint presentation displaying photos of them in France and Washington.  Kara noted the architecture is different in France, families always eat together, dinner is much later and people are better dressed.

Ann Norman and Chris Boland promoted BBRC logo wear that can be ordered from Chris’s company, MerCom.   You can order a dress shirt, polo or vest and proudly announce to the world that you’re a BBRC member. Contact Chris for more information at 425-503-3804 or chrisb@mercom.biz.

“If you’re in the penalty area and aren’t quite sure what to do with the ball, stick it in the net and we’ll discuss your options afterwards!” ~ Bill Shankly

Jamie Clark has been on a soccer field since before he could walk, and on it seven days a week after that. The son of former Scottish League player and now worldwide coach Bobby Clark has followed his dad from Scotland to Zimbabwe - where his family was accepted into the local Matabele culture - to New Zealand to America. Jamie became Stanford's first All-American while playing for his father, then played professionally in Major League Soccer.
Yet the man who raised the Huskies' men's soccer coach never imagined his youngest of three children would be what he has become: A colleague, a fellow leader of a major college program.
"I never really thought about him as a coach," Bobby Clark, Notre Dame's esteemed leader and veteran of the profession, told me.
His hearty laugh and an even heartier Scottish accent bellowed through the phone from South Bend, Ind.

"He was always very much a coach on the field when he played," the elder Clark said of his son. "But we never talked about it as a career path. He just kind of fell into it."

Now his son has fallen into the most vibrant soccer community in the United States. He's the leader of UW's tradition-filled program, and turned a Huskies team that uncharacteristically missed four consecutive NCAA tournaments before his arrival into one of the top programs in the country. The Dawgs have now made three-straight NCAA Tournaments, including an Elite Eight and Sweet 16 run, while also achieving a No. 1 National Ranking in 2014.

Chatty, engaging Jamie Clark is the new bridge between Washington's remarkably deep and talented youth programs and the ultra-successful and rabidly followed Seattle Sounders of MLS.
"It's already a huge benefit, because people care about soccer in Seattle. It's the best soccer city in the country," Clark said. "There's a passion. For our present team, there is inspiration to be drawn from, right in front of them.
"From a recruiting perspective, this is the best city to play in. The Sounders are an interested group. They come watch games. That's a party that cares about U-Dub soccer. You know, they want to know players. It's nice to know that they want to put us in a spotlight."

Jamie, who was a first-time head coach at Harvard in 2008 and '09 before leading Creighton in 2010, really did fall into dad's coaching path.
After two disappointing and injury-filled seasons playing in the pros, Jamie was out of MLS and seeking to start a life outside soccer. In 2002, he moved to Albuquerque. That's where his older brother by three years, Tommy (now the head of Grassroots Soccer, an organization that teaches soccer and tries to prevent the spread of HIV in sub-Saharan Africa), was completing his residency in pediatrics at the University of New Mexico. Jamie was there to help his brother begin a website.
Jeremy Fishbein had just been hired to take over men's soccer at New Mexico. When he found out a former Stanford All-American, NCAA finalist and MLS player was in town, he asked Jamie to be his assistant with the Lobos.
So much for that website.
Fishbein and Clark led New Mexico to unprecedented successes, including a run to the 2005 national championship match. Four players were drafted into MLS while Clark was at UNM, and three of the four teams Clark worked with advanced to the NCAA Tournament. The Lobos were 61-16-8 in four seasons Clark assisted them.
Then Dad called from Notre Dame with an opening.
"They told me this Clark kid could do quite well coaching," Bobby joked to me. "So I said, `Why not?'"
Notre Dame reached the quarterfinals of the NCAA Tournament in both of the seasons the Clarks were together in South Bend, going 29-11-7. Together they developed Joseph Lapira into the 2006 MAC Hermann Trophy winner and Soccer America Player of the Year. Additionally, two Fighting Irish players were named to the NSCAA Scholar All-America team.
Then Harvard called to make Jamie a first-time head coach. That's when he learned the same thing his father did decades earlier when he arrived in America.
"It sometimes takes playing at the next level to realize that the next step isn't a better step always. It's a higher level of competition. But as a whole environment goes, I don't think there is a better environment (than college soccer)," Clark says.
"If we create Washington to be the best in the country, they won't ever play on a better or more fun team."
To Clark, that's not as far off as it might seem. He looks around UW and sees limitless potential. He sees the success of the Sounders. He sees Sounders players, coaches and staff alongside UW alums at Huskies practices and games, actively involved in the program. And he sees one of the most fertile developmental grounds in the nation inside his new home state.
I asked him how fortunate he felt he was, already an NCAA tournament head coach at such a young age.
"The thing with all young coaches is there's one usually striking similarity: If you are a successful young coach, you haven't had a long, successful pro playing career," he said, chuckling.