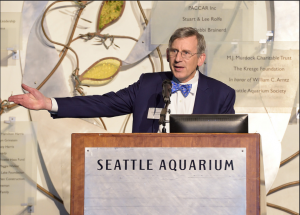 President Chris Boland opened the meeting, followed by Carmela Ramaglia who recognized and honored Father’s Day and led the pledge of allegiance to our flag. Steve Goldfarb introduced visiting Rotarians and guests. Among our guests were Sammamish High students receiving scholarship money from BBRC, their families and 3 counselors from Sammamish High. In addition, we had a number of our AI4A Walk/Run sponsors attending the meeting. These sponsors included Acme Foods and The Bellevue Collection. Jim Gordon gave us a short history of National Flag Day, which is celebrated on this date June 14!

And we have a new full-fledged BBRC member, turning his red badge in for blue – Rich Martin! Rich is already heavily involved with BBRC activities and a real asset to BBRC!

Bob Donegan, President of Ivar’s was here to discuss the new Seattle seawall, the tunnel project with Big Bertha, demolition of the viaduct and build-out of the Waterfront Park. Bob was also part of the committee that has worked on the planning, design and completion of these projects!

The initial Seattle seawall was built between 1914 and 1933. The design at the time was not conducive to helping fish and the environment. Bob explained the previous construction and the challenge faced as well as the redesign and rebuild of the seawall. The new seawall has been designed so salmon can swim through the water underneath it as it is lit. Previously the darkness under the seawall and piers scared fish as predators for them lurk in the dark. Therefore, they would not swim through that area but go beyond the piers where the water was lighter (and more dangerous). In addition, Spring Street was named because there are 3 springs beneath it. It was necessary to keep that moisture out of the construction area during construction and that was done.

The tunnel and viaduct project was originally scheduled to be completed by Memorial Day, 2019. Instead, it is behind schedule and will not be completed until October 2019. This is really hard on existing waterfront businesses as over half their revenue comes from the 3 summer months, June thru August.

The designer of the Waterfront Park, James Corner, also did the High Line in New York and numerous other park infrastructure projects around the country. He is practical and did a great job in the design. There will be a bridge from the Pike Place Market to the waterfront. There will be a significant expansion of the Seattle Aquarium Ocean Pavilion.

Issues that needed to be faced. The amount of parking is minimal but there is a Waterfront shuttle service that helps alleviate this and seems to be well received. In addition, the Waterfront Park is not managed by the City of Seattle but by a non-profit and thus it will not have the problems our parks are having. Using a non-profit for high-end parks is commonplace around the country.

Bob Donegan admitted this construction for years along the waterfront has been very difficult financially for existing businesses. They are looking forward to final completion so they can do business as usual.

Bob Donegan has been the President of Ivar's Inc. since September 2001. Bob started with Ivar's in 1997, leading the chain's has growth from 45 to 61 units. He previously served as Chief Financial Officer of Ivar's from 1997 to 2001. Prior to joining Ivar's, Bob was the Chief Financial Officer, Executive Vice President of Planning and Development for Peet's Coffee and Tea from 1994 to 1998, helping grow the store count from 19 to 31 units. Bob has been a Director of Cost-u-less, Inc. since June 2004 and a Member of the Economic Advisory Council at Federal Reserve Bank of San Francisco since June 2017. He has served as a Director of Umpqua Holdings Corporation and Umpqua Bank, a Director at Sterling Financial Corp. a Director of Ivar's Inc., and a Director of Golf Savings Bank. He was Board Chair of the Seattle Metropolitan Chamber of Commerce from 2012 to October 2013. He is a board member of the Seattle Aquarium, the Chief Seattle Council of the Boy Scouts, the Seattle Historic Waterfront Association and the Seattle Sports Commission. Bob earned undergraduate degrees in economics and journalism from the University of Wisconsin and his master's degree in Public and Private Management from the Yale School of Management.