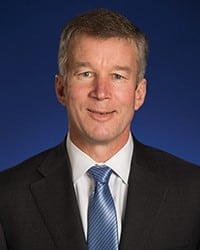 There are still questions about the 2021 season for Major League Baseball and the Seattle Mariners. Will there be fans at the games? Only time will tell but there will be a season – even if it is delayed!

This morning Kevin Mather will discuss the youth movement of the Seattle Mariner baseball team. The January 2021 cover of Baseball America states “Julio Rodriguez leads the Mariners’ vastly improved farm system as he powers his way to Seattle!” Here is your chance to hear the future of the Seattle Mariners and players like Julio Rodriguez, Evan White, Kyle Lewis as well as other young prospects. This is a meeting you will not want to miss1

Kevin Mather was promoted to President & Chief Executive Officer of the Seattle Mariners on Nov. 9, 2017. He had served as the Mariners President and Chief Operating Officer since Feb. 1, 2014. The Mariners Executive Vice Presidents and Sr. Vice Presidents report to Mather and form the senior leadership team for the organization.
Mather joined the Mariners in 1996 as the Vice President of Finance and Administration. He was promoted to Executive Vice President of Finance and Ballpark Operations in 1999. Kevin has participated on a variety of Major League Baseball committees over the years. His committee appointment currently involves the Revenue Sharing Definitions Committee.
Prior to the Mariners, Mather worked for the Minnesota Twins from 1989-1996 where he served as Director and then Vice President of Finance. Before his career in baseball, Mather was with the Certified Public Accounting firm of Deloitte, Haskins & Sells for four years, and The Pohlad Companies of Minneapolis for one year. Mather grew up listening to Bob Uecker as a Milwaukee Brewers fan in Madison, Wisconsin. He is a 1984 graduate of the University of Wisconsin where he received his B.B.A. degree in accounting and risk/insurance.
He is on the Executive Board of Junior Achievement of Washington. He is also treasurer on the Seattle Children's Foundation Board of Trustees. His hobbies include his family, golf and his two dogs.
He and his wife Shannon live in Sammamish and have three grown sons: J.P. (wife: Christy), David and Steven and two dogs, Dutch and Augustus.