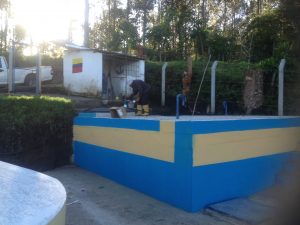 Howard Johnson then gave a brief review of the $8 million donation his Lutheran Church made to charities and faith communities on the Eastside. Grace Lutheran Church in Bellevue over the years lost membership and recently they realized they could not sustain the church over time. They thus made the choice to sell the property and donate the proceeds to Eastside charities. The largest amount went to support homelessness. Congregations for the Homeless and The Sophia Way, which operate Eastside shelters, each got $1 million, as did Imagine Housing, an Eastside affordable housing developer.

Next there were many Happy Bucks proclamations, including Neil Bretvick, John Cherry and Chuck Barnes.

John Schwager introduced our speaker, Marcia Almquist who was visiting from Ecuador. Born in Mexico City and a Seattle native for 43 years, Marcia moved to Ecuador and has been heavily involved with her Rotary Club Los Chillios Milenio in Sangolqui, Ecuador. Her club was started in 2007 and has 26 members.  They have been involved with 30 projects, totaling an expenditure of close to $750,000. Marcia shared that all the clubs (62 clubs with 1260 members) in Ecuador are involved with water related projects – watersheds, health and clean water for sanitation and economic development.

Marcia described the current active projects her club is involved with – two for increased storage and capture of water (larger storage tanks and, pumps, etc.), a pipeline to move water and purification and installation for 3 communities. The communities work actively with the Rotary members on these projects.

The club has also done a Dental Clinic office in the Amazon Basin, provided medical equipment and set up a Senior Center with exercise equipment and materials to teach a healthy lifestyle. In addition, her club is involved with helping women in the more rural areas with skill training (culinary school, baking, agriculture practices), financial management and self-esteem. They have raised $69,000 for a Microcredit program.

At the end of her presentation, Marcia was given a card stating  $1000 pounds of fresh produce have been donated on her behalf to Rotary First Harvest thanks to a donation by the Kaj Pedersen family.

Chuck Barnes next introduced his Board from his BBRC President Rotary year, 1998-99. Many were in attendance – Cary Kopczynski, Margie Burnett, Steve Peters, Stewart Martin, Sharon Edberg, Jim Zidar. Past President Barnes adjourned the meeting at 830 AM.

Marcia Almquist was raised in Mexico City, but lived with her husband in Seattle for 43 years after serving in the Peace Corps in Bolivia. Her work in Seattle included developing and managing low income housing in downtown Seattle with Plymouth Housing Group and Seattle Housing Resources Group (now Bellweather Housing), and developing the home for Casa Latina, a non-profit organization providing economic and education opportunities for Latino immigrants. She and her husband retired to Ecuador in 2012, joined Rotary, and have successfully completed several global grants in her new community.