"Programs and Services in 2020 for USO Northwest" 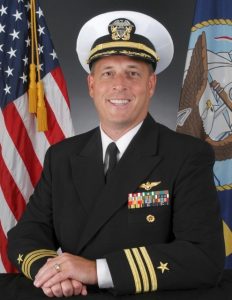 Time: The Zoom session will open at 7:15am for members to socialize . The meeting will start a 7:30am sharp, so please connect a few minutes before the meeting so we can all be together for the Inspirational Moment and Pledge.

Note: For security reasons the Zoom link will no longer be posted on the club website. You will receive an email with the Zoom link tomorrow, Thursday. Please contact Club Administrator Kim Dreiblatt (clubadmin@bbrc.net or text 425-444-7906) if you are unable to find the email containing the link or would like to join us as a guest.

With Memorial Day on Monday May 25, today we will not only thank our veterans and those who serve but also catch up on a mainstay for service people around the Puget Sound area as they disembark to and from new assignments. Our guest speaker, Commander Don Leingang of USO Northwest, will discuss USO Programs and how they are remaining relevant and continuing to support our service members during COVID-19.

Commander Don Leingang was raised in Tacoma, Washington. He graduated from Oregon State University in 1984, where he received a Bachelor of Science degree in Business Management. He was commissioned an Ensign through the Navy ROTC program in June 1984 and reported to Pensacola for flight school training in September.

His 24-year Naval Career included 2 flying tours with Helicopter Combat Support Squadron ELEVEN (HC-11) in San Diego, as well as other operational tours at the Naval Academy, Commander Carrier Group ONE, the Pentagon and as Commanding Officer of Navy Recruiting District Seattle. After Commander Leingang earned his Master of Arts Degree in National Security and Strategic Studies from the Naval War College in Newport, Rhode Island, he reported onboard Naval Station Everett as Executive Officer in June 2006 with immediate duties organizing Seattle Seafair. Commander Leingang served as the Executive Officer of Naval Station Everett until his retirement from the Navy on 1 July 2008. He currently serves as the Executive Director of USO Northwest. Commander Leingang is a lifetime member of both the American Legion and Veteran of Foreign Wars.