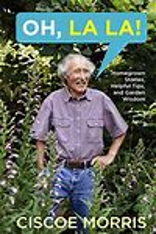 Link to recording of Zoom meeting. Click on full screen to remove Chat box on right side of screen. Ciscoe Program Zoom recording

Our speaker today was Ciscoe Morris, our local gardener extraordinaire, who discussed his new book on gardening “Oh La La” and shared his career highlights which positioned him for his present status. Ciscoe then answered questions from our BBRC Zoom viewers for about 30 minutes (most of which were after the meeting officially ended)!

Ciscoe’s plan was to release his new book in late January, shortly before we all prepare our gardens for planting. However, the release was shortly before COVID-19 became an issue and that of course has impacted sales. But if you are a dedicated gardener, Ciscoe has many tips that will help your garden be the talk of your neighborhood!

Starting at Seattle University in 1978 as the foreman in charge of landscape maintenance, Ciscoe was the first full-time gardening professional and non-Priest to have that responsibility. Although Seattle University originally had great landscaping, it had been put in and then neglected for the next 10 years. Ciscoe shared how he, along with a group of 8 student gardening enthusiasts, went to work at the end of that era and rid the campus landscape of weed trees, eventually bringing it back to its original glory.

Ciscoe also discussed his radio career (started over 30 years ago) and then his TV shows. Ciscoe was on Northwest TV News for 15 years with Meagan Black. Anyone who watched those shows recognized the great chemistry they had! Ciscoe’s first TV host was Jeff Probst on the Northwest Home and Garden show. Jeff is now the Emmy Award winning host of the US version of the reality television show Survivor! That was the first TV show for both Ciscoe and Jeff! Jeff even states in an interview “I owe a lot to Ciscoe! I am so glad he found his way to that show so many years ago.”

And for your gardening tips, go and buy Ciscoe’s new book for yourself, for your Dad for Father’s Day or any friend or family member that enjoys gardening!

Our meeting was opened by President Desiree who also introduced the guests and visiting Rotarians. Included with the visiting Rotarians was incoming 2020-2021 District Governor Catherine Gibson. Neil Bretvick did a fine job of doing the invocation and pledge!

Brian Evison gave us an idea of his professional challenges these days leasing planes through Dubai Aerospace. Brian is responsible for interfacing with North American airlines and shared the challenges facing the airline industry as about two thirds of their planes are presently grounded!

The meeting was adjourned at 830 AM but then Ciscoe was kind enough to answer questions until almost 9 AM for those who stayed. If you did not join us, you missed a great show but Kim Dreiblatt, BBRC Club Administrator recorded it and you can watch it by using the link above!

Ciscoe Morris is a gardening expert, TV and radio personality, and author. He is known locally for his TV and radio programs "Gardening with Ciscoe" as well as his enthusiastic demeanor and catchphrase "Oh la la!" Previously, he wrote articles about gardening for the Seattle PI before it ceased print operations and, in the Seattle Times, before leaving to focus on his new book which was just completed in January titled “Oh, La La: Homegrown Stories, Helpful Tips and Garden Wisdom”.

Ciscoe was born in Wauwatosa, Wisconsin to vaudeville performers where he gardened with his mom and grandma. At age 10, he began working professionally as a gardener for a local church. In 1972, he hitchhiked to Seattle and began working on a fishing boat. He later got a job at Seattle City Light and studied horticulture at South Seattle Community College.

In 1980, Morris began working at Seattle University where he introduced the use of beneficial insects rather than pesticides. Morris' media career began in the 1980s by filling-in as the host of a gardening question-and-answer radio show on KIRO after joining radio host Jim French on his show. Later that decade his TV career took-off on the KIRO-TV program "Northwest Home and Garden Show", hosted by Jeff Probst.