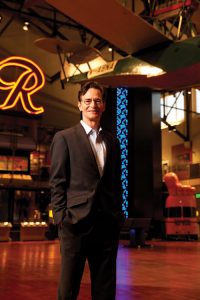 Executive Director Leonard Garfield will give us a peek into the past, present and future of the Museum of History and Industry located in Seattle’s South Lake Union. After hearing Leonard, you will most likely want to see the bigger picture and visit this superb museum on the history of the Pacific Northwest, State of Washington and Seattle!

Below is an excerpt from SEATTLE MAGAZINE, from which Leonard received the 2014 Executive Excellence Award:

“For a man who runs a resource dedicated to Seattle’s past achievements, Leonard Garfield thinks a lot about the city’s future.

Some of that future is about his own Museum of History and Industry, or MOHAI. Garfield oversaw the recent move from the museum’s longtime home in Montlake to a new home on the south shore of Lake Union, refreshing its exhibits and bringing together its scattered collections to a new resource and conservation center in Georgetown.

“We’re reaching record numbers of visitors and students,” says Garfield, “and we want to extend even further. It’s a long-term commitment.”

But he doesn’t see those exhibits and resources as frozen in time. “We look at history as something that is happening today,” he explains. “We are making history.”

As we confront issues from improving schools to transportation, Garfield believes that MOHAI’s records of the past provide ideas and explain how things became as they are. “History is a tool we can use as a community to make better decisions going forward.”

Garfield sees the museum’s initiatives, including the new Bezos Center for Innovation, engaging the 25,000 students who now visit annually. “They cannot only connect with the story of where we’ve been, but [also] get excited about where we are going.”

Leonard Garfield is Executive Director of Seattle's Museum of History & Industry, an award-winning history center with a collection of 4 million historic artifacts and a robust schedule of exhibits and programs related to the history of Seattle and the Pacific Northwest.
Leonard Garfield led MOHAI in the move to a new museum at Lake Union Park and a new Resource Center in Seattle's Georgetown neighborhood, both of which opened in 2012.
Before joining the museum, Leonard Garfield served as director of the King County Office of Cultural Resources (now 4Culture) from 1993-1999; served as Washington State Architectural Historian from 1985 to 1993; and was Wisconsin State historian from 1978 to 1985. Among other writings, he is co-author of Built in Washington, an architectural history of Washington State published by WSU Press.
Leonard has a BA in History from the College of Wooster and an MA in American Culture from the University of Michigan.