"My Fight and Flight to Liberty and Freedom" 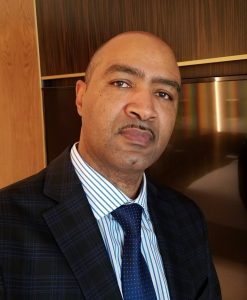 Today’s speaker will be sharing his life story, an incredible story starting in his birth country of Eritrea. A number of years ago BBRC hosted and heard the beautiful singing of his 3 daughters, The EriAm Sisters (thanks to Rourke O’Brien)! Today we will hear Mulu’s story of his life, a presentation you will not want to miss!

It is the story of an 11-year-old Eritrean boy – Mulu – who grew up in “Piccolo Roma ” Asmara, the charming capital city of Eritrea, filled with Roman architecture and Italian gelato.  The serenity of this Italian colonial city disappears as Mulu flees the capital, only to find himself in the jungle, an AK-47 on his hip, being hunted by the mightiest army in Africa, with the support of Russia and Cuba. A war that cost the lives of hundreds of thousands of people, Mulu navigates a life of war and music. When he finds an opportunity to leave the country, he jumps at the chance, landing in the middle of the Red Light District in Amsterdam.

Confronted with an unfamiliar culture and social order, he struggles to overcome the new challenges of assimilating to European life. Isolated and lonely but supported by dedicated volunteers in the small town of Mepple in the Northern part of Holland, he sets his eyes on further unrealistic goals. This story tells a thrilling tale of a young Eritrean child soldier’s journey, from bush warfare in Eritrea, Human smuggling operations in Khartoum, to navigating the social and cultural complexities of European life, and finally his path to tasting the American dream.  In his soon to be published book, written from 40,000 feet, the story is expertly recounted whilst traveling en-route, as the Regional Marketing Director at the world’s largest airplane manufacturer, The Boeing Company.

"I never had a dream of working in Aerospace engineering, nor have I ever been wowed by airplanes or airplane designs. Yet, here I am, an Aeronautical Engineer by profession, having spent the last 30 years working in the Aerospace industry. Looking back, I wouldn’t have it any other way. I learned success in life is not always dependent on what your dream is but often on your capability to execute a life plan.
The plan I followed laid a path for me to work for one of the greatest companies in the world, The Boeing Company. I am currently a Regional Marketing Director for the Boeing Global Services, responsible for overseeing and leading marketing activities in the Middle East, Africa, Central Asia and Russia.
I began my career in various technical engineering roles at Fokker Aircraft Company, Transavia Airlines and KLM Airlines in the Netherlands and BF Goodrich Aerospace Everett. However, a Product Management position I took at Boeing unlocked a new capability. Understanding customer’s pain and designing products/solutions quickly became my new found obsession. I travelled the world convincing airline executives to pay a premium for the products I designed. The breadth and depth of knowledge I acquired in this role invigorated a passion for sales and marketing which I now apply to all Boeing products.
At the heart of it all, I am a husband and a father. I have had the pleasure of admiring my three daughters as they realize their own dreams; becoming semifinalists on America’s Got Talent as a pop-trio, the EriAm Sisters, and establishing their individual careers. I am currently documenting my story in a soon to be published book while trying my hand at starting a vegetable garden and contemplating a variety of retirement plans with my wife."