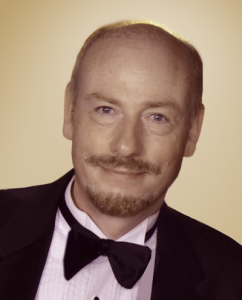 This was Wendi Fischer’s first official meeting as our new President.  The wickedly talented Josh Stewart revved up the excitement on this beautiful Friday morning as his deft fingers flew across the piano and we all sang along.   Light Up Rotary.   City of Bellevue’s Youth Sports Program.  Monthly Sponsorship Opportunity for BBRC Members.   Fun With Our New Sergeant-At-Arms, Tim Leahy.

This was a sing-along we will never forget as Josh Stewart, husband of BBRC member, Carmela Ramaglia, opened with a rousing rendition of Elton John’s Crocodile Rock.   He then changed his tune and beckoned Wendi and eight unsuspecting guys (Kit Bowerman, John Schwager, Neil Bretvick, Michel Carter, Kim Shrader, Sheldon Sweeney, Fred Janssen and Jim Gordon) to come up front while he sang and played You’ve Lost That Loving Feeling.  It was hysterical to watch the guys on bended knee begging Wendi to recapture her loving feelings. Josh  followed with the #1 requested vocal, Great Balls of Fire, by Jerry Lee Lewis.  Goodness, gracious, great balls of fire!  And then on to Bennie and The Jets, the song with lyrics nobody can remember, including us.   Josh was unstoppable as he quickly followed with Bumble Boogie.  He ended his brief show with Piano Man, playing both the piano and harmonica without breaking a sweat while we sang along and filled in the lines which Josh didn’t sing. Although the piano is his primary instrument, Josh also plays drums and reeds.  If you want to sing along with Josh again, go to Sluggers Kirkland on Saturday night.

Carmela gave the following invocation, a poem by e.e. cummings:

“Almost anybody can learn to think or believe or know, but not a single human being can be taught to be.  Why?

Because whenever you think or believe or you know, you are a lot of other people: but the moment you are being, you’re nobody-but-yourself.

To be nobody-but-yourself in a world which is doing its best night and day to make you everybody else means to fight the hardest battle which any human being can fight, and never stop fighting…..

Does this sound dismal?  It isn’t.  It’s the most wonderful life on earth.”

We can also achieve the following optional goals:

Wendi asked us to focus on member quality, not quantity and to share our Rotary story.

Joellen Monson presented a $2,000 check from the BBRC to Ted Mittelstaedt, who runs the City of Bellevue Youth Sports Programs.  The $2,000 will be used for kids’ scholarships to attend summer camps.   Ted thanked us for the check and spoke about how the Bellevue 10K event builds healthy communities.   He promised to help us promote the race and navigate the City’s bureaucratic maze.

Katherine De Stephano asked for BBRC members to sponsor the Club’s donation to Rotary First Harvest that we make in the name of our speakers.  Traci Tenhulzen agreed to be the sponsor for July.  In addition, the following Rotarians signed up:  Katherine De Stephano, Scott Hildebrand, Jim Gordon, Ann Norman, Nic Wildeman, Kit Bowerman, Francine Weaver and Fred Janssen.   There are only three months remaining to cover the entire Rotary year.    Email Katherine at Katherine@escapeoutdoors.com to reserve your month.

Fun With Our New Sergeant-At-Arms

Our new Sergeant-At-Arms, Tim Leahy, began his year with a bang.   He called on Steve Goldfarb to represent the Blue Team and John DeWater to represent the Gold Team in Name That Tune.   One half of the room was rooting for Steve and the other half was cheering on John.   Steve and John had to guess how many notes they needed to hear from a TV show’s theme song before they could guess the tune.   The winner was the one who could correctly name the tune by hearing the fewest notes.

This got really interesting when Tim described the TV show in enough detail for Steve and John to bet they could guess the theme song without hearing any notes.   It was a hoot!

1.  John Schwager is looking for a total of 25 sponsors and 120 golfers for the BBRC Charity Golf Classic to be held on Monday, September 8 at the Eagle’s Talon Course at Willows Run.  Kit Bowerman is seeking auction items for the golf tournament.

2.  Steve Peters announced that the Major Grants Committee is seeking worthy organizations to apply for grants.  Send information to him or Adam Mihlstin.

3.  Paul Martin thanked the Club for the flowers and card he received while recuperating from back surgery.

5.  Chuck Kimbrough announced that October 4 is the date of our Adoption Party.  Mark your calendars.

Be bright, be brief, be done.

With a career spanning more than three decades, piano entertainer Joshua Stewart continues to delight audiences with his ability to perform popular songs from any decade. A popular performer at northwest Dueling Piano Clubs - Chopstix, 88 Keys and The Barrel Room - Joshua was invited to bring his signature piano show to The Varsity Grill in Tacoma. In less than a year The Varsity Grill Piano Show was voted the number one venue in Tacoma for parties and events.

“Josh isn’t just a great player and great singer, he is a great piano entertainer. One of the best in the business!”

Based on his ‘standing room only’ piano shows, Joshua was asked to serve as a celebrity judge for the “Dancing With the Stars” at sea competition for Holland America.

Currently Joshua performs at corporate events, weddings, and other special occasions as half of the Chopstix Dueling Piano Roadshow. And every Saturday night you can find Josh rocking his solo show at Sluggers Sports Bar in Kirkland.

Joshua’s musical path began at age 6 when his mother, a coloratura soprano, and father, a local band performer, began encouraging him to develop his talents. Joshua was one of several young pianists invited to a private workshop at Westminster College with famous jazz pianist George Shearing. With his three brothers, Joshua moved to Los Angeles and gained a following performing in rock, jazz and blues clubs. His keyboard session work has been featured on songs with over half a million downloads worldwide.

In the world of performing arts, Joshua taught musical theatre at the University of Utah and was musical director for productions at Kingsbury Hall. He composed the musical score for Glutton for Punishment, Resurrection, The Contract, and the feature film She Lives By Night, which received worldwide distribution.