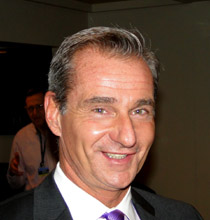 John Martinka introduced Gordon Prouty, the head of Puget Sound Business Journal.  Gordon emphasized that the core values at PSBJ are timeless and should never change, however, successful operating principles never stop changing.  Their mission is that they are the central source of business intelligence in every market they serve. PSBJ does hundreds of events each year to keep the connection with businesses alive in our area.  Ann Norman thanked the entire committee responsible for our exchange program then introduced Lenny, our exchange student from Germany.  John Martinka announced that two weeks ago our most current project in Antigua was approved.

John Martinka introduced Gordon Prouty, the head of Puget Sound Business Journal. He has been in that role for two years and enjoys being part of the business community in Seattle.

Puget Sound Business Journal reaches customers through their book of lists, four daily emails, weekly print publication, smart phone apps and their website. They are reaching people with more content and in more ways than they ever have before.

American City Business Journals (ACBJ) works in 43 markets and is headquartered in Charlotte, North Carolina. Their mission is that they are the central source of business intelligence in every market they serve. PSBJ does hundreds of events each year to keep the connection with businesses alive in our area.

Readership of the PSBJ has remained steady and even grown slightly over the last year. Growth has occurred primarily through new media avenues. In planning for growth ACBJ held focus groups all around the country and they learned that they were not perceived as “breaking news”. They realized that impression needed to change. This drove them to new media.

In making that change, they didn’t want to lose readership of their weekly paper so they refocused attention on that as well. Consumption of media is different depending on the type of media you are using. There is a “lean in” approach for new media where people want fast breaking news and a “lean back” approach to print material where you are looking for a deeper dive into the news.

Writers are busier than ever, writing for the weekly publication, but also posting 3 – 4 blog posts every day. Writers get feedback daily on their blog posts the instant access to readership statistics. PSBJ just added a new position in the office solely focused on engaging people through social media such as LinkedIn, Facebook, Twitter, etc.

They are constantly focused on growing their audience but really on growing the right audience, business leaders. In the next year there will be a redesign of the look of the print and the new media products.

Five years ago, 80% of PSBJ’s revenues came from print advertising. Today, that is much different. They are continuing to focus on print revenue but recognizing that digital advertising is critical. Advertisers want integrated, customized solutions and PSBJ is responding to that.

PSBJ is confident of the future because of its focus on local business news and resources that business leaders cannot get anywhere else. They are constantly looking for feedback and encourage it.

4) What Bill Gates didn’t enjoy as CEO of MSFT

1) Costco back in forefront of minimum wage debates

Patty Payne, who accompanied Gordon to our meeting, mentioned that Gordon has done an amazing job with outreach and made the PSBJ a “people paper” and she is proud to work for him.

Steve Luplow gave our invocation and led us in the Pledge of Allegiance.  Tanya Franzen introduced  guests & visiting Rotarians.

Martin thanked the club for its support while he was sick. Martin introduced Ann Norman who thanked the entire committee responsible for our exchange program then introduced Lenny. He mentioned that his

real name is Leonard but he really prefers Lenny. He is from Gertingham, Germany which is in Saxony. He is the third child in a family of six total, including his parents. He comes from a town that boasts a large university of 26,000 students. He lives in a beautiful large home and his family shares that home with another family, which seems to be a more common practice there.

Lenny is an expert table tennis player and has already won a tournament here in the US. Lenny enjoys sports and has attended Seahawks games with the Kremen family. He attended the state fair and loves going to the Bellevue High School football games.

Last weekend Lenny attended the district 5030 exchange student orientation weekend. He said that in Germany the exchange program is far more active and much larger than it is here.

Lenny knows the way to a Rotarian’s heart and he brought loads of German candy which he put on each of the tables.

Lenny would very much like to go to the Space Needle and attend an NBA game, particularly a Los Angeles Clippers Game.

Articulate, handsome, personable and ambitious, Lenny invited a young lady to homecoming last week – in the middle of AP Biology – and she said YES!

Martin continued his report by updating the club on the project in Columbia. For the first time, the village in which they worked has potable water. He thanked Fred Janssen and John Schwager who traveled with him to Columbia to ignite this project and ensure its success. The water project was blessed by the local priest and is now in active use by villagers. There is now a large billboard in the area promoting Rotary and helping to encourage further work in the area.

On that note, Martin mentioned that there is another water project looming and he will be heading down there soon to determine whether this is a project that the BBRC could become involved with.

Martin introduced John Martinka who announced that two weeks ago our most current project in Antigua was approved. He updated the club on the changes to the Rotary International major grant program. After months of negotiating this frustrating process, we received approval.

The RI Foundation is focusing on sustainability in project work. The Antigua project is a multifaceted project which will have tremendous long-term effects on the area.

Scott recognized Jeanne Thorsen for her longtime involvement in Rotary as she resigns from the club and retires from the library system. Jeanne is excited about her retirement and will spend a lot of time on her bicycle.

Dave Barry – We journalists make it a point to know very little about a wide variety of topics. This is how we stay objective.

Gordon Prouty was named Publisher of Puget Sound Business Journal in June 2011. Prior to joining Puget Sound Business Journal, he was the Advertising Director for the San Francisco Business Times, a sister publication. Gordon is a veteran advertising and sales executive with experience in classified sales, national and major accounts and business development. He is a graduate of Syracuse University