Return of the USS Razorback 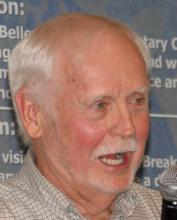 Jim Gordon introduced Bob Oppel, a submariner who served on a diesel sub and helped bring that sub back to the U.S.  When Bob heard that the Razorback would be destroyed, he went to work to bring it back to the US as a living memorial to submariners and the era in which it served.  Bob Holert introduced our student of the month, Giovanni Sanchez of Sammamish High School. Ghirish gave an update on the 10k, which is just over a month away.

Jim Gordon introduced Bob Oppel, a submariner who served on a diesel sub and helped bring that sub back to the U.S. Jim said the sub was vintage World War 11, leaving the club members to wonder whether world wars numbered higher than two were a figment of someone’s imagination.

Bob explained the difference between the diesel sub he served on, the Razorback, and today’s nuclear powered boats. The older subs could navigate as easily on the water as under it. By contrast, ships in today’s “nuke” fleet are designed to be underwater craft primarily.

He explained that he was a pole vaulter in high school and had an opportunity to attend college at Occidental College, but gave that up to join the Navy as a submarine sailor, just as his father had done during World War 2. He said that some 55 subs and 4,000 men on those subs were lost in WWII and that submarines were a major part of the US counter-offensive against Japan in response to the attack on Pearl Harbor in 1941.

The boat on which Bob served was known as the Razorback, having been named after a whale. The boat is a snorkel boat, meaning that it could access fresh air by means of a tube that would be extended above the waterline. Aside from its relatively cramped dimensions (300 ft x 17 ft) it accomodted a crew of 40-50 men.

Bob described the camaraderie of the crew during 80 days at sea not seeing the sun nor showers the entire time at sea. He said the menu on the sub was the best for the first part of a deployment. “We ate better than anybody else in the military, bar none,” Bob told the club. The issue was that there was very little storage on the boat and, as food was eaten, there were lots of cans and other preserved foot at the bottom of the pile.

The dress was very lax on subs, not beholden to the normal military dress code. Also, engines were loud enough to deafen those who worked in the engine rooms. The days on a sub were not divided like days at port or at home- they were divided by watches, where crew-members would often share bunks serially- called hot bunking. One watch was followed by eating, sleeping and so-forth.

After the Navy, Bob served in Southeast Asia with Caterpillar, where he lost track of the Razorback until he happened upon it as a boat in the Turkish Navy. As commander of the submarine retiree force in Seattle, he heard about the old sub and the Turks’ desire to destroy it.

When Bob heard that the Razorback would be destroyed, he went to work to bring it back to the US as a living memorial to submariners and the era in which it served. Enter Governor Mike Huckabee of Arkansas, who was one of the few to respond to the idea of bringing the sub back to American water. Even though the sub’s nickname was for a white whale, the sub was associated with the mascot of the Razorback State- Arkansas- which is a pig.

After numerous negotiations with the Turkish government, Bob and his team were given 45 days to get the sub out of Turkey to the US. The original plan was to crew it back to the US, but because some pieces and parts had to be stripped off for security and other reasons, it had to be towed. In fact, the batteries on board were salvaged and sold, and accounted for a significant amount of the proceeds needed to tow it back.

Bob was passionate in his description of re-entering the sub with Turkish naval personnel. He described its condition in detail and told of the quiz he was given by his Turkish escort regarding the position of instruments and the operation of those instruments. He explained that, to be qualified on a sub, crew members had to demonstrate their proficiency blindfolded.

Bob and his partner were thrilled to find the sub in such good shape and even commented on two marks on the wall, indicating two kills for the sub during a conflict with Greece.

The Turkish sailors gave pins to Bob and his partner, indicating proficiency on the sub, which Bob proudly wears on his vest indicating membership in the retired submariners auxiliary in Seattle.

The sub came across the ocean in fine shape with Bob and his partner on top of, and inside the sub from time to time. The sub was eventually towed up the Arkansas River strapped to barges that allowed it to duck bridges and stay high enough in the water to not drag bottom. The ship is now anchored in North Little Rock on the Arkansas River for the public to see and tour.

In April, the powers that be hope to once again crank the engines that will billow that “beautiful” black smoke, according to Bob. The boat is a historical monument and remains in the same condition as it did when it was in service.

Bob was presented with a certificate memorializing a gift, in his name, of 1,000 pounds of fresh produce for Rotary First Harvest, provided by Jeff Cashman.

The meeting was called to order amid the strains of the Beatles’ “Yellow Submarine” by President Chris Monger, who encouraged the entire club to sing along. Chris commented that the song should be an example to other groups who should let their drummers sing more.

Francine Weaver gave an Irish blessing and led the club in the pledge of allegiance. Kevin Jewell introduced visitors; there were no visiting Rotarians.

The Norm Johnson memory book was passed around the room to afford members to write a remembrance of Norm.

Bob Holert introduced our student of the month, Giovanni Sanchez of Sammamish High School. Giovanni works at Glendale Country Club and as worked since he was 15. His passion in life is soccer- he plays on a select team and on the high school team as well. His community service includes coaching soccer for middle schoolers and other kids. He said that he loves to help kids. He will attend Arizona State University in the fall where he will play, you guessed it, soccer. Giovanni and his family are proud that he will be the first in his family to attend college.

Ghirish gave an update on the 10k, which is just over a month away. He said that we have 192 runners this year, which is short of where we were last year. Ghirish encouraged all of us to sign up to present the event to Rotary clubs in the area. He also encouraged members to visit running stores, gyms and other outlets that may be interested in promoting our event.

Wendi Fischer encouraged members of the club to come to Coeur d’Alene, Idaho for the district conference. Members who attend will be treated to a James Bond- themed weekend featuring special events such as a vodka and caviar tasting party. Please support our (really) outgoing district governor, Steve Lingenbrink and attend. Scott Sadler added that the club retreat will be held at Coeur d’Alene on the Saturday of the district conference.

THOUGHT FOR THE WEEK
Some ships were designed to sail, others require our assistance.

Bob became fascinated with WW11 diesel electric submarines while listening to his father talk about his experiences during the War. When he graduated in the late 50’s he joined the Navy, volunteered for and was accepted into the Submarine service. One of his first Submarines was the USS Razorback SS-394 stationed in San Diego. She was built during the war and had several successful war patrols against the Japanese in the Pacific.

Bob made two cold war patrols on the Razorback and had the opportunity to travel to several countries in Asia. After three years he transferred to the USS Archerfish SS- 311. He knew the Razorback was transferred to Turkey and had been renamed the SS Murat Reis but had assumed she had been scrapped as most of the old WW11 diesel subs have been. He was surprised when he found out she was still alive and very active in the Turkish Navy as the longest operating submarine in the world. Their submarines were designed for an active life of 20 years and she was already 61 years old.

What started next was the quest to return this beautiful WW11 hero home to the US, a feat that had never been done before. He and his team were told several times it could never be done but after several trips to Turkey, over a three and a half year period to work with Turkish and the US Government personnel, Bob and crewmembers at last were given permission to go to Turkey to bring the Razorback home to a hero’s welcome.

Bob will explain what life was like working and living aboard an old diesel submarine and how a crew of 66 lived while submerged up to 89 days in a confined space of only 17 feet across and 300 feet long, as well as how they managed to bring this beautiful Lady home.