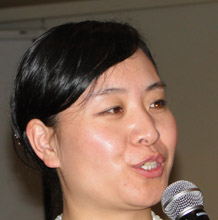 The BBRC leaned about the Art and Music of ancient China during a presentation by representatives of the Shen Yun performance Company.  Aly Wilkin is our student of the month from Bellevue Christian School.  We inducted our newest member of the Bellevue Breakfast Rotary Club, Tanya Franzen-Garrett  Christine Rose emphasized that we need more involvement with the Bellevue 5K/ 10K run/walk to be held on April 28, 2013.

We learned much about the Shen Yun performance Company. The Companies’ unique mixture of orchestra and traditional Chinese instruments relies on 5000 years of Chinese culture and musical history. Shen Yun 2013 will visit Marion Oliver McCaw Hall on March 28-30, 2013. Shen Yun is based in New York City, designs an entirely new show for its many touring companies each year, and has visited Seattle six times since its inception. The discussion described the significance of the world’s premier Chinese Dance company to Chinese culture and history. Interestingly, Shen Yun has not been allowed to perform in Mainland China, primarily since the focus on traditional Chinese music and culture is still disfavored by Communist China.

China was formerly known as the Heavenly Dynasties. The culture of China is fraught with myths and legends. The three major religions—Taoism, Confucianism, and Buddhism—permeate every aspect of traditional Chinese society and culture. Under their spiritual beliefs, the Chinese people created the only uninterrupted civilization in the world. However, due to the social and political changes in the 20th century, namely Communistic Rule, much of this cultural and historic tradition has been lost. To reclaim the treasures of traditional Chinese culture, Shen Yun Performing Arts has toured to hundreds of cities in more than 20 countries, astounding the world with artistic excellence and deep inner meanings.

To fully appreciate the beauty of classical Chinese dance, one must possess certain knowledge about the cultural ideals and artistic conventions of ancient China. In her presentation, Ms. Jenny Hu addressed such issues as the characteristics of Classical Chinese dance, its philosophical foundation, and major components of Shen Yun’s performing arts. She also discussed the social background against which Shen Yun Performing Arts rises. The musical and dance performances are World class, and have received numerous awards.

Members and Guests were greeted by Christine Rose and Steve Vincent.

Christine Rose gave the following invocation: Writer Annie LaMott breaks down prayer into three simple words: Help, Thanks, and Wow. Help, may eternity in the hearts of us all be moved to call for help when we need it and to be of help when we can. Thanks – may our hearts open as we feel and express gratitude and focus on blessings, refraining from the evil twins of complaint and criticism. Wow, may we often notice what is awe inspiring and be stunned silent.

The Student of the Month from Bellevue Christian School is Aly Wilkin. Aly has maintained a 3.55 average, which has allowed for a National scholarship. She does frequent work for Bellevue Christian Hospital, and has even started her own business, “Little Cookie Bakery”. She appreciates being able to talk freely about her faith. She has traveled extensively to Burma and Thailand, and grows up with great respect for teachers, and would likely want to become one herself.

This morning, we inducted our newest member of the Bellevue Breakfast Rotary Club, Tanya Franzen-Garrett. Tayna attended with

her husband, Michael Garrett. The couple has three children. Tanya has been a Real Estate Professional for Windemere for the last seven years, and is an active member in the community. She has traveled extensively internationally growing up, and is very active. Steve Lingenbrink is her sponsor, and Sayoko Kuwahara will be her mentor.

We need more involvement with the Bellevue 5K/ 10K run/walk to be held on April 28, 2013. Christine Rose requested that club members get people signed up as volunteers, sponsors, or participants. Questions can be directed to the Website, or bellevuerun.com. BBRC has always enjoyed active sponsor participation from many area corporate and other sponsors, setting up a booth at the event, and it always takes effort to bring in participating runners.

On Saturday, February 23, there was a Celebration for the Life of BBRC member and former President Norman Johnson at Mercer Island Presbyterian Church. Norm leaves behind his wife Carolyn. Norm was an engineer by trade, serving as the electronics engineer aboard the icebreaker Barton Island where he served in Greenland, Barrow Alaska, and Antarctica. He received a BS degree in Electrical Engineering from California State Polytechnic University, and upon graduation worked for IBM.  Norm eventually started his own business-System Technical Sales-on Mercer Island, selling bar code equipment and software. Along the way he also enjoyed life such as by founding and becoming active in the Schussbaumers Ski Club in Aspen, Colorado, where he met Carolyn Berg and was married 2 ½ years later. Norm and his family and High School friends continued to meet in Santa Barbara on a yearly basis, and that is where he passed away on January 13. The celebration was well attended by Norm’s family, BBRC members, Princess cruise ship lines employees, and friends..

Norm affected many people, including those at a “Great Books” reading club which met monthly to discuss Classical Literature.  Norm acted as the Supervisor for passengers and crews for Princess Cruise Lines on ships embarking for Alaska, always providing his infectious love of life. The Princess family definitely became part of Norm’s family. He supported some of BBRC’s most ambitious and positive projects, such as establishing the Spray Play Water Park at Crossroads Park. Norm’s life truly embodied the Rotary motto of Service Above Self, and he will be missed by the deep and varied set of friends he has developed.

Shen Yun is the world's premier Chinese dance company and is performing at McCaw Hall from March 28-30. Echo and Jenny will share with us the origin of traditional Chinese culture and classic Chinese dance and why it is now relinquished. They will discuss classic Chinese dance and how Shen Yun is now shouldering the mission to revive it and how Shen Yun can accomlish that. They will share stories of historic figures and ethnic groups across China in different dynaties.

Shen Yun Performing Arts Company is a non-profit organization with the mission of reviving 5,000 years of tradition and value of China, much of which has faded away. It is tasked with providing education about Chinese culture through performance. They have 3 groups that travel simultaneously around the world to share their culture and last year presented almost 300 shows at top theaters and performing arts centers in over 100 cities. They come back annually and 2013 is their 7th year.